Massive sculpture honoring migrants, refugees will be on display in Bayfront Park through early April

MIAMI | In South Florida, the boat full of refugees will rest on sand, in a grassy corner of Bayfront Park, facing Biscayne Boulevard and three blocks south of the Freedom Tower.

"Angels Unawares," a massive bronze sculpture honoring migrants and refugees, arrived from Atlanta the morning of Feb. 9, 2021. It was met by a crane and crew of workers from Florida Lemark who, after three hours of work, had installed it on the 24-foot long by 16-foot wide sand box where it will remain on display through April 8, 2021. 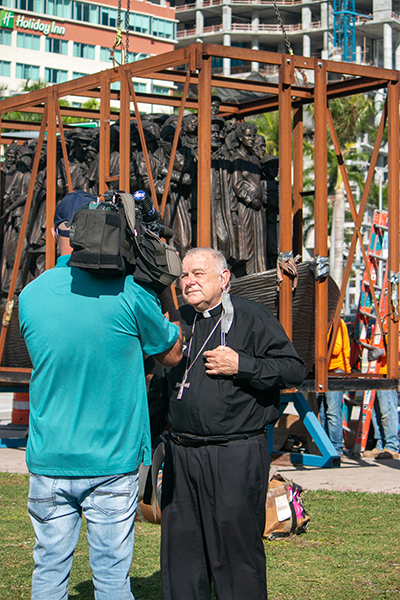 Archbishop Thomas Wenski gives interviews to local media as workers from Florida Lemark unload and install the sculpture "Angels Unawares" in Miami's Bayfront Park, where it will be on display through April 8, 2021. The installation took place Feb. 9, 2021.

The sculpture, a full-size replica of the one blessed by Pope Francis in 2019 and installed in St. Peter's Square, travels in a specially built steel cage which Prada described as "a work of art in itself."

The cage weighs 500 pounds and is connected to the sculpture’s base by 20 bolts. "All the load is transferred through the cage," Prada said, allowing the sculpture to be transported and moved without damaging the artwork, which weighs 9,000 pounds.

But before it’s freed from its cage, a worker must literally climb inside the sculpture, accessing it from underneath, to install the wings, which are stored separately and weigh 50 pounds each. That was accomplished by a technique known as cribbing: creating a temporary platform to support the sculpture a few feet off the ground.

Afterwards, the cage and sculpture were placed on the bed of sand, prepared a day earlier by Florida Lemark. Prada used a measuring tape to ensure the sculpture was placed exactly in the middle of the box, with the boat’s prow at a 45-degree angle, facing north on Biscayne Boulevard.

"My motto is measure twice, cut once," said Prada.

After removing the 20 bolts, the workers steadied the steel cage as the crane slowly lifted it up and away from the artwork.

“One of the nicest things about this was the teamwork that built up among the cities that are hosting it,” said Prada, referring to the help the Archdiocese of Miami received from the Archdiocese of Atlanta, where the statue had been on display throughout January.

Via several Zoom calls, Neil and Carolyn Johnson of Canonbury Homes, Inc. and Kensington Homes Preservation, shared their insights and experience in receiving and installing the sculpture in Atlanta. Deborah Brown of The Catholic University of America in Washington, D.C. — where “Angels Unawares” will find a permanent home once its tour of North American cities concludes — also was instrumental in connecting everyone, including the sculpture’s creator, Canadian artist Timothy Schmalz.

“And we’re going to do the same for the next town,” said Prada, referring to the sculpture’s next stop, Minneapolis, Minnesota. Before Atlanta, the sculpture had visited Boston, Brooklyn and Catholic U.

Archbishop Thomas Wenski will bless the artwork at 11 a.m. Wednesday, Feb. 10, before a small group of civic officials, including the members of the Bayfront Park Management Trust, who gave permission for the archdiocese to place the sculpture at that location.

The archbishop visited the site Tuesday morning to observe the installation.

“This was his vision to have it there, to give it high visibility,” said Prada.

As the archbishop noted on an Instagram post: “Miami is the South’s Ellis Island and a fitting place to host this sculpture that honors migrants and refugees.” 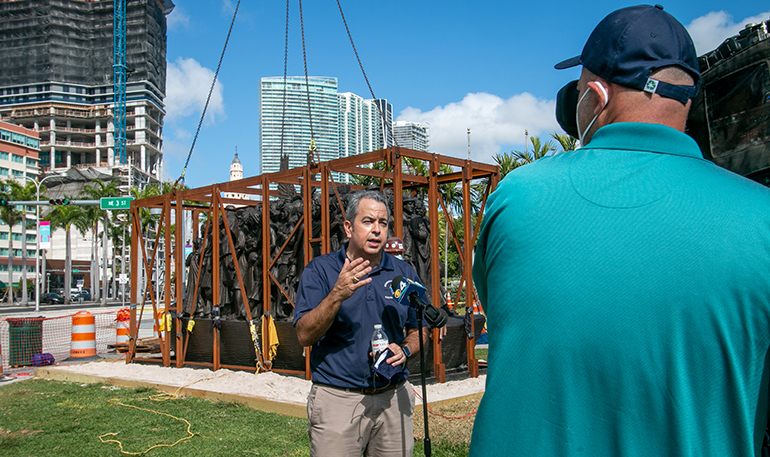 David Prada, archdiocesan director of the Building and Property Office, gives interviews to the media as workers from Florida Lemark finish installing the sculpture "Angels Unawares" in Miami's Bayfront Park, where it will be on display through April 8, 2021. The installation took place Feb. 9, 2021.