Relief for the ears

CORAL SPRINGS | During the peak of the coronavirus outbreak this year, numerous photographs showed medical workers with facial marks from extended use of masks and other protective gear. Less obvious was the pain from the tension those masks caused around the ears. 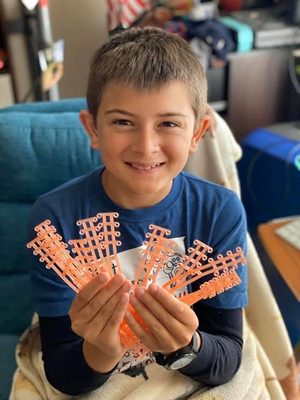 Dakotah Herald shows some of the plastic straps he produced via 3D printer to relieve ear pressure from face masks.

Photographer Tina DaSilva-Herald can relate. She specializes in photographing newborns, children and maternity in general. “I’ve been wearing masks with newborns, and it hurts,” she said.

An article on Facebook about medical workers' discomfort prompted her to research ways of helping. She discovered that people, including children, were designing and creating clips and straps from various materials that, when worn with the face masks, relieved the tension in the ears.

She shared the idea with her son, Dakotah, who eagerly help — and just as eagerly used a 3D printer he had been given a few Christmases ago.

He found a design on Thingiverse, an online platform said to be the world’s largest 3D printing community. It encourages the sharing of designs so that anyone can use or alter any invention. The ear relief device consists of four straps, each about six inches long and an inch wide. It is meant to be worn behind the head, with the face mask ear straps looped over it and adjusted for comfort.

“It’s called an ear protector, and I kind of altered it a little,” Dakotah said. “I put five of them at once so I could print five in about two hours.”

Using the thermoplastic feedstock that came with his printer, he began to print the ear protectors in blue and orange. When DaSilva-Herald shared the news of what her son was doing, two photographer friends donated black-and-white filament to print more straps.

“It’s been quite a collaboration,” she said.

When they had made more than 100, DaSilva-Herald asked on social media if anyone was interested. 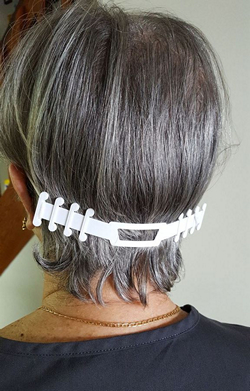 “We’ve had friends, we’ve had medical workers, firefighters, police and even strangers reach out to us, and they’re all asking, 'How much do you want for them?'", DaSilva-Herald said. "And I say 'Nothing. We’re donating it to everybody.'"

In May, the mom-and-son duo delivered 30 of the devices to the Cleveland Clinic in Weston. During a visit to their veterinarian's office in Lauderhill, they donated some to the staff. Each donation also includes a handwritten note: “Stay safe. Love, Dakotah.”

“They were so happy that they told us they would hug us if they could,” said DaSilva-Herald.

Dakotah added that the two even gave out some of the protectors to Chick-fil-A employees. “It feels really good to help people,” he said.

Dakotah, who will be entering seventh grade next fall at St. Andrew School in Coral Springs, is no stranger to creative ideas and designs. “He’s always, always, always building or constructing,” DaSilva-Herald said.

Earlier this year, Dakotah designed a rubber-band powered car that helped the school’s Robotics Team earn a first-place win at a STEM competition at Fort Lauderdale's St. Thomas Aquinas High School. “I know a lot about technology,” he said.

“I just love what he comes up with,” said St. Andrew’s principal, Kristen Hughes. “Sometimes he’ll show me something and I will ask, 'How did you think that up?' Sometimes it’s a very complex explanation, and sometimes he shrugs his shoulders and says, 'I don’t know.'"

"I tell him, 'You have to use those gifts from God wisely, Dakotah,' and he always answers, 'I know, I know.' ”

BELINDA M CASTANEDA - 06/19/2020 05:08 PM
Go,Dakotah! We are so proud of you! Thanks you for using your brainpower and resources to serve the Lord's people for His Glory. Tina, hearty congratulations! looking forward to seeing you soon, ms b Belinda Murray Castañeda, Youth Director, Saint Andrew Parish

Kristen Hughes - 06/17/2020 04:06 PM
Dakotah we are so proud of you! Thank you for sharing your gifts with so many of those who are helping others. God bless you and your family. Kristen Hughes, Principal Saint Andrew Catholic School