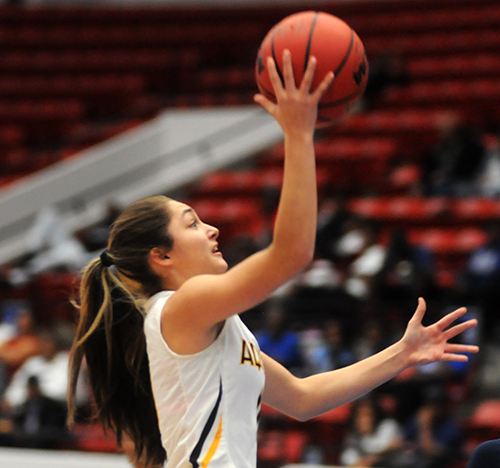 St. Thomas Aquinas junior guard Bella LaChance drives for a layup in the first half of Tampa Bay Tech's 58-52 overtime victory March 2 in the FHSAA Class 8A girls basketball state championship game in Lakeland. LaChance had a game-high 18 points for the Raiders. 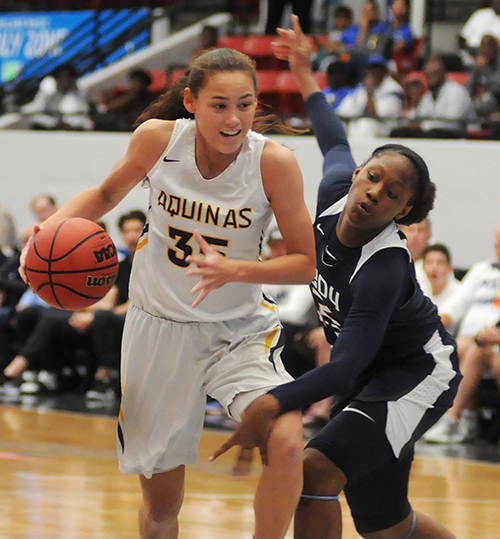 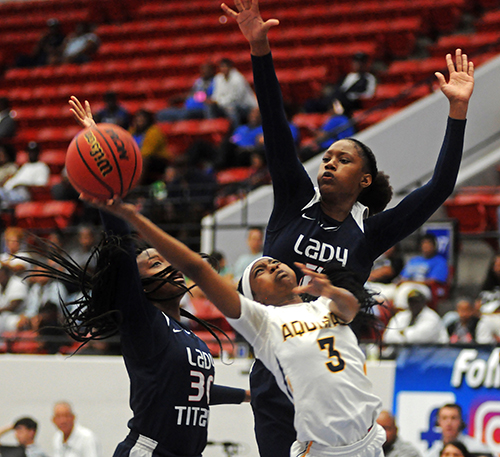 LAKELAND | Bella LaChance and the St. Thomas Aquinas Raiders battled taller Tampa Bay Tech and had a lead with 34.7 seconds left in regulation. But a called timeout when the Raiders had none allowed the Titans to force overtime. K’Nisha Godfrey scored 5 of Tampa Bay Tech’s 10 overtime points to lift the Titans to a 58-52 victory in the FHSAA Class 8A Girls Basketball state championship game.

Tampa Bay Tech threw four 6-footers, including leading scorer Janiah Barker, at the Raiders. The 6-foot-3 Barker finished with 17 points and 10 rebounds, while 6-1 sophomore Jayla Murray had 12 points and 12 rebounds.

“They were similar to some of the teams we saw in the She Got Game Classic,” St. Thomas Aquinas coach Oliver Berens said. “They had some tall kids, great post players â Forest Park (Ga.), St. Frances (Md.). Miami Country Day also has tall players. We did a good job of not making them enter the ball inside.”

St. Thomas Aquinas countered by sending LaChance and Hsu on drives into the lane to get them into foul trouble. LaChance finished with 18 points, while Columbia signee Abigail Hsu and Halie Murphy each had 10 points. Samara Spencer had eight points and four steals.

“They’re bigger guards,” LaChance said. “We noticed that they weren’t as quick on defense, so we could get around them easily. We could trust our skills, draw contact and get to the free-throw line.”

Tampa Bay Tech scored the first six points of the overtime, getting two Murray buckets and a Godfrey bucket. St. Thomas Aquinas got no closer than three points the rest of the way.

Tampa Bay Tech also had a 47-29 edge on the boards. Aquinas coach Berens said that Tech won by crashing the boards.

“We knew they were a great offensive rebounding team,” he said. “We cannot allow second-chance points. We did the best job we possibly could do. If we get one or two more rebounds, we might be sitting here with a smile on our faces and gold medals.” 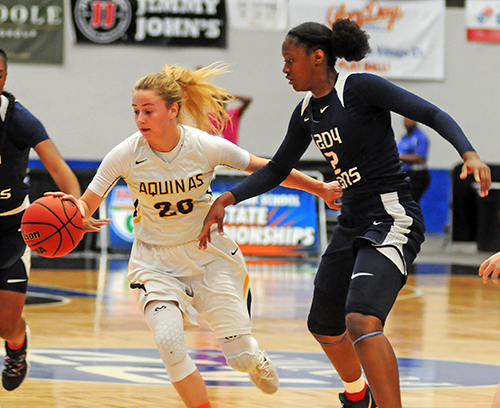 St. Thomas Aquinas advanced to the state final March 2 by beating St. Cloud 67-46 a day earlier. LaChance had 19 points to lead five St. Thomas Aquinas players in double-figure scoring as the Raiders routed the team they lost to in the 1994 Class 4A final.

The Raiders outscored St. Cloud 39-19 in the first half. Murphy added 14 points, Angelee Rodriguez had 13 points and seven rebounds; Hsu had 11 points and nine rebounds; and Samara Spencer had 10 points and six rebounds.

The Raiders wanted to improve over a region semifinal finish, so they did what St. Thomas Aquinas teams do â schedule the most brutal schedule they could. Four state champions dotted the Raiders’ schedule.

“We give props to coach Oliver for scheduling such a tough schedule to get us prepared for the postseason,” Hsu said. “It worked. We’re a different team than we were in the beginning of the season, and it showed. We all started playing together more, giving more on defense, doing the extra stuff.”

Aquinas won its season opener against Class 6A state champion Plantation American Heritage 58-33. The schedule got only tougher, featuring wins against both Class 7A finalists in 10-time champion Fort Lauderdale Dillard and Ponte Vedra Nease, losses against 5A champion Oxbridge and Class 4A champion Miami Country Day, and three losses against three playoff teams from out of state. 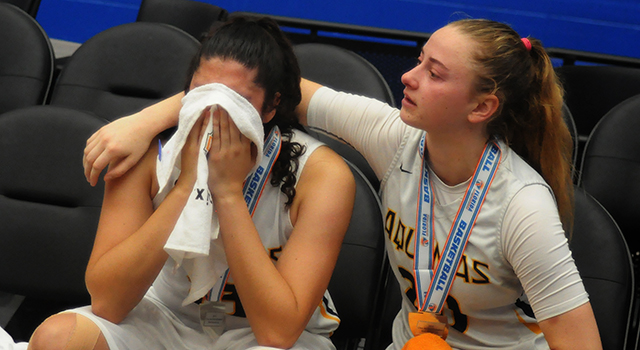 “At the end of the day, we want to schedule hard competition for two reasons: No. 1, our goal is to make sure our players are ready to play college basketball, to play at the highest level,” Berens said. “We want to give them an experience to where they go to the next level as better players and have to deal with more adversity, but also as better people. Also, we’re trying to win state championships.”

While LaChance said the American Heritage opener showed what the Raiders what they could do, Spencer credited the district tournament with spurring them on. All agreed, however, that more work remains. While the Raiders lose Hsu, Murphy and Alex Rizzi to graduation, much of their core returns for another run.

“It feels great to have gotten this far, but of course you want to win at the end of the day,” LaChance said. “Our team got a lot better throughout the season, and it’s great that we got year. Next year, we have to finish it.” 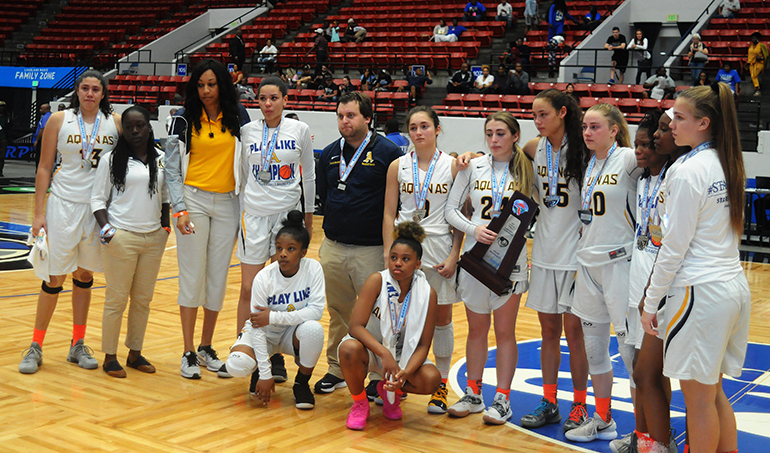 St. Thomas Aquinas coach Oliver Berens and his team pose with the state runner-up trophy after the Raiders lost 58-52 in overtime to Tampa Bay Tech on Saturday, March 2, in the FHSAA Class 8A state girls basketball championship game at the RP Funding Center in Lakeland.