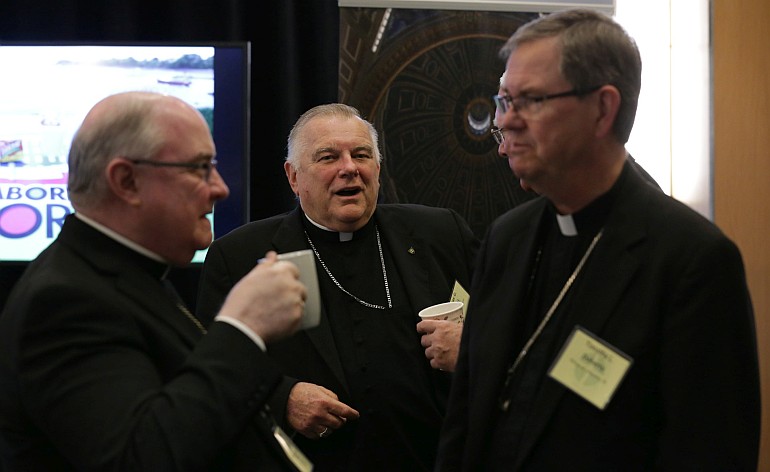 Archbishop Wenski chats with fellow bishops during a break at the spring meeting of the United States Conference of Catholic Bishops in Fort Lauderdale.

FORT LAUDERDALE | The weeklong assembly of the United States Conference of Catholic Bishops is the first time the group has ever met in the Archdiocese of Miami. Archbishop Thomas Wenski of Miami, the host for the conference, allowed himself to enjoy the victory. 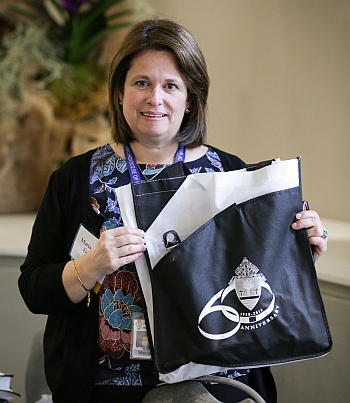 Maria Isabel Garcia, of the Office of Worship, shows one of the gift bags for attendees at the spring meeting of the United States Conference of Catholic Bishops in Fort Lauderdale.

He said he'd invited USCCB to South Florida years ago. The bishops meet every fall at the same place, Baltimore, but their spring meeting could be almost anywhere. This year, it was South Florida's turn.

"It's nice to bring them down here and make them a little jealous," he said with a slight smile on Wednesday outside the convention hall of the Marriott Harbor Beach Hotel. Then, remembering the weather that afternoon, he added: "But now it's raining a lot."

Archbishop Donald Wuerl of Washington, D.C., was philosophical about the weather. "There's a lot on the schedule, so we often don’t get to see the local Church while we're here," he said.

Not to worry: The local Church spread out the hospitality. Members of the archdiocesan Office of Worship handed out gift bags with the two anniversaries of the archdiocese: the 50th and the 60th. Inside were treats like granola bars and plantain chips.

The bags also had copies of the archdiocesan newspapers, both Spanish and English, plus the magazines of St. John Vianney College Seminary and St. Vincent De Paul Regional Seminary. Finally, each bag had a copy of "I Will Give You Shepherds," a CD produced by the St. Vincent De Paul choir. 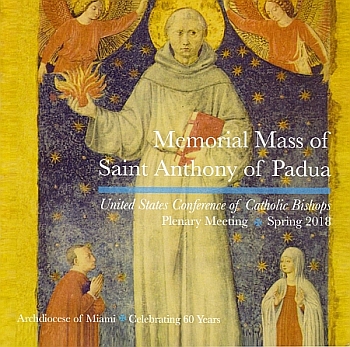 "It's lost a little of its charm," said the archbishop, a Byzantine Catholic prelate. He added tongue in cheek: "I haven't seen Annette Funicello or Frankie Avalon."

But more than that awaited the bishops at an afternoon Mass at St. Pius X parish, about four miles north of the hotel.

The liturgy book was a full-color, 40-page volume that was clearly meant to become a keepsake. Alternating with music and readings were quotes and pictures of St. Anthony of Padua, the saint of the day.  On the last 12 pages were words and photos recounting the archdiocese's six decades.

The archdiocese's music director, Gustavo Zayas, conducted a 35-voice choir drawn from churches in both Broward and Miami-Dade counties. The singers and the five instrumentalists led the congregation in classics like a Mozart and a Gregorian chant.

But that was only one facet of the archdiocese. At one point, a soloist sang a Spanish hymn, accompanied by acoustic guitar. And during the offering of gifts, women from Notre Dame d'Haiti Church in Miami danced up the aisle, their carabella dresses swirling.

"It's good to see the culture and art," Archbishop Skurla said.