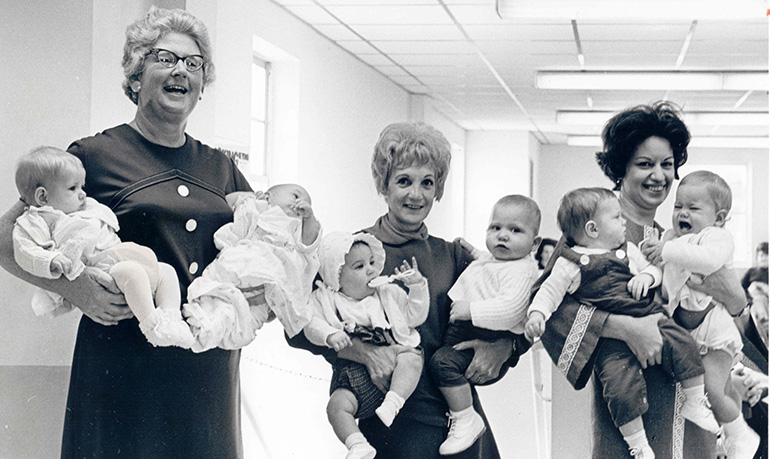 MIAMI | Catholic Charities of the Archdiocese of Miami has restarted a range of adoption services after years in suspension, now with an increased counseling dimension to ensure what’s best for the birth mother, baby and adoptive parents.

In doing so, it has returned to a foundational mission as South Florida’s first organization to offer professional welfare services to children. By 1945, the agency offered adoptions from Key West to Melbourne.

Catholic Charities reactivated its license this year with the Florida Department of Children and Families and officially re-launched adoption services in March as part of the existing counseling services.

Deacon Richard Turcotte, Catholic Charities CEO, said that when he took the helm 20 years ago the small, privately funded adoption program was waning for lack of funding. By 2007, it had all but dried up. About four years ago, the nonprofit began building an endowment to restart a continuum of adoption services. Now sufficiently funded, it will focus primarily on post placement counseling and home studies of potential adoptive parents for other agencies.

“The bottom line is counseling and family services was the foundation of Catholic Charities 86 years ago when Catholic Charities of Miami was incorporated. It has always been a nationwide foundation of Catholic Charities,” said Deacon Turcotte. “It’s Counseling and Adoption Services to give the picture that adoption is a continuum of services. We’re focused on two parts of that continuum. We’re not seeking birth mothers or adoptive parents but in the future, if a birth mother wants to put the child up for adoption, then we’ll work with them. And we’ll also be accredited through the Council on Accreditation.”

Claudia Gomez-Cardona, regional director of counseling services, said that the modernized program will focus on the healthiest option for the client, the birth mother, and the babies. The agency also will work in partnership with the archdiocesan Respect Life Office and other pro-life organizations.

“One of the main differences from the past is that we’re not going to be actively seeking babies to be adopted. It’s more like working hand in hand with pro-life agencies,” explained Gomez-Cardona.

The agency will offer counseling and support to help the mother decide whether she is going to parent or give the baby up for adoption, she said. Because those decisions will be made on a one-on-one basis, “it’s very hard to predict how many cases we’re going to have.” 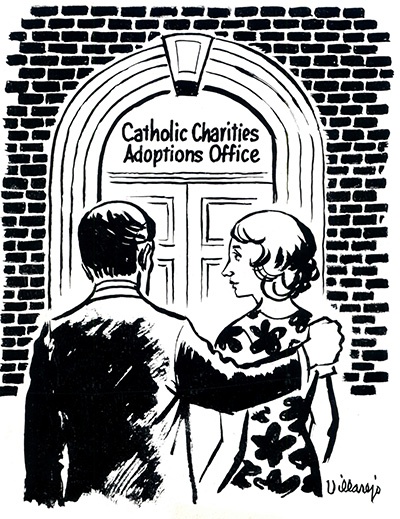 This illustration on file from a past edition of the Florida Catholic shows that adoption was always among the services provided by Catholic Charities.

Respect Life Office Director Joan Crown said she looks forward to referring interested clients. Even when Catholic Charities’ adoption program stopped, respect life made sure to refer women only to organizations that prioritize the welfare of both the birth mother and the adoption clients.

“We’ve had pregnancy centers for over 30 years. We’ve always known that the girl needs to make an educated decision before she chooses adoption or, God forbid, abortion,” Crown said. “So that is where adoption comes in for us, as far as the education part and planting the seed and getting her the proper counseling that she would need through these agencies.”

It’s important to have an agency that understands the lifelong impact of abortion, which is socially acceptable, while adoption is stigmatized.

“A person can choose to abort her child and society is all there supporting her but it’s not that supportive to those who choose adoption,” said Crown. “It’s a very difficult thing to choose a family to raise your child but if it’s the only thing that’s going to allow your child to thrive, if you’re in a situation where you just can’t do it, it’s the most unselfish, loving decision someone could ever make.”

The updated program will serve married heterosexual couples with domestic adoption focused on babies. Because it is not a publicly funded program, it will adhere to Catholic teachings. Open adoptions will be encouraged but the birth mother and adoptive parents will decide the child’s level of contact.

Gomez-Cardona reported that they’re receiving a lot of calls but are starting slowly.

“I’m assuming by next year when we get calls it will be a completely different response that we’re able to give them,” she said. “Thanks to the respect life and pro-life centers a lot of them are being more encouraged to parent.”

“Whether it’s a birth mom looking for an adoption class or looking to make up her mind about parenting or not, we do have counselors who are savvy in the adoption world,” Gomez-Cardona said. “We work with them post adoption because it’s a big loss for them.”

However, she added, “to be able to work with them and support them and possibly even guide an open adoption is a beautiful gift for everybody involved.”

Gomez-Cardona has both professional and personal reasons for being excited about the new program.