A century plus five 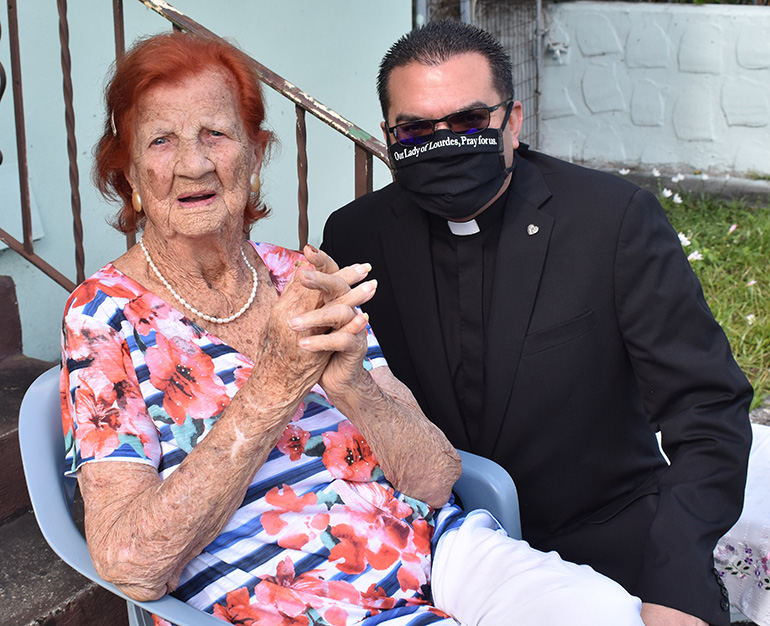 HOLLYWOOD | A small cream cake — almost too small to support its three candles counting out "105" — formed the centerpiece of a 105th birthday party.

Well, almost. The real centerpiece, of course, was Stella Waite, feted recently by Little Flower Church on her milestone.

She and her late husband, Paul, were parishioners at the church for more than eight decades, with Mrs. Waite managing the books and serving with its women's club.

"We helped build Little Flower," she said with a smile in the two-bedroom house she first saw in the 1940s. "We had a good time all the time." 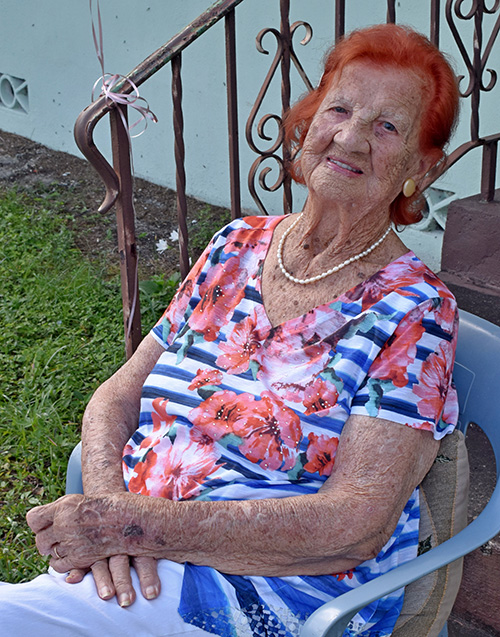 About 10 well-wishers attended the quiet celebration May 4, 2020, singing "Happy Birthday" before Waite blew out the cake candles. Father Javier Barreto, administrator at Little Flower, dropped by to bless the event.

For Waite, the priest had a brief comment: "She is a gift."

Waite got a visit from Hollywood city officials as well. Commissioner Peter Hernandez brought his birthday wishes, as well as a potted white orchid.

"We're very lucky to have you in Hollywood," Mayor Josh Levy told Waite. "You’ve seen the city grow, and you’ve helped make it what it is. You inspire us all to live healthy."

Peter Pazer, a family friend and lay minister at Little Flower, chimed in — "She's been paying taxes for 84 years!" — drawing laughs from the city officials.

Born on a farm in Ogdensburg, New Jersey, Waite was the second of five children. She had to quit school to care for her sick mother. As a young woman, she became a nanny to a family who wintered in Florida.

That's where she met Paul, a U.S. Army soldier, in 1940. It led to what she called "the happiest day of my life": their wedding the following year. It was literally the love of their lives: He died in 2010, after 69 years of marriage.

After World War II, Paul worked in the U.S. Postal Service and invested in stocks and bonds. The two built their two-bedroom house in 1946. Their child, Jean, was born in 1951.

She and Paul helped establish Little Flower Church at its current location on Federal Highway, just a few blocks from Young Circle in the center of Hollywood. She worshiped there each Sunday and often during the week. 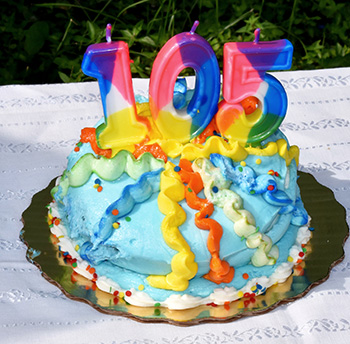 Over the decades, Waite helped in several ways at Little Flower. She did the church's books in the early years and volunteered at the parish school. She was especially active as one of the earliest members of the church’s women's club, at one point serving as president. The club held bake sales, conducted evangelization projects and provided food for the hungry.

She reminisced about life in South Florida, shopping in Miami — calling it "Miamuh," Old Florida style — and trading visits with friends there.

"Oh my gosh, I used to shop in Miami every week," she said. "But now, I don’t even know what the beach looks like."

But she drove and walked unassisted until five years ago, when she had a sunstroke while walking to a grocery store. She now has a caregiver who stays with her. Some Little Flower parishioners, including Pazer and Luis Palomino, also look to her needs.

"I've known her all my life," said Victor De Bianchi, 63, her legal guardian, an extraordinary minister of holy Communion. He also sometimes brings her the Eucharist.

Among her pastimes are tending orchids, avocados and mangoes. She cooks a range of foods including sausages and pancakes. She also enjoys reading the Sun Sentinel newspaper.

For a typical centenarian question — "To what do you attribute your long life?" — she had no answer beyond simple, healthy living. She doesn't smoke or drink, although on special occasions, she may have a half-glass of champagne. Most days, her favorite beverage is a simple root beer.

Pazer placed an apt capper on Waite's milestone event as he passed out what he called "party favors." They were blue plastic wristbands with a quote from St. Padre Pio: "Pray, Hope and Don’t Worry." 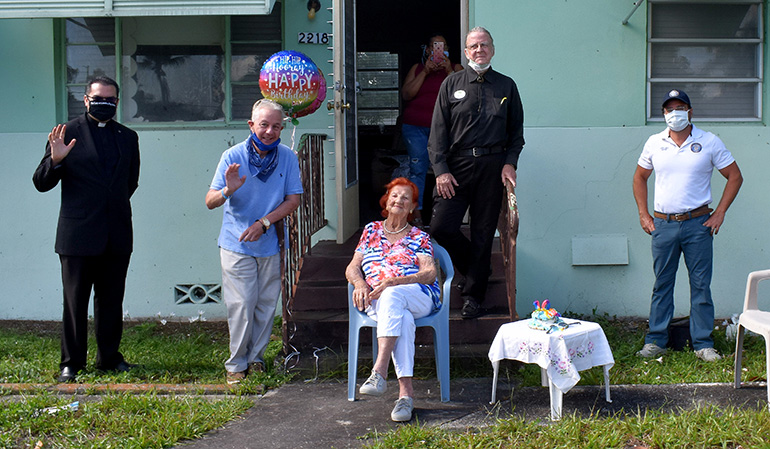 Well-wishers wave during Stella Waite's 105th birthday party in Hollywood. At left is Father Javier Barreto of Little Flower Church, where she has been a member since the 1940s. Second from right is Peter Pazer, a lay minister at the church.