MIAMI | Following are brief biographies of the Women of Faith award recipients for 2015: 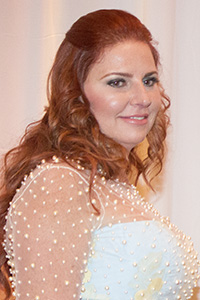 Originally from Venezuela, Simosa was married during her first semester in college and raised a family with three children. She always knew she had been very blessed, and that with those blessings, she needed to help others. Many years ago, she began volunteering and organizing different events and fundraisers to assist those in need. This led her to become a trustee at Fundacion CASAMIGA, a foundation that provided more than 600 academic scholarships and developed sport teams for youths.

In 2009, because of the aggravating situation in Venezuela, Simosa uprooted her family and moved to the United States. Soon thereafter, she suffered the devastating loss of her second child, Armandito. Although overcome with grief, as a woman truly anchored to her faith, she not only continued her volunteer work but also refocused her charitable involvements and support in honor of her son’s life.

Today, Simosa is very active in her parish, St. Francis de Sales on Miami Beach. She is also a generous donor to St. Vincent de Paul Regional Seminary, where her family recently made one of the largest cash gifts ever received. 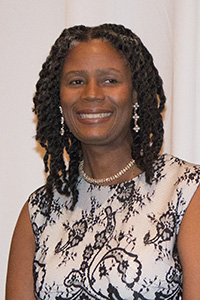 Myriam Mezadieu, St. Francis of Assisi medallion for exemplifying the virtue of compassion.

Mézadieu’s faith has always led her to help those in need, especially those who are not able to represent themselves. She began her career with Catholic Legal Immigration Network Service in March 1992 in Miami. She currently serves as the chief operating officer of Catholic Legal Services for the archdiocese, having served in this role since the agency’s inception. She and her seasoned team of immigration professionals are committed to serving the underprivileged immigrant community of South Florida, as well as religious workers from all over the world.

She also serves as general directress of The Most Sacred Heart Foundation, where she spearheads the project’s main goal: identifying major teen pregnancy related issues, preparing assessment plans with short and long term goals, and assisting with the post-natal needs of clients served.

Mézadieu holds a bachelor’s degree in business law with a minor in communications and management, and a master’s degree in international affairs. She is also a fully-accredited Board of Immigration Appeals Representative. She actively volunteers for several Catholic parishes in Haiti as well as parishes and community centers in the United States. 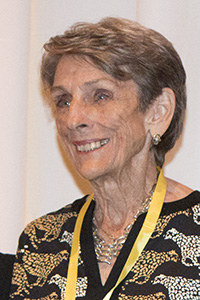 Yardley is a lifelong resident of South Florida. A graduate of the University of Florida, she practiced pharmacy in hospital and retail settings prior to serving as president of Marsupium, Inc., a manufacturer of soft goods for children, for almost 20 years.

For nearly three decades, Yardley has dedicated her time and talent to serving the needs of the Catholic and philanthropic community. She has served as a trustee on the Board of Catholic Charities in the Archdiocese of Miami, Inc. and as the chair and director of Volunteer Broward. She also has served on the boards of the University of Florida New World School of the Arts, the Concert Association of Florida and the Junior League of Fort Lauderdale, and has volunteered for a variety of South Florida organizations. She played an instrumental role in developing and funding the Museum of Discovery and Science in Broward County.

Yardley is also a proud mother of three and grandmother of six. She and her husband, Herbert Yardley, are parishioners at Assumption Church in Lauderdale-By-The-Sea. 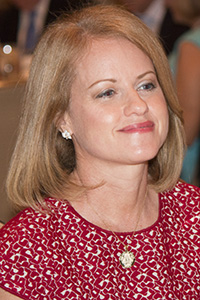 Maria Arazoza, Our Lady of Grace medallion for exemplifying the virtue of grace.

Born and raised a faithful Catholic in Miami with active parents supporting the Archdiocese of Miami, Arazoza and her sisters were taught by her father, Pepe Figarola, the importance of community service. His example and dedication to the Catholic Church and the local community inspired her service through the years.

Her strong family values carry over into her professional life. She is a senior vice president-Wealth Management and senior international financial advisor for Merrill Lynch Global Wealth Management. She has served as a local media spokesperson and has published numerous publications on financial planning. Since she joined her father at the firm in 1987, she continues a family legacy at Merrill Lynch. Recently, her eldest daughter has joined the firm making it three generations strong.

Married to Carlos Arazoza and mother of two daughters, the Arazozas are members of Epiphany Parish in Miami. She currently serves as vice chair of the board for the Catholic Community Foundation, serves on the Archdiocese of Miami Investment Committee, the Epiphany Endowment Trust, and the Board of the Centro Mater Foundation. 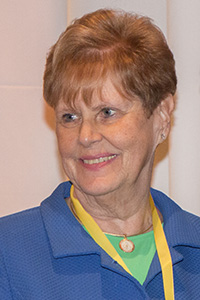 Born in Cleveland, Ohio, Lacher received a full Catholic education, kindergarten through college, thanks to the love and support of her parents. In 1969, she married Joe Lacher and followed him while his career took them up and down the east coast of Florida for many years. Early on, they divided the work â Joe had a very demanding career and she had a very demanding life as a mother of a growing family.

In 1990, the family settled in Miami. Lacher joined the Marian Center Auxiliary Board in 1991 and served there for 12 years, spending countless hours helping the Sisters of St. Joseph Benedict Cottolengo with whatever they needed.

She also served on the St. Thomas University President’s Board of Advisors from 2005 to 2013. Along with her husband, she has supported a number of nonprofits in the South Florida community, including Goodwill.

Lacher is the first to volunteer to help those in need, and has spent many years of her life serving others. She has been blessed with three sons and four grandchildren. 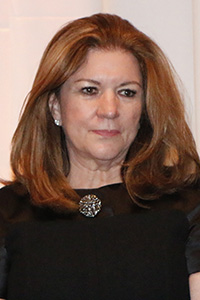 Argiz was born in Havana, Cuba and immigrated to the United States in the summer of 1962, settling in Miami. As an educator, she is deeply passionate about issues dealing with children's education.

In her words, service is a family value. She spends a lot of her time volunteering and working with charities such as United Way of Miami-Dade County, the Archdiocese of Miami, Carrollton School of the Sacred Heart, Belen Jesuit, Casita de Malta, Friends of Zanmi Beni, Fundacion Jardin del Cajas, and more.

Argiz truly loves to help others, especially those who need it the most. By her actions, she demonstrates that service to others is one of the most important things one can learn and the way to become closer to God.

She and her husband, Tony, have been married for 40 years. Together they have three children, and recently, their first grandchild. 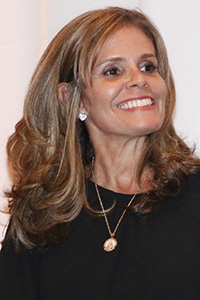 A member of both St. Augustine and Little Flower parishes in Coral Gables, Sanchez has been an active member of the Catholic community for many years.

She attended Barry University and received her degree in sociology and psychology. Seeking to use her gifts and talents to help those in need, she joined the Big Brother, Big Sister organization, where she worked for more than 12 years.

She has been married to Robert Sanchez for 23 years and they have three sons. She has always been active not only in the Church but as a volunteer mom at the schools her sons attended: St. Theresa School in Coral Gables and Christopher Columbus High School in Miami.

Grateful for having been able to be a stay-at-home mom for many years, she recently returned to Big Brother, Big Sister to continue her work as a social worker, helping those in need face-to-face, one-by-one. 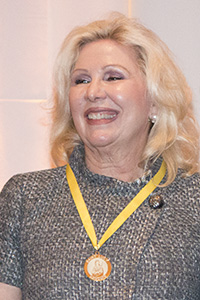 Leaving Cuba as a child, Martinez learned from her family what it was to start life as an exile in a new country. Attending Catholic boarding school with daily Mass strengthened her faith and began her deep appreciation for education.

As a young wife and mother, she began serving at the Mother Teresa Missionaries of Charity shelter in Overtown and was fortunate to meet the future saint when she visited the shelter in 1986.

That same year, during a vacation in the Dominican Republic with her husband and daughter, Martinez met a taxi driver whose two sons suffered from a rare skin disease. She secured visas for the boys to come to Miami for treatment, and this led to the establishment of the International Kids Fund (IKF), a mission of Jackson Health Foundation that provides lifesaving and life-changing treatment for sick children who do not have resources or access to physicians in their countries.

Martinez chairs IKF and is a member of the Board of Jackson Health Foundation. She also serves on the Board of Trustees of Carrollton School of the Sacred Heart, where her two granddaughters attend and are sixth generation Sacred Heart students. She has been an active parishioner at St. Hugh’s Church in Coconut Grove for over 40 years. 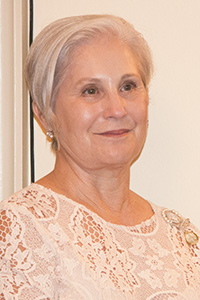 After attending a St. Louis' Emmaus retreat in 1980, Gazitua was inspired her to become a member of a new parish, St. John Neumann. She taught art at St. John Neumann School on and off for nine years, generously donating her salary to provide need-based tuition assistance at the school.

She has served as president of the parish’s women's guild, member of the South Dade Deanery and a member of the PTA board and the parish board. Being in charge of the liturgical art committee at St. John Neumann led to her involvement in the 1987 trip and Mass of Pope John Paul II to Miami.

Gazitua has chaired the Art and Culture Committee for the President's Council of FIU, and presently chairs the Art and Culture Committee for the Chilean/ US Chamber of Commerce. She also is a member of the Frost Art Museum Advisory Board. As an educator, Gazitua has used her knowledge and love of art to spread the good news of Jesus Christ, helping to bring others closer to their faith. 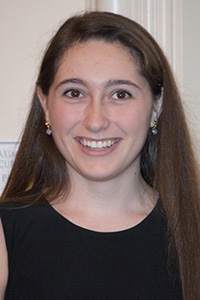 From a young age, Eve’s parents instilled in her the love of God and Church and a desire to serve. Her Catholic education has guided her to understand the importance of doing the Lord’s work. She is not only a remarkable honor student with many academic accolades including multiple honor societies and debate awards, but she is a gifted artist.

Knowing that all her gifts come from the Lord, Eve has used her art to help others. Her organization, “Art by Eve,” has assisted a long list of charities including Debbie’s Dream Can’t Stomach Cancer, Women in Distress, Cystic Fibrosis Gold Coast Guild, Food for the Poor, ARC Broward, and many others.

She also established Share the Gifts, a student-run organization that helps bring music and art to the elderly, disabled, sick, or disadvantaged in the local community. Once a month, members put on a concert and art show at a venue such as a nursing home or day program.

Eve’s projects have raised more than $65,000 for charities locally. She is a senior at St. Thomas Aquinas High School and an active member of St. Gregory the Great Parish in Plantation.

Lisa Pinto - 11/14/2015 12:52 PM
Thank you, Women of Faith, for your beautiful witness and for being the hands, feet -- and Heart! -- of Jesus! Your lives are inspiring. May the Lord bless you as you continue your journey with Him, blessing those you serve in your respective vocations.