During graduation ceremonies May 14 for 200 from law school, over 400 from main school 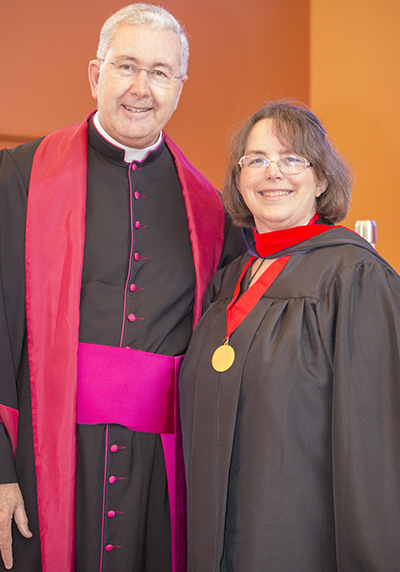 Msgr. Terence Hogan, dean of St. Thomas University's School of Theology and Ministry, poses with Minette Sternke, who received a master in pastoral ministries with specialization in deaf ministry. Sternke lost her hearing at the age of 14 but obtained bachelor's and master's degrees in accounting and banking and has worked for the FDIC for 27 years. She also is a devout Catholic who has served her parish as deaf minister coordinator since 1999. In 2015, she became a consecrated virgin.

MIAMI GARDENS | The Honorable Marcia Cooke, a U.S. district judge; Father John T. Butler, a proud St. Thomas University alumnus and a leader in Catholic education; and Emilio Cueto, a Santo Tomas de Villanueva alumnus known for his preservation of all things Cuban, were honored at STU’s commencement ceremonies May 14.

Cooke and Butler were also the commencement speakers for the law and main university commencement, respectively.

Cooke addressed the law school’s more than 200 graduates during the school’s 9 a.m. commencement ceremony. Cooke, a native of Detroit, is an experienced trial attorney and lawyer who has held a variety of positions in the public sector. In addition to her responsibilities as a U.S. district judge, she is an adjunct professor at STU’s law school. During the ceremony she was honored with the honorary degree of Doctor of Laws.

Butler, better known as Father Jack, is vice president for university mission and ministry at Boston College, and an STU alumnus. Prior to working in higher education, Father Jack was counseling and spiritually guiding violent offenders and those dealing with addiction in correctional facilities. Father Jack addressed 425 graduates during the main university commencement ceremony at 2 p.m. He was presented with an honorary doctoral degree in Humane Letters.

Cueto, who is an alumnus of Santo Tomas de Villanueva â STU’s original site in Havana, Cuba â  also received an honorary doctoral degree in Humane Letters during the main university commencement. Cueto, whose extensive collection of Cuban memorabilia can be found in his adjoining two-apartment home turned museum in D.C., has been written about extensively in publications such as the Washington Post.

STU is committed to graduating leaders for life. The following are examples of some of the leaders who graduated this weekend.

Graduation celebrations kicked off with STU’s Baccalaureate Mass May 13 at 7 p.m. in the Chapel of Saint Anthony. For those who could not attend, the ceremonies were streamed live here.

Monday, 3 Aug 2020
The coronavirus: A bioethicist explains how it works