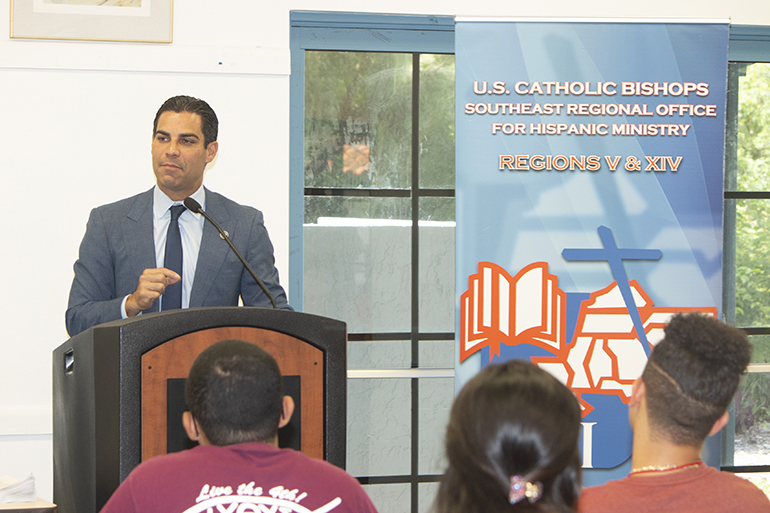 MIAMI | At 18, Julio Soriano has lived his life in a Catholic cocoon.

He has been an altar server at Sts. Peter and Paul Church in Miami for more than a decade. He graduated from its elementary school and, this past May, from Immaculata-La Salle High School, where he led retreats for his peers.

But as he heads to classes at Miami-Dade College, he wants to make sure he continues to “make the time for God.” He wants to balance his life as a student with his faith, his involvement in the parish, and the eventual demands of his career. He knows he’ll face some difficulties. 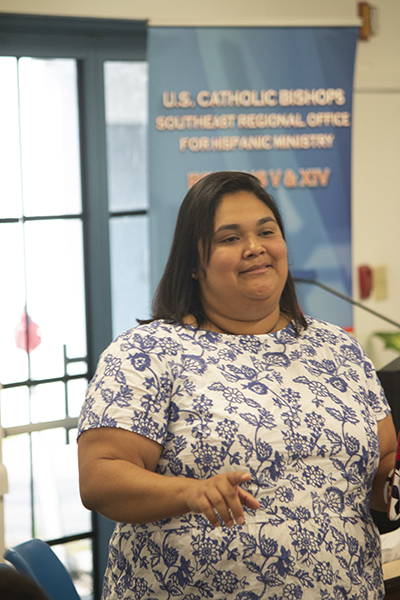 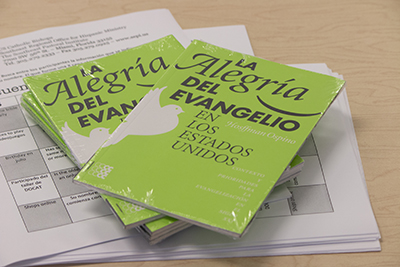 Theologian Hosffman Ospino's "The Joy of the Gospel in the United States" was one of the books given out to participants at the Young Latino Summer Leadership Institute, held July 20-26 at SEPI (Southeast Pastoral Institute).

Talking about God, he said, “is an automatic turn-off for most of my friends. I talk about the blessings that he gives us without using his name.”

Father Rafael Capó, who frequently celebrates Mass at Sts. Peter and Paul, recognized Soriano’s leadership potential. So he invited him to a new program — the Young Latino Summer Leadership Institute — offered by the Southeast Regional Office for Hispanic Ministry, which Father Capó directs.

Soriano was one of about 50 young adults, all university students, who spent July 20-26 at the regional office’s Miami headquarters, better known as SEPI. The young adults were all like Soriano, fluent in English and Spanish, comfortable in both cultures and active in the Church.

The goal is to help these young people hang on to their faith as they move into the adult world, and to prepare them to be evangelizers among their peers, especially the so-called “nones.”

The Pew Research Center defines “nones” as “atheists or agnostics, or that their religion is ‘nothing in particular’.” The label, according to Pew, applies to 35 percent of millennials, those born between 1981 and 1996. By comparison, about 16 percent of millennials self-identify as Catholic.

“They can, by their proximity as young people, go invite and pull in those who are unaffiliated, the ‘nones’,” Father Capó said. “They can make a difference on university campuses.”

Chosen and sponsored by their parishes or dioceses, the young people represented Miami and 29 other dioceses in the nine southeastern states served by SEPI. Those states — Florida, Georgia, Alabama, South Carolina, North Carolina, Kentucky, Louisiana, Mississippi and Tennessee — have a population of more than seven million Hispanics, most of them young people, Father Capó said.

A grant from Our Sunday Visitor Institute helped pay for the program, which responds to needs identified at the V National Encuentro for Hispanic Ministry and the worldwide Synod on Young People.

After starting with a retreat, participants heard talks on Church leadership, discerning a vocation, the presence of Hispanic Catholics in the U.S., life ethics, finances, theology of the body, Church leadership and dealing with different cultures.

They also got advice from representatives of various professions on “how to live as Hispanic Catholics in the professional world,” Father Capó said. 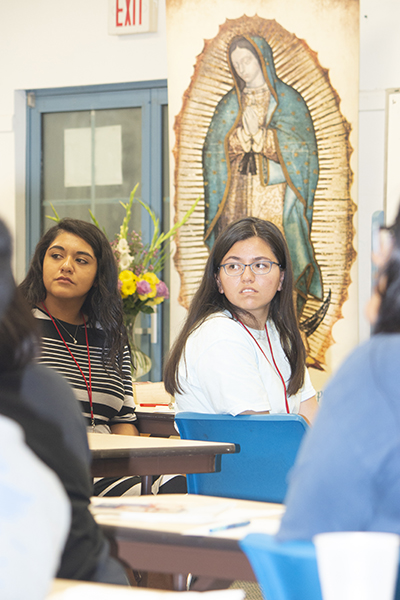 Young adults listen as one of their peers asks a question of one of the speakers at the Young Latino Summer Leadership Institute, held July 20-26 at SEPI (Southeast Pastoral Institute).

One of the speakers focused on social media. A young adult herself, Maria Alejandra Rivas works as digital media specialist in the Archdiocese of Miami’s communications office. She urged her peers to be “influencers for Christ” on the social media platforms. “Each one of you is a communicator,” Rivas said.

She based her talk on Pope Francis’ January 2019 message for the World Day of Social Communications. It notes both the positive and negative impact of social networks, in that they create communities but at the same time can create “social hermits.”

And those web-based communities sometimes divide people more than they bind, creating echo chambers for those with similar views or enabling the posting of comments few would say face-to-face.

Rivas reminded the young adults that their social media posts should aim less to convince and more to inform.

Miami Mayor Francis Suarez also spoke to the group, offering this as his first piece of advice: “Make friends with a priest.”

Suarez, a parishioner at Little Flower in Coral Gables and the father of two young children, said he strives for balance in his busy life: making time for God, for family, for work and for his own physical health. In his case, he likes to work out at the gym.

He stressed that a spiritual life is necessary and told the young people to “embrace the grind” of faith. That means going to Mass every Sunday regardless of where they find themselves, using the many spiritual and practical resources offered by the Church, and focusing every day on what Pope Francis has stressed, “How are we treating our neighbors?”

Faith “is just like exercise,” Suarez said. “You have to work yourself spiritually.”

The week-long institute won’t mark the end of the young adults’ formation. Father Capó said each participant will get mentoring throughout the coming year, either from a priest or lay professional, to help them grow in their faith. The young people also will be invited back to SEPI next summer for a week-long follow-up. 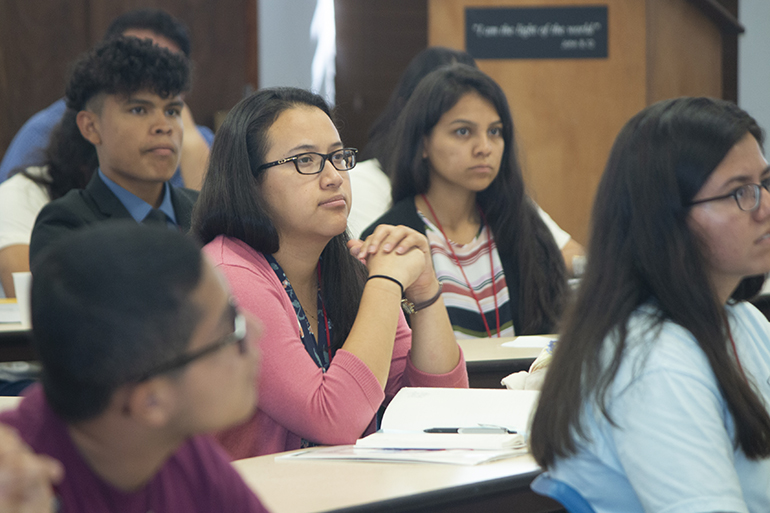