Needed: Christianity with a backbone 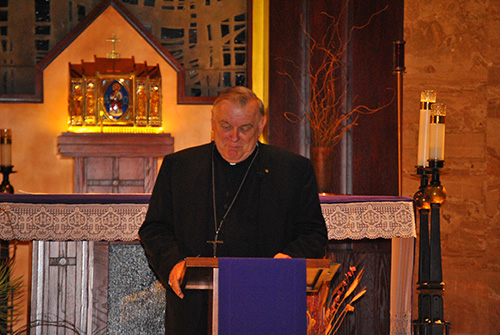 Archbishop Thomas Wenski leads a Lenten evening of reflection for about 60 leaders of youth and young adult groups from throughout the Archdiocese of Miami. The reflection took place in St. Martha Church, next door to the archdiocesan Pastoral Center.

MIAMI | About 60 leaders of youth and young adult groups from throughout the archdiocese gathered at the Pastoral Center Feb. 24 for a very special Lenten evening of reflection led by Archbishop Thomas Wenski.

In his talk, the archbishop brought up some of the challenges in ministering to younger generations. He noted that, in the past, there was a “culture of Christianity” in which Christian faith saturated the daily lives of Americans.

This environment of faith has now been eroded by a radical secularism that seeks to undermine and ridicule religion â and in particular the Catholic faith, the archbishop said.

Pastors and Catholic laity also began to tolerate defective religious practice, he said. Two generations of poorly catechized Catholics have led to a lack of Catholic young people in churches.

This religious illiteracy, he said, is a problem that needs to be addressed. While many youth programs in the past focused solely on entertaining young people with fun, social activities, he called for a change in pastoral approach: to foster mature faith and invite youths to make valiant personal choices.

“Young people don’t want an easy Christianity,” he said. “They don’t want a watered down faith.”

What our Church needs, he said, is Christianity with a backbone.

“This is a daunting task,” he said, referring to creating an environment that fosters growth and spiritual maturity. But young people need to be prepared to swim against the tides of secularism.

“There is no magic formula, so start with a sense of humility to allow God to lead us,” the archbishop said. He added that the task starts by coming to one’s knees in prayer.

To begin to put his call into action, the evening ended with adoration before the Blessed Sacrament.

Members of the Pastoral Hispana Juvenil pose with Archbishop Thomas Wenski. They led the music during the adoration that followed the archbishop's reflection.