Just call them ‘Jedis for life’ 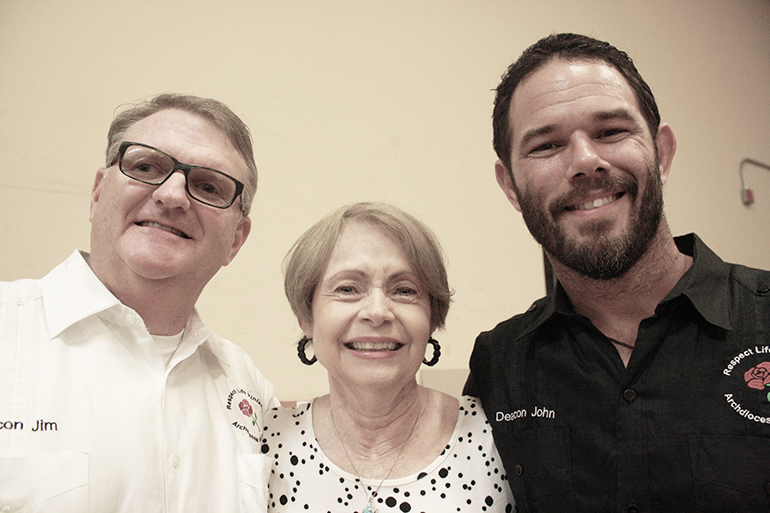 Deacon James Dugard and Deacon John Clarke seem especially suited to the task: Both are married with children which, in the eyes of some lay people, makes them more credible witnesses in the area of abortion and human sexuality.

Like priests, however, permanent deacons are ordained clergy, who can preach at Mass.

Being able to speak from the pulpit helps the ministry, said Joan Crown, archdiocesan director of respect life. “It’s difficult to bring teaching on the critical life issues of the day to the person sitting in the pew.”

Deacons Clarke and Dugard first met while studying for the permanent diaconate, and were ordained along with 11 others Dec. 6, 2014.

Both have a passion for pro-life work. Deacon Dugard has been chaperoning high school groups to the March for Life in Washington, D.C., since 1993. In 2011, he invited Deacon Clarke to take part, an experience he said gave him the impetus to speak publicly about his own pro-life convictions. 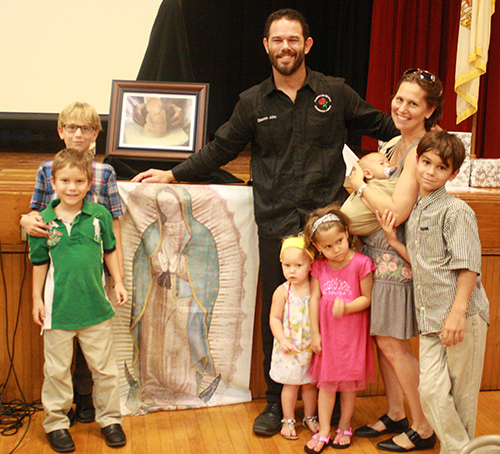 Deacon John Clarke and wife, Dawn, pose in front of an image of Our Lady of Guadalupe with their children, from left: Maximus Florian, 7, Levi Angelo, 5, Willow Maria, 1, Sadie Helena, 3, Jedidiah Paul, 10 weeks, and Elvis Patrick, 9. The Clarkes practice Natural Family Planning and were married 11 years before starting their family. “We had a couple of beautiful surprisesÃ¢â¬Â¦ We always said we wanted five,” said Deacon Clarke. Sadie was named in honor of his first date with his wife, who asked him to the Sadie Hawkins dance. They dated all four years of high school.

“People need to hear the craziness that goes with having big families,” said Deacon Clarke, a 38-year-old former police officer with six children between the ages of 9 years and 3 months. “It’s unreal if you try to paint it as fairy tale.”

He and his wife, Dawn, firefighter/paramedic with the City of Hollywood Fire Rescue, give talks at marriage retreats once a year.

Deacon Clarke’s competitive spirit began with wrestling in high school and led to a professional fighting career on the Strike Force (later bought by the UFC), fighting on the same card as UFC notables Ricky Diaz and Robbie Lawler.

After finishing his first semester in the deaconate program, he left a 10-year career as a police officer, where he spent the last four as a SWAT team member and canine officer with the City of Hollywood.

“After my son, Levi, was born I felt it was very difficult to live my faith and do my job at the same time,” he explained. “It is a civil offense to sleep in the open or panhandle, and I had a conflict of interest with performing the corporal works of mercy, which I felt were above state law.

“My wife and I had it in our minds that if I was going to be ordained, we would find an alternate way to meet our financial needs. And God has been faithful,” he said. 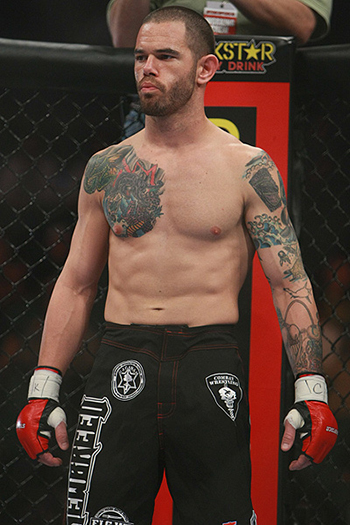 Picture of Deacon John Clarke from his days as a professional fighter with Strikeforce Miami in 2010. “I stopped fighting Professional Mixed Martial Arts when my wife, Dawn, asked me to because of the kids,” he said, adding “happy wife equals happy life.”

Deacon Clarke now owns a mixed-martial arts academy in Hollywood. He still completes in grappling (a type of wrestling) and Brazilian jiu-jitsu while teaching at his school. He also trains canine officers and owns a boat company. He plans to enter a boat he’s building in the Fort Lauderdale boat show in November.

He describes his role with the respect life ministry in terms of Star Wars’ light and dark sides.

“It’s a balance of the force â the Jedi in the temple,” he said. “When you see and feel evil like that it gives you the strength to carry out your mission on the opposite side. When you see death in every sense of the word, you realize you must remember your mortality. It’s the only thing you can give people on this side. I can provide light because it comes from my experience from the dark side.”

One of the ways Deacon Clarke is serving respect life is by emceeing the Chastity Days held each February. The event is designed to teach students how to discern the truth amid the false messages they receive about love and sex in today’s world.

“Kids can see through authenticity better than anyone else,” he said. “Coaching is the same thing, whether it is boxing or wrestling or God’s team, kids are in such need of good mentors. They see if it’s real or if it’s staged. Kids need you. They have so many different symbols that are being thrown at them. There’s just no mentors. Everybody is trying to live the American dream and they are not spending time with their families.” 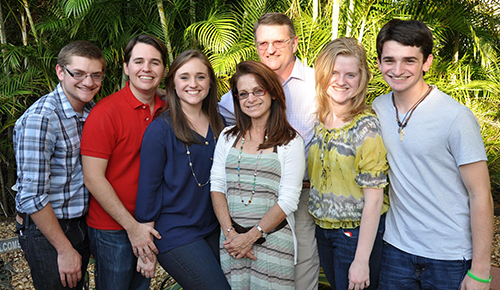 Deacon Dugard and his wife, Nelly, a teacher's assistant at St. Louis Covenant School, have been married 28 years and raised four children, ages 19 to 25. He teaches theology at Christopher Columbus High School in Miami, where he has spent the last 16 of his 26-year career at both the high school and university level. (His students call him ‘Doc’ in recognition of his doctoral degree.)

“Being a deacon, particularly a married deacon, you influence many lives,” he said. “It has opened my eyes to the enormous amount of pain in this world.”

Deacon Dugard has experienced some of that himself. When he was in his last year of formation for the diaconate, his oldest son revealed that he was gay. “I asked him if he was okay knowing that if he fell in love and got married, I would not be able to attend his wedding.” 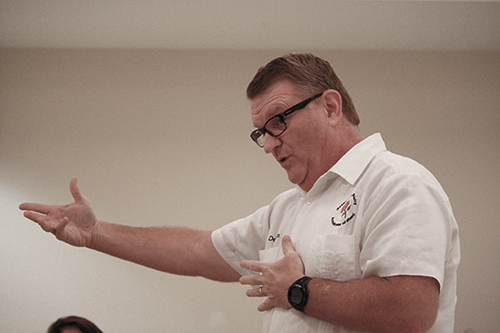 Deacon James Dugard responds to a question on the delicate topic of end-of-life issues at a monthly Women’s Prayer Muffin meeting held at St. Louis Church in Pinecrest.

That personal suffering has given Deacon Dugard some insight into dealing with the LGBTQ community in his ministry as well as his university classes.

“One student came to me and shared that his parents disowned him because he was gay,” he recalled. “I was able to talk to him about the teachings of the Catholic Church and the love of God that he was not getting from his family. It was a heartbreaking tragedy and he was comforted by the fact that he was able to talk with me.”

His initial involvement with the pro-life movement came as a result of speaking with a very good friend who had suffered the loss of a child through miscarriage. She told him she felt God was punishing her for an abortion she had had when she was younger.

He thought that wasn’t the God he knew, and later became involved in Project Rachel, a program that promotes healing among post-abortive women and men.

The two meet periodically with Crown to discuss their new role, which is still being defined. High on the priority list: Taking the pro-life message to every one of the archdiocese’s 108 parishes and missions in the next four or five years.

They also want to implement a ministry for women who have gone through miscarriages. And more recently they added a talk on the death penalty to the “life issues” workshops that the respect ministry schedules at different parishes throughout the year.

“We talk about all the issues from womb to tomb,” Deacon Dugard said.

Deacon Pierre Douyon - 10/21/2016 09:47 AM
Blessed and humbled to know both of these wonderful men of God! May the force (and His Grace) be with them as they minister to all God's children.