Sister Maria Jose Socias of the Servants of the Pierced Hearts of Jesus and Mary speaks about "Building the Family Upon the Rock." Sister Maria Jose worked in Respect Life ministry for nearly 10 years.

Jacqueline Debs, right, who works in the Respect Life Office, poses with Raiza Rodriguez, a respect life volunteer from Our Lady of Guadalupe Parish in Doral. With help of other volunteers, Debs organized the first archdiocesan respect life conference for Hispanics.

Joan Crown, director of Respect Life in the archdiocese, listens to simultaneous translation of a speaker's talk from Sister Guadalupe Hermosillo, a novice with the Servants of the Pierced Hearts of Jesus and Mary.

A participant sings along to the Hymn to the Family printed in the program.

Participants at the Hispanic Respect Life Conference sing the Hymn to the Family that was printed in their program.

The baby bottle campaign is one of the fundraisers held in parishes throughout the archdiocese, usually during October, which is Respect Life Month. The money supports the five Pregnancy Help Centers, two in Miami-Dade and three in Broward County.

Adolfo Castaneda, director of Education and Research for the Spanish-language section of Human Life International speaks about Christian marriage to conference participants.

Jacqueline Debs, who works in the Respect Life Office and served as chief organizer of the Spanish-language congress, speaks "the truth about abortion" at one of the conference sessions.

Nilda Green shares her story of healing after aborting two of her children. She now who works on the Spanish-language Vinedo de Raquel (Rachel's Vineyard) team in the Diocese of Palm Beach, and serves as regional coordinator for No Mas Silencio (Silent No More). She also is one of the two women who felt called to organize statewide prolife conferences for the Spanish-speaking.

Brother Jay Rivera, founder of the Franciscans of Life and director of Project Joseph, outreach to fathers in crisis pregnancies, speaks at the Hispanic prolife conference.

Yeshica Yanes, one of the local Catholic musicians who performed as Musicos por la Vida (Musicians for Life) performs a song she wrote from the point of view of an unborn child.

Five-year-old Mariana Mendoza dances and sings with members of Musicos por la Vida (Musicians for Life) who performed at the Congreso Hispano Respeto a la Vida (Hispanic Respect Life Congress.) Mariana is a member of Our Lady of Guadalupe Parish in Doral.

Participants at the Congreso Hispano Respeto a la Vida (Hispanic Respect Life Congress) sing along with the Musicos por la Vida (Musicians for Life) during one of the musical interludes of the day-long conference.

The parish Respect Life volunteers who helped with logistics and organization at the Congreso Hispano (Hispanic Congress) dance to the beat of Musicos por la Vida (Musicians for Life) during one of the musical interludes. From left: Gahodery Cambry of Nativity Parish in Hollywood and Reny Aguilera of Immaculate Conception Parish in Hialeah.

Some of the parish Respect Life volunteers who helped with logistics and organization at the Congreso Hispano (Hispanic Congress) dance to the beat of Musicos por la Vida (Musicians for Life) during one of the musical interludes.

Father Alfred Cioffi, director of the Bioethics Institute at St. Thomas University in Miami, speaks about the topic to conference participants.

Angelique Ruhi-Lopez, co-author of The Infertility Companion for Catholics, waits her turn to speak at the conference.

Drs. Ana M. Verdeja and Carlos Lamouthe, husband-and-wife obstetricians-gynecologists in Plant City, Florida, get ready to speak about how they discovered Natural Family Planning and turned their practice into one that complies entirely with Catholic teaching, including not prescribing the pill.

Prolife message on one of the T-shirts sold by the Respect Life Office of the archdiocese.

HIALEAH | Reny Aguilera has been a prolife volunteer since he was a 13-year-old student at St. John the Apostle School in Hialeah â and a classmate sought his help to get an abortion.

Four decades and 32 years of marriage later, the Immaculate Conception parishioner says the need for prolife education is dire, especially among Hispanics.

That’s why he was glad to spend a Saturday helping out at the first Congreso Hispano de Respeto a la Vida, an all-day conference, completely in Spanish, hosted by the Respect Life Office.

“Because all the others have been done in English, and the number one place for abortions is Hialeah,” Aguilera said, referring to statewide statistics.

The Nov. 7 event at Immaculate was the first all-Spanish Respect Life conference in the archdiocese, and the second one statewide. The first conference took place in September in the Diocese of Palm Beach.

“The majority of women who are aborting are Hispanic and black. We are in the Hispanic spot here in Catholic South Florida,” said Jacqueline Debs, administrative assistant in the archdiocesan Respect Life Office.

Debs took on the challenge of organizing the conference after the Miami office was approached by two women from the Diocese of Palm Beach â Emily Babilonia and Nilda Sepúlveda-Green.

“They just felt the Lord telling them to go all over Florida and get these things going,” explained Joan Crown, director of the archdiocesan Respect Life Ministry. 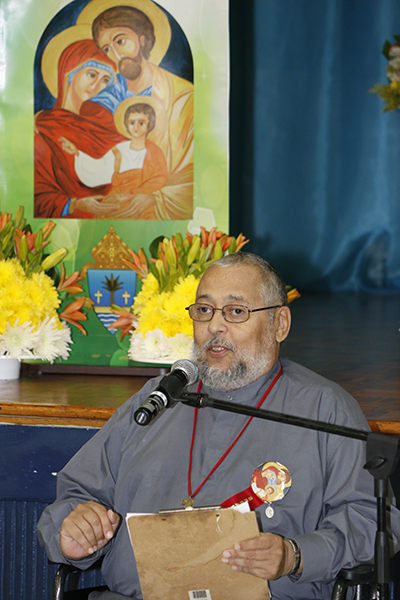 Brother Jay Rivera, founder of the Franciscans of Life and director of Project Joseph, outreach to fathers in crisis pregnancies, speaks at the Hispanic prolife conference.

“I didn’t want to do this. Not now,” said Crown, whose central office has been dealing with construction woes since moving into a new location in Hollywood earlier this year.

But St. Augustine’s Bishop Felipe Estévez â former auxiliary bishop of Miami and her immediate supervisor when he was here â told her, “You have to do this. So I was obedient to him,” Crown said.

That’s where Debs took over.

“We don’t think of ways to communicate with (Hispanics) in their language,” Crown said. “I needed people from that culture to let me know what touches the heart of the different ethnicities.”

One of the things the Hispanic conference did differently was adding musical interludes between speakers. A group of volunteer musicians, who called themselves Músicos por la Vida (Musicians for Life), led the 100 or so people in attendance in praise and worship songs, including a Hymn to the Family whose words were printed in the program.

“This is Hispanic flavor through and through. From the decorations to the music to the food that was being given,” said Debs. “To reach the people that you want to reach, you have to reach them in their roots. The objective is to reach people and change their hearts.”

That is also why the conference was billed as a conference on “La Familia a la Luz de Dios” (The Family in the Light of God).

“It was about the teachings of the Church in that area of faith and family,” Debs said. “Everybody hears the Church saying ‘no’. This is where the Church explains its ‘yes.’ God has a better option and we don’t know it.”

Debs described abortion as “the biggest consequence” of not hearing and understanding God’s plan for the family. “It’s legal and it’s happening, and there are many people sitting in the pews that have gone through that.”

One of them, in fact, is Sepúlveda-Green, who had not one but two abortions despite being raised Catholic and educated in Catholic schools. She had married young and already had two daughters. Her husband was addicted to drugs. She sought solace in promiscuity.

She described spending 30 years “in torment â¦ Where do I find forgiveness if I’m already going to hell?” When she heard prolife speakers in church, she said, “I would run away.”

She found healing in a Viñedo de Raquel retreat â the Spanish version of Rachel’s Vineyard, a retreat for women (and men) who have aborted.

“I am a witness â listen well â to the mercy of God,” she said. “Despite all my sins, God has me standing here today.”

Sepúlveda-Green is now a member of the Viñeda de Raquel retreat team in the Diocese of Palm Beach and regional coordinator of the No Más Silencio (Silent No More) movement for women who regret their abortions.

She warned her listeners, however: “Be very careful with the words you use. Because you could heal a person or definitively send them to hell. Don’t judge. Be compassionate.”

Another speaker was Brother Jay Rivera of the Franciscans of Life, founder of Project Joseph, a ministry to the husbands and boyfriends of the women who come to the archdiocesan respect life offices seeking help.

“These men, at bottom, are good. The problem is that no one has shown them how to be adults. And even less have they been taught that being a father begins at the moment of conception but doesn’t end there,” Brother Jay said.

Project Joseph consists of three, six-week-long series of classes focusing on what it means to be a father, fetal development, and wise use of time and money, as well as communication skills.

More than 200 fathers have passed through Project Joseph, Brother Jay said. “They start out as adolescents and end up as mature men.”

“Two or three patients left our practice but they are beginning to return,” said Dr. Verdeja. “Now we practice gynecology that is very healthy, that cooperates with the (woman’s) body.”

Debs is already thinking about next year’s conference.

“We’re going to write all the other ministries to bring their people,” she said, citing groups such as Emmaus retreats.

“These are the stories they are hearing,” Debs noted. “We want to give them the tools to deal with people.” 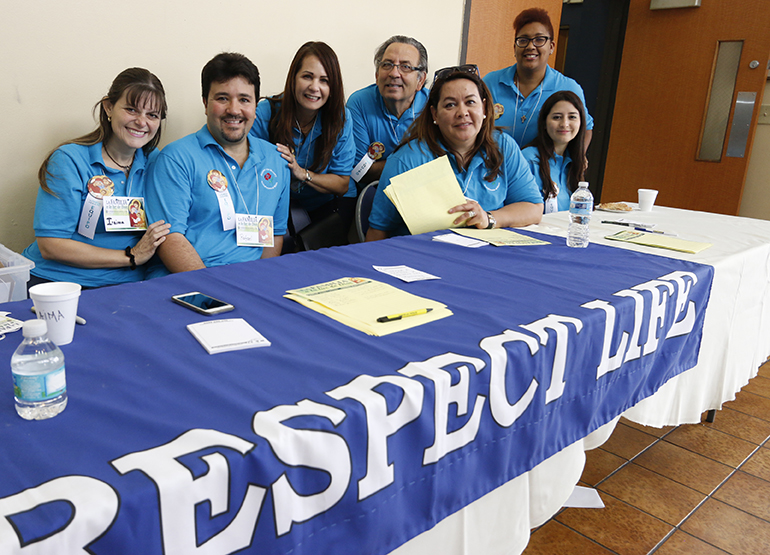 Hispanic Respect Life volunteers from parishes throughout the archdiocese welcome attendees to the Congreso Hispano Respeto a la Vida at Immaculate Conception Church in Hialeah Nov. 7.