A call for BOLD Justice 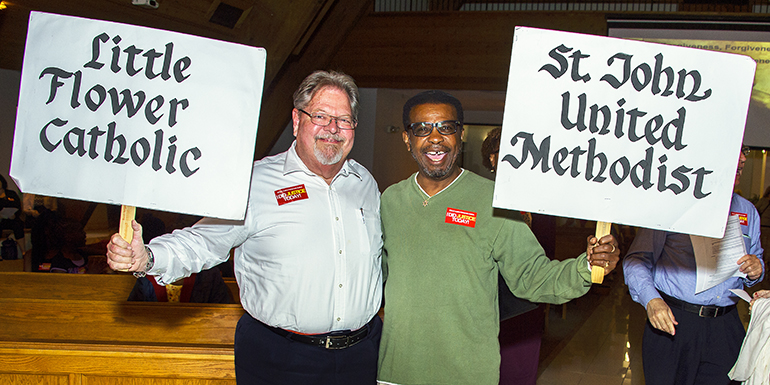 DAVIE | Two surprises leapt out at those attending a recent rally of the social action coalition known as BOLD Justice.

First surprise was a line of 10 signs held by children â bearing messages like "401 Trespassing," "188 Loitering" and "442 Alcohol" â for the numbers and types of offenses for which Florida children have been arrested over a one-year period.

Second surprise was when the 1,330 attendees were told to stand if they themselves had ever done one of those offenses â bringing three-quarters to their feet, laughing nervously.

"Twelve thousand children made simple mistakes and were eligible for civil citations, and they weren’t given the chance," said the speaker, the Rev. Andrea Byer of Village United Methodist Church in North Lauderdale. "Now they're marked for life ... We refuse to give up on our children's future." 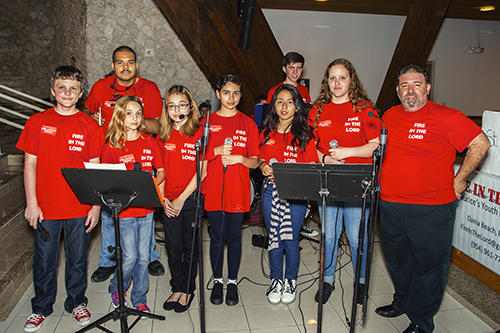 “Fire in the Lord” youth chorus from St. Maurice at Resurrection Church in Dania Beach opens the Nehemiah Action with a song. 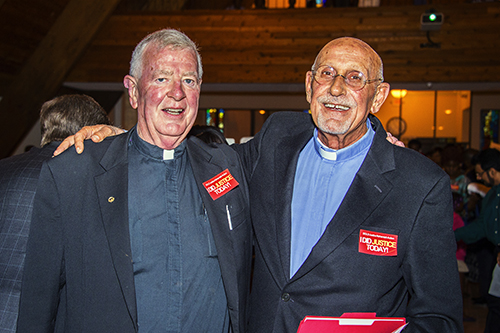 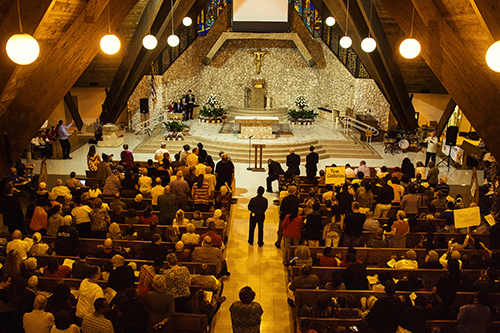 View of the assembly gathered at St. David Church in Davie. 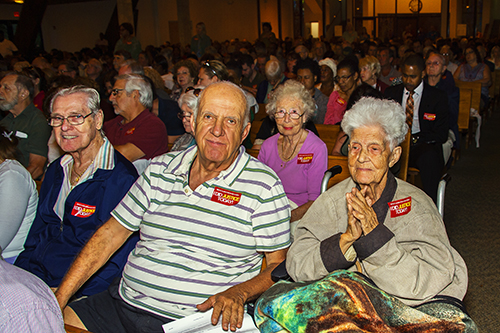 A view of some of the participants at the Nehemiah Assembly. 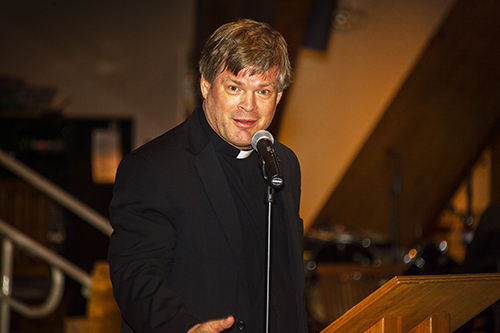 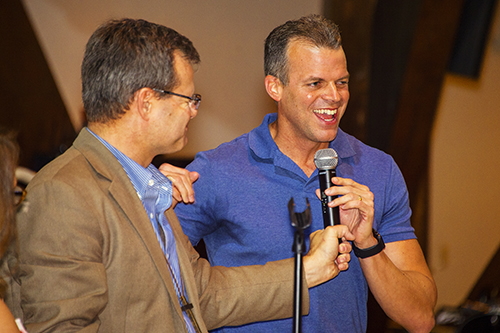 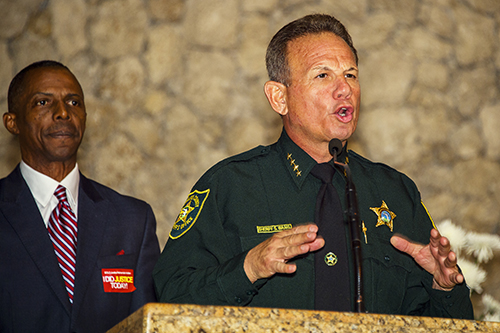 Such was the blend of promise and indignation that drove the April 11 rally at St. David Church, organized by Broward Organized Leaders Doing Justice. Called a Nehemiah Action, for the prophet who rebuilt the walls of ancient Jerusalem, the BOLD Justice event brought members of 22 churches representing 20,000 people in Broward County.

The gathering resembled a political convention, with groups holding signs for their churches. Among them were Baptist, Lutheran, Presbyterian, United Methodist, Presbyterian and Seventh-day Adventist congregations.

"One of the greatest things about this is just getting together with fellow ministers," said Father Thomas O’Dwyer of Little Flower of Hollywood, who helped to found BOLD Justice in 2007.

After music by Fire in the Lord, the youth ensemble of St. Maurice, their pastor, Father Roger Holoubek, opened the meeting with a rousing speech.

"People of God â are you ready to rise up for Broward County tonight? When congregations come together, we can make a difference â¦ We stand for Bold â" then he paused as the crowd shouted back, "Justice!"

The April 11 rally often resembled a Pentecostal-style service, with leaders ending their reports with call-and-response slogans. They often shouted "BOLD!" with the crowd shouting back, "Justice!"

As with People Acting for Community Together (PACT) in Miami-Dade, and similar groups in several states, BOLD Justice teams compiled research and presented the findings at the rally. The members then pressed for commitments from public leaders, who were invited to attend as well.

Juvenile arrests were one of three main topics at the rally. The others were assisted living for the elderly in Broward, which the researchers said has the second-highest number of life-threatening deficiencies in the state; and caring for the mentally ill in Florida, which is said to be last in the nation for spending on mental illness.

Pastor Bennie Moultry of New Jerusalem Baptist Church in Hollywood spelled out some dire stats on seniors, which were also in a 10-page document handed out as people entered the church. He said one of every four beds in Broward nursing homes were on Florida's "watch list," showing they had failed health inspections. He added that Florida's senior population is projected to double â to 9.7 million â by 2030.

"This problem isn’t going anywhere," Moultry said. "We will not accept this because seniors count â" then he awaited the crowd to reply: "â and seniors can count on us!"

As a solution, the team showed a video of the Green House Project in Loveland, Colo. The 60-bed facility, which opened in 2014, looks and operates more like a home than an institution; and half of the $16 million cost came from grants.

"We want the Broward County Housing Authority to build a Green House," said Pastor Keith Spencer of Trinity Lutheran Church in Pembroke Pines. "It's the only model that promotes dignity, not a warehouse."

County Mayor Marty Kiar, attending the rally, promised to help push for a Green House. He said the research team showed him the Loveland video two months ago.

"This is an easy cause to get behind," Kiar said. "I'm thankful for BOLD Justice."

Another chance for youths

Civil citations were perhaps the most contentious issue on the agenda. According to the researchers, Florida arrests a higher percentage of youths than Texas or California. And they're often arrested for minor, non-violent offenses like drinking or stealing candy. Their criminal records then cripple their chances for jobs, scholarships or military service.

Under Florida Statue 985, they can instead be issued up to three civil citations, steering them into diversion programs including community service and restitution to victims. However, the law only recommends such citations, rather than mandating them. As a result, enforcement varies greatly by police department, BOLD Justice leaders said.

Israel's own office now gets 81 percent of all eligible youths into the program, and the City of Hollywood reached 100 percent in December, the BOLD Justice fact sheet said. But other cities and counties resist changing the status quo.

A bill this year would have amended the state law to require civil citations for eligible youths, but it died in committee. At the Nehemiah meeting, Sheriff Scott Israel pledged to accompany BOLD Justice to Tallahassee during the 2017 legislative session to help argue for the change.

The third concern, mental illness, was also cast as a policing issue. BOLD Justice researchers said that in Broward County, one-third of those in jail suffer from mental illness. Worse, inmates in Broward since 2003 have declined by 12 percent, but the number of those with mental illness has nearly doubled.

The researchers recommended Crisis Intervention Team training, a 40-hour course that equips police to deal with people who suffer from mental issues, including the option of sending them to mental services. In Miami, the method has resulted in a drastic drop in fatal shootings of the mentally ill â from one per month to less than one per year, according to the fact sheet.

After the closing prayer, some of the conferees pronounced the meeting a success.

"It was excellent," said Maria Finzi of Village United Methodist Church, North Lauderdale. "Many problems were presented, but they also put forth solutions."

Janice Valvano, a member of St. David, agreed. "Very well done. Every speaker was very knowledgeable. We have a common bond because of our faith in Jesus Christ."

A group of children hold up signs for the numbers and types of offenses for which Florida children have been arrested over a one-year period.