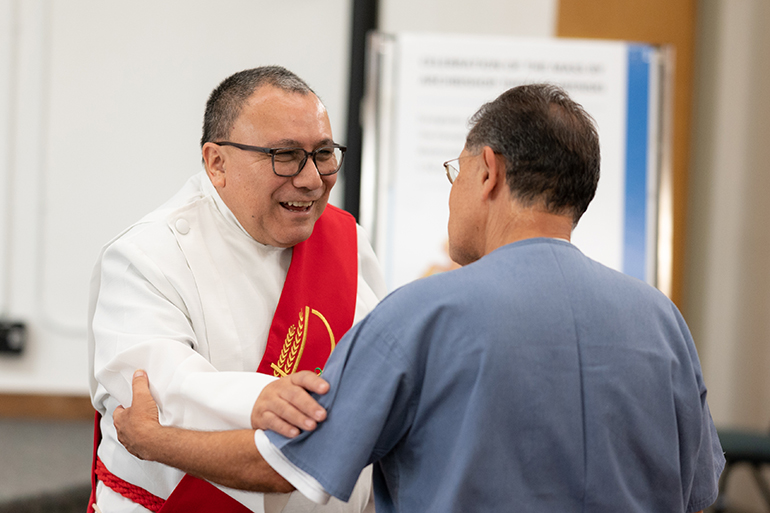 Deacon Edgardo Farias, director of Detention Ministry in the Archdiocese of Miami, speaks with an inmate during Archbishop Thomas Wenski's pastoral visit June 8, 2022 to Everglades Correctional Institution in the western edge of Miami-Dade County. The facility runs an incentivized pilot program to cultivate an environment of learning and rehabilitation in order to reduce violent behavior among inmates. The prison is also unique in that it has a fulltime Catholic chaplain.

MIAMI | Deacon Edgardo Farías ministers to a large but invisible population: 20,000 people in 30 facilities throughout Miami-Dade, Broward and Monroe counties.

Not all of them are Catholic. But as director of the archdiocese’s Detention or Prison Ministry, Deacon Farías sees what society doesn’t see because of its “lock ‘em up” mindset: the men, women and yes, even children, who are detained or incarcerated in county jails, state prisons, federal prisons, juvenile detention centers and immigration detention centers. 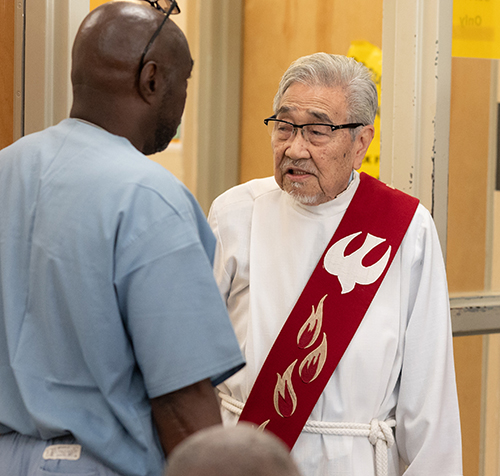 Deacon Alex Lam, fulltime chaplain at Everglades Correctional Institution, speaks with an inmate June 8, 2022, the day Archbishop Thomas Wenski made a pastoral visit to the facility in the western edge of Miami-Dade County.

He ministers not just to those who are detained, but to their family members: wives and husbands, children and parents, many of whom sit alongside us in church pews every weekend.

“We touch hearts,” he said. “This ministry touches hearts and gives hope and is healing.”

Deacon Farías needs volunteers to help him minister to this hidden flock, but he also wants society to look at these people through a different lens.

“We're talking too much about crime, but we're not talking about the people,” he said during the December taping of the archdiocesan podcasts, What the Faith, Miami? and Cuéntame Católico. “People that suffer incarceration, they are people like you, like me.”

The Detention Ministry functions with a handful of volunteer priests and deacons and 150 lay persons – down from 300 before the pandemic. The priests – including Archbishop Thomas Wenski, Auxiliary Bishop Enrique Delgado, Msgr. Michael Souckar, Father Steven O’Hala, Father Elvis Gonzalez and Father Matias Hualpa – make themselves available once or twice a year to celebrate Mass and hear confessions inside the facilities.

On Christmas day, Archbishop Wenski celebrated Mass for migrants detained at the Krome Detention Center in Miami. Bishop Delgado recently accompanied Deacon Farías to a local federal prison and fell so “in love with the experience” that he promised to continue to help the ministry once a month. 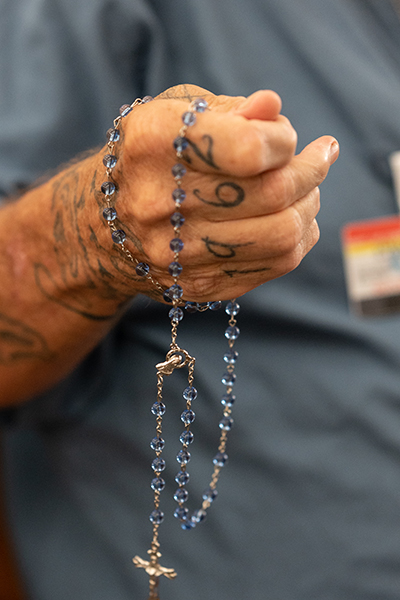 An inmate prays the rosary during Miami Archbishop Thomas Wenski's pastoral visit June 8, 2022 with inmates at Everglades Correctional Institution in the western edge of Miami-Dade County. The facility runs an incentivized pilot program to cultivate an environment of learning and rehabilitation in order to reduce violent behavior among inmates. The prison is also unique in that it has a fulltime Catholic chaplain.

Those in-person visits ceased during the last two years of pandemic but recently resumed, although with greater restrictions than before. One facility in Broward, for example, no longer permits Communion hosts to be brought in. Instead, the facility purchases them.

When priests are not available – which is most of the time – the deacons and lay volunteers lead services of the Word and distribute the Eucharist.

“The most important thing is the two sacraments, the Eucharist and the sacrament of confession,” Deacon Farías said, adding that he stresses to his volunteers: “We are going to see how God works over there. We don't go [to bring] God. We go to see God working in every facility.”

Two deacons – Alex Lam and Guillermo Dutra – work fulltime as chaplains inside local facilities. Deacon Lam has been chaplain for more than 20 years at the Everglades Correctional Institute, a state prison in western Miami-Dade County; Deacon Dutra works as chaplain at the Krome Detention Center, a facility run by Homeland Security.

By law, and as in the military, chaplains, regardless of their own faith tradition, must arrange for services that conform to the religious preference of the inmates – be they Jewish, Christian, Muslim, Buddhist, etc. The Archdiocese of Miami is offered one hour or so each week at every facility – thus the need for so many volunteers.

Deacon Farías offers a four-hour training for new volunteers every other month which focuses on the seven principles of Catholic social teaching, which he calls “a beautiful doctrine.”

Volunteers also must comply with archdiocesan requirements such as Virtus training and background checks and obtain a letter of reference from their pastor. After that, Deacon Farías presents a letter of endorsement to the facility where they wish to serve.

“They are free to choose wherever they want to help us,” he said, be it by visiting a local site or ministering to the families outside.

That is how Deacon Farías started in the ministry. In 1998, he was listening to Radio Paz as the ministry’s previous director, Sammy Díaz, spoke of his need for volunteers.

“I called him right away and he invited me to do the training,” Deacon Farías said, noting that he was attracted to the ministry by his own experience more than 30 years ago.

“I had a brother that suffered mental illness and committed a crime in Argentina,” he said. He was helping his parents find a lawyer as well as treatment for his brother, so “I was learning from the point of view of the family.”

He has served as director of the ministry since 2004 and is now the North American representative to the International Commission of Catholic Prison Pastoral Care.

The Church’s ministry to people in prison dates back centuries, Deacon Farías noted. But he sees the need to change “the pastoral paradigm” from reaching out only to the incarcerated.

“We forgot all the criminal justice system,” he said: police, corrections officers, judges, even legislators who “categorize every behavior. This is a crime. This is not a crime.”

Also needed is societal support for the family and for mental health treatment, programs, and providers.

“Prison is the mirror of our society. And we need to work on our social problems, especially focus on the family. The family right now in our culture suffers so much. They don't have the support of the society,” Deacon Farías said.

Individuals also need to change their attitude toward those who commit crimes, he stressed. 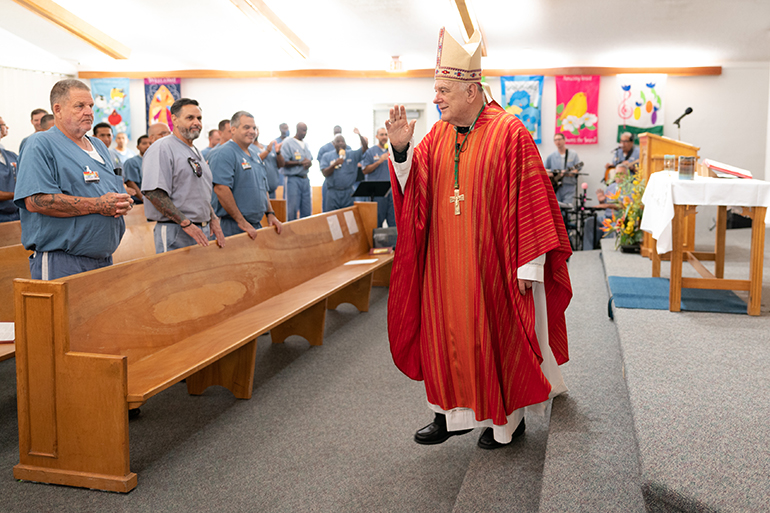 Miami Archbishop Thomas Wenski blesses inmates after celebrating Mass June 8, 2022 during a pastoral visit at Everglades Correctional Institution in the western edge of Miami-Dade County. The facility runs an incentivized pilot program to cultivate an environment of learning and rehabilitation in order to reduce violent behavior among inmates. The prison is also unique in that it has a fulltime Catholic chaplain.