Of green thumbs, recycling and robots

HOLLYWOOD | Students from Little Flower School in Hollywood have been working to make their school and community greener.

During the school’s annual Academic Showcase on May 18, 2022, they showed family and friends the STEM (acronym for Science, Technology, Engineering and Math) projects they had been working on to reach that goal. 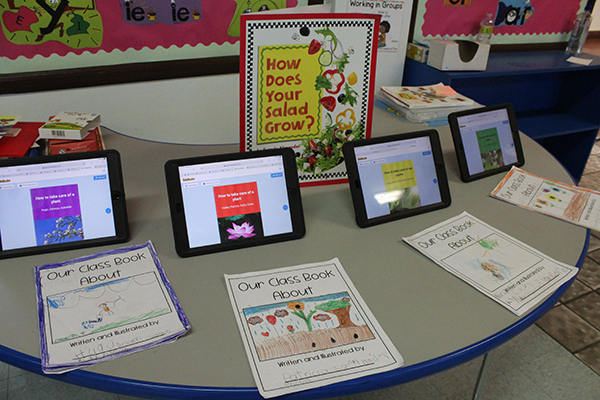 Little plants and little authors: Kindergarteners from Little Flower School in Hollywood planted several seedlings and created an e-book on the experience called "How To Take Care of a Plant." The project was part of a STEM Academic Showcase at the school shared with family and friends on May 18, 2022. 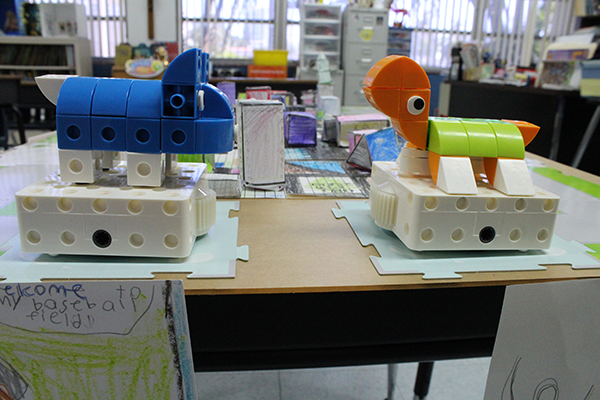 The bots about town: Second graders from Little Flower School in Hollywood made a geometric themed version of their town, and programmed robots to stroll its outer perimeter. The project was part of a STEM Academic Showcase at the school shared with family and friends on May 18, 2022. 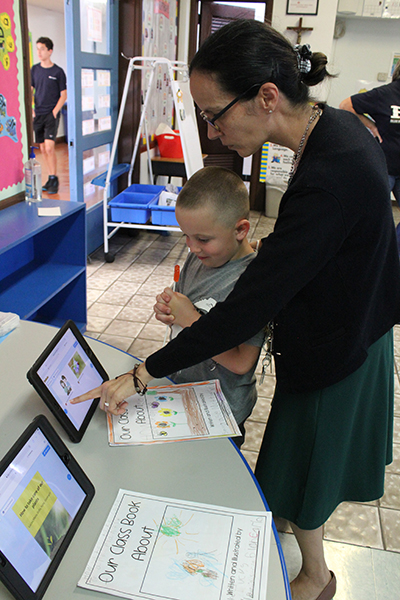 Little Flower School Principal Omayra Roy flips through the e-book "How To Take Care of a Plant" with a student during the STEM Academic Showcase at the Hollywood school on May 18, 2022. Family and friends came to look at a variety of exhibits created by students.

Little plants and little authors: Kindergarteners from Little Flower School in Hollywood planted several seedlings and created an e-book on the experience called "How To Take Care of a Plant." The project was part of a STEM Academic Showcase at the school shared with family and friends on May 18, 2022.

Terri Tresse challenged her fourth-grade students to recreate the city of Hollywood in a “greener” way. Student teams focused on eco-consciousness in areas such as transportation, alternative energy, waste management, food and water, and buildings and houses.

With some imagination, and a lot of Legos, students got to work on a city replica. It took them about 18 days to build the new city that contained homes and businesses, but also a recycling center, water treatment center, electric charging stations, solar panels on buildings, including on Little Flower Church and School, wind turbines, a community garden, and a lot more trees.

“They started small, and all of a sudden, it’s done,” said Tresse, who hopes to encourage more eco-friendliness in the school and church community.

Several other projects on display encouraged gardening and even healthy eating. In physical education class, students “ate the rainbow” of fruits and vegetables; carrots, cucumbers and broccoli were a hit, lettuce not so much.

In a first-grade classroom, students kept a journal of their observations after planting pumpkin seeds, many of which had significantly outgrown the clear plastic cups where they sprouted.

Kindergarteners in Nicole Fariello’s class exercised their green thumbs by planting seedlings of vegetables, herbs and plants. Using iPads, they even designed and wrote their own e-books, “How to Take Care of a Plant,” describing their learning journey.

“My goal is that we’re going to continue growing the plants, and hopefully watch them over the summer, so when they come back next year, they’ll see [them] full grown,” said Fariello.

Sandra Kearns and her second graders took on a more tech angle, focusing on coding, programming and robotics.

“It’s the up-and-coming thing, and the kids had been talking about it,” said Kearns, who has been teaching for 40 years, 33 of them at Little Flower.

With the aid of the school’s computer teacher and Kearns, the group decided to code robots to function in a geometry-inspired cityscape of Hollywood. Students designed and built cubed, triangular, and cylindrical buildings out of paper. In the outer perimeter of the city, two robots rolled up and down the streets.

Coding and programming the robots to stay on the paths and change directions required them to follow instructions from a manual, as well as several trials and errors. Even on the day of the schoolwide STEM presentations, the coding team had to reprogram the robots.

“I was so happy and so pleased with them because they were just so into it, following directions, and just really understanding what to do,” said Kearns. “When you see that, that’s what gets you going. With education and all that’s been going on for the past couple of years, this made it. It made you feel good.”