HOLLYWOOD | Someone vandalized the archdiocesan Respect Life Office in Hollywood over the Memorial Day weekend, scrawling threatening graffiti on its outer walls.

“This threat is similar to those received by numerous pregnancy help centers around the country in the wake of the national news regarding the Dobbs case before the Supreme Court, and the possible overturning of Roe v. Wade,” said Rebecca Brady, archdiocesan director of Respect Life. 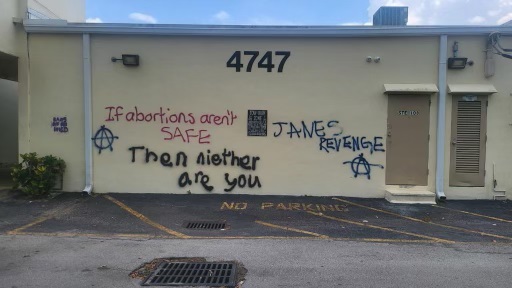 Picture of the vandalized outer walls of the Respect Life Ministry's main office in Hollywood. The vandalism took place shortly before midnight May 28, 2022.

The vandalism took place shortly before midnight May 28, 2022. It was discovered by a cleaning crew the next day, Sunday. The misspelled threat read: “If abortions aren’t SAFE then neither are you.”

Brady said the building’s security cameras captured the vandals and the footage has been shared with the Hollywood Police Department.

“We believe the intention of this vandalism was to scare and intimidate us,” said Brady. “Respect Life Ministry will not back down, we will continue extending the love and mercy of Christ to all regardless of creed. We also now have the opportunity to learn want it means to love our enemies.”

The Supreme Court is expected to issue a decision in Dobbs v. Jackson Women’s Health Organization before its term ends in late June. Dobbs is a case regarding a Mississippi law that would ban most abortions after 15 weeks of pregnancy.

A leaked draft of an opinion written by Justice Samuel Alito would indicate that the court is prepared to rule in favor of that Mississippi law, rolling back the nearly unlimited right to abortion first outlined in its 1973 Roe v. Wade decision; or go even further and overturn Roe v. Wade entirely, finding there is no constitutional right to abortion.

“If this were about choice for our opponents, then they would support what we are doing in providing alternatives to abortion,” said Brady. “Ministering to over 2,600 unique men and women annually, accompanying them on their journey of parenthood, providing free counseling, education, essential baby items, and more. What have the abortion providers offered in terms of free services and support when men and women choose life?

“We invite everyone to prayer,” she continued, “for conversion for those who have committed this crime; for safety for our faithful providing compassionate care in our pregnancy help centers, on the sidewalks; and healing for those wounded by abortion. And we pray that one day this will cease to be a source of contention, because we will have come together as a society to support families in such a way that abortion becomes unthinkable.”

Patrick Herlihy - 06/04/2022 08:57 AM
Jeremiah 1:5 Before I formed you in the womb I knew you, Thank you Respect Life Ministry and all your volunteers. May the Lord's favor precede you.

Dr. David Masters - 06/03/2022 09:38 PM
Dear Pro-Life Champions - Fear not. Remember the wisdom of MLK: "Darkness cannot drive out darkness; only light can do that. Hate cannot drive out hate: only love can do that." Day-in & day-out, you boldly magnify God's light & courageously share God's love with his most vulnerable children.