At Columbus: Giving back so students can go 'Adelante'

Archbishop blesses new building for science and the arts made possible by alums, donors 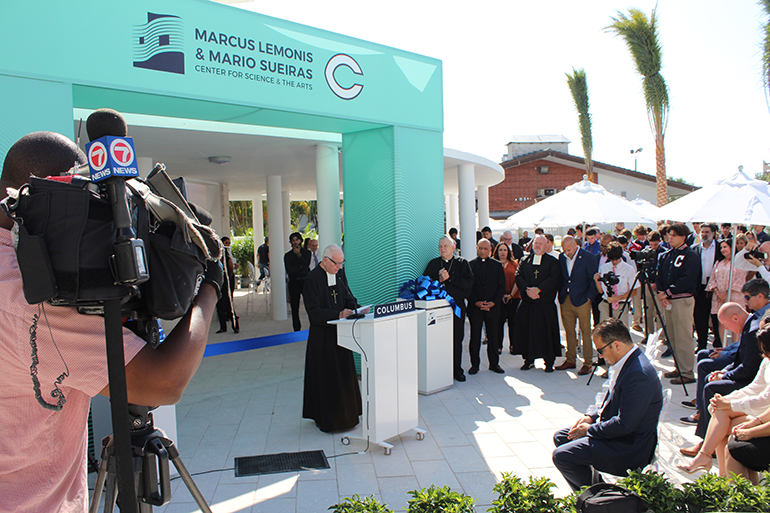 Marist Brother Kevin Handibode, former president at Columbus High, delivers a prayer and remarks during the ribbon cutting ceremony for the new Marcus Lemonis and Mario Sueiras Center for Science and the Arts building at Christopher Columbus High, which was blessed and inaugurated on April 28, 2022. 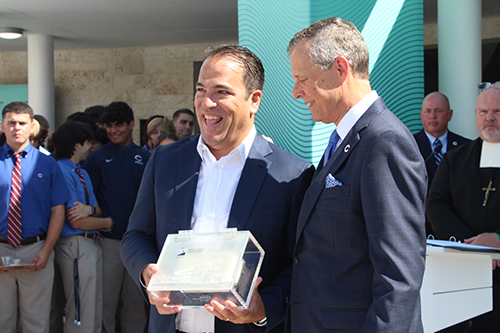 Columbus President Thomas Kruczek presents Mario Sueiras, class of 1991 alumnus, with a cornerstone honoring his donation to the new Marcus Lemonis and Mario Sueiras Center for Science and the Arts building at Christopher Columbus High inaugurated and blessed on April 28, 2022.

The Marcus Lemonis and Mario Sueiras Center for Science and the Arts is a four-story, 100,000 square-foot, state of the art and eco-conscious, LEED gold-certified building which fuses the latest in resources and space for students pursuing interests in STEM (Science, Technology, Engineering, and Math) and the visual and performing arts.

Andrew Quintana, a senior at Columbus involved in STEM, is one of many already reaping the rewards of the new tech labs. “I think it gives us a pretty great opportunity that a lot of students don’t get. We could work on really any project that comes to our brain.”

Students were working in the labs and different classrooms when Archbishop Thomas Wenski came by April 28, 2022, sprinkling holy water to bless the new building. At aMass celebrated earlier that morning, the archbishop thanked those involved in the project, and highlighted the opportunities students will have because of it. 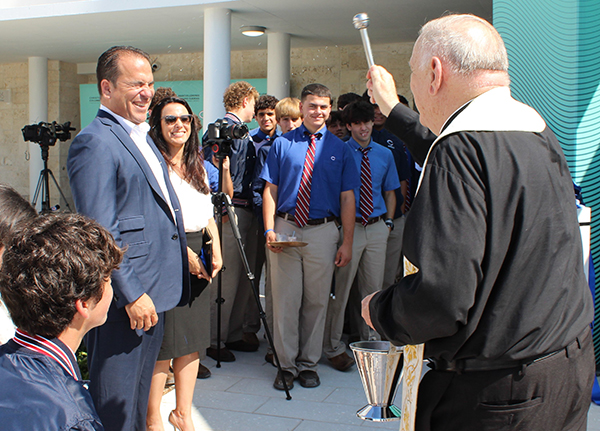 Archbishop Thomas Wenski blesses donors Mario Sueiras and his wife Sandra, along with students, faculty, and guests, with holy water during the inauguration of the new Marcus Lemonis and Mario Sueiras Center for Science and the Arts building at Christopher Columbus High School on April 28, 2022.

“The new Science and Arts Center, made possible through the generosity of Marcus and Mario, and so many others, will enhance the learning experience here at Columbus so that the education you receive here will draw faith, culture, and life into harmony. In a world of great dissonance, we need that harmony,” the archbishop said.

After the ribbon-cutting ceremony, Sueiras, a 1991 alum who made a generous gift towards the building’s construction, told the Florida Catholic, “If you build it, they will come.”

But there is more to a school than its facilities, he said. “Honestly, it’s not the buildings. It’s the brotherhood that’s been built.”

He described what the Marist Brothers started in 1958, in a “weird, little spot of land” in southwest Miami, as a brotherhood still palpable on campus, cross-generationally alive in students, faculty and staff. 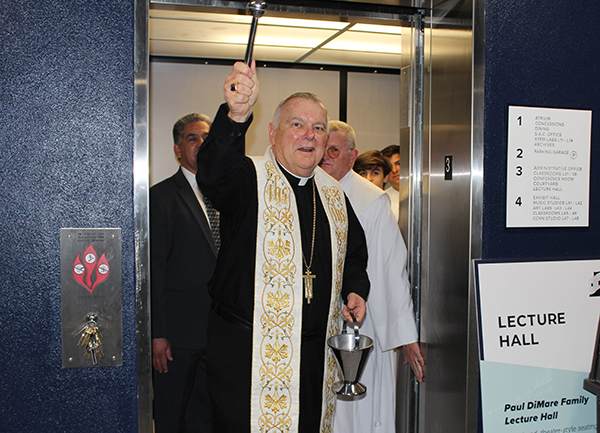 Archbishop Thomas Wenski steps out of an elevator as he blesses with holy water the interior of the new Marcus Lemonis and Mario Sueiras Center for Science and the Arts building at Christopher Columbus High School on April 28, 2022.

“Sometimes people say this school is magic, and it makes no sense. It gets in us. It’s the most bizarre thing in the world,” Sueiras said.

“Brotherhood” at Columbus is a term not taken lightly. In one aspect, it represents the Marist Brothers, a community founded by St. Marcellin Champagnat, who have dedicated themselves to the education and spiritual formation of young men for over 200 years.

He encouraged students to follow the tradition of the alumni who walked the same grounds before them, and to never forget the friendships and lessons they learned at Columbus. He also told students to remember the words from the Gospel of Luke (12:48): “To whom much is given, much will also be required.” 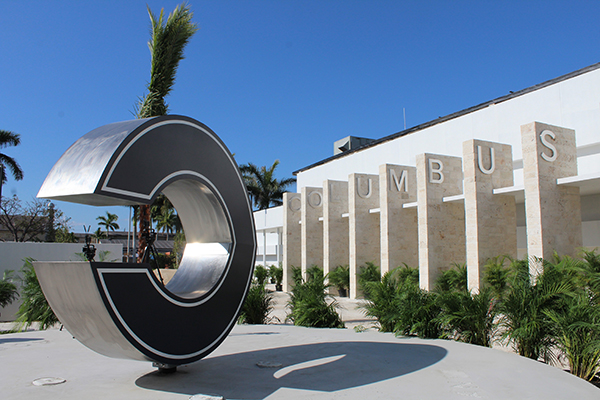 The trademark Christopher Columbus High "C" is seen outside the new Marcus Lemonis and Mario Sueiras Center for Science and the Arts building. It was a gift to the school in honor of Patrick and Mary Ann Bell.

Lemonis and Sueiras have taken to heart that advice and lived it in their professional lives. Lemonis is the CEO of the RV chain Camping World. He also has launched several business-oriented TV shows such as “The Profit” and “Streets of Dreams.” Sueiras is an insurance professional who leads the GEICO offices in Miami.

For both, giving back is essential. That is why when Marist Brother Kevin Handibode, former president of Columbus, reached out with plans for a new building on campus, they were ready to help.

In a 2020 video presentation, current Columbus President Thomas Kruczek announced that the building would be named after Lemonis and Sueiras for their generous donation towards its $25 million cost. Their decision to give together came during the COVID-19 pandemic. Sueiras explained that, at the time, there were so many negative things happening at a global scale that they wanted to provide something positive towards the future. 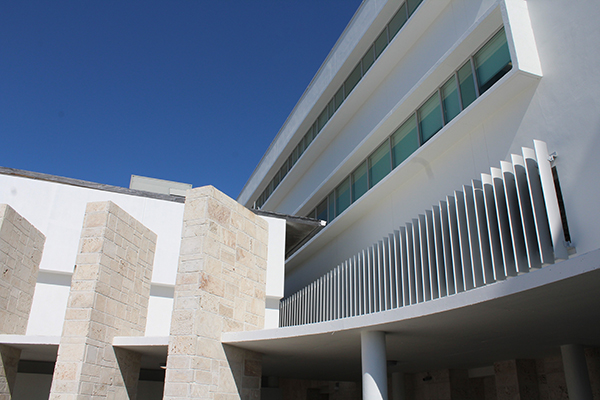 The new Marcus Lemonis and Mario Sueiras Center for Science and the Arts building at Christopher Columbus High was blessed and inaugurated on April 28, 2022. The building, funded by alumni and donors, hosts 100,000 square feet for STEM, art, music, exhibition and performance spaces, an indoor parking garage, and a locker room for the basketball team.

As Columbus Explorers, it made sense for them to look ahead and move forward, since the school’s motto is “Adelante.”

“We not only are happy to participate in this great project, but we’re asking other parents and other alumni to, at whatever level they can, continue to understand that Columbus is about building men for the future,” said Lemonis, encouraging others to give.

According to Brother O’Riordan, almost 1,000 donors gave towards the building project, as witnessed by the names of sponsors that dot the building. Among them: the Robert Sanchez Family Robotics and Engineering Lab, the Muñoz Family Innovation Hub, the May and Frank Rotolante Art Lab, the Paul DiMare Family Lecture Hall, the Lou de la Aguilera Family CCNN Studio, and the “Coach DQ” Courtyard, donated by Jorge Rico in memory of Columbus student Daniel Quesada.

For Sueiras, seeing his name on a building is also a tribute to his father, another Mario Sueiras. “It’s my name, but it’s really my dad’s legacy,” he said.

That legacy will benefit many students, including his son, also named Mario, who is currently a sophomore at the school.

“To leave something where future generations can keep benefiting from the school, I think just has so much value,” said Sandra Sueiras, the wife of Mario. “We’re proud to be a part of it and support it as a family.”

With the Center for Science and the Arts nearly maxing out the building space on Columbus’ campus, Mario Sueiras joked that the only place left to build is up. 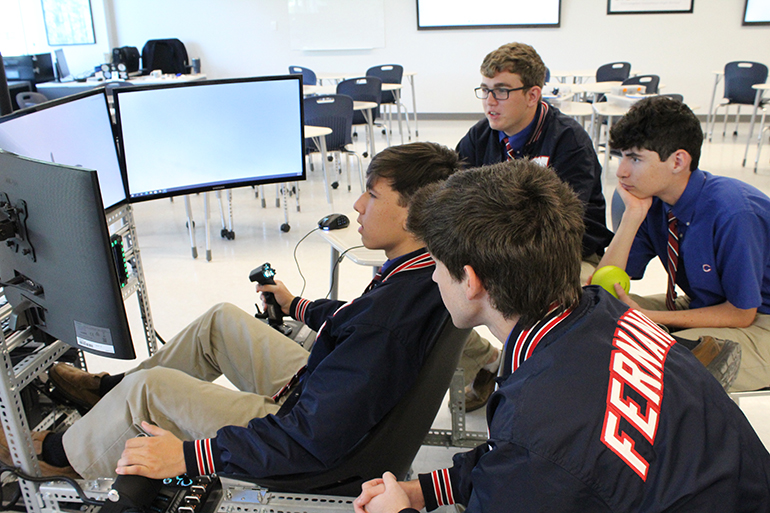