We celebrate this today on the 28th of April because today is the feast day of a Marist saint, St. Peter Chanel. You all know – or you should know – something of Marcellin Champagnat. But Peter Chanel? Maybe not so much. 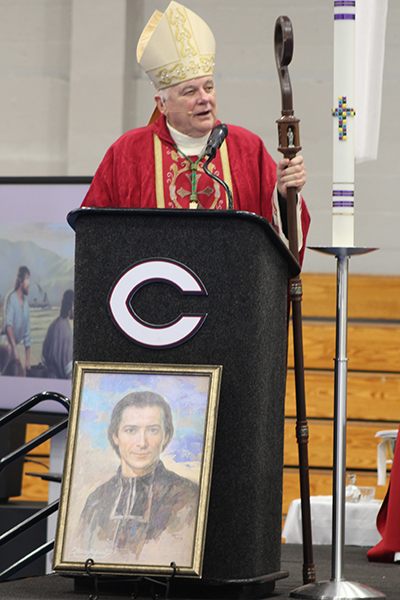 Archbishop Thomas Wenski preaches his homily with students, teachers, staff and guests during a Mass he celebrated at Christopher Columbus High School in Miami on April 28, 2022. After the Mass, he blessed the new Marcus Lemonis and Mario Sueiras Center for Science and the Arts building.

Peter Chanel answered the call that Jesus made to the Apostles in the Gospel reading – the call he makes to each one of us: “Follow me.” He followed Jesus as a Marist missionary priest, leaving his native country, France, and going to Oceania and there, he was to witness to Christ even to death.

He and another Marist brother were left on a small island near Tahiti called Fortuna. When the bishop who oversaw the missionaries left them there, he said he’d be back in six months. It took the bishop five years to get back to them. In the meantime, he had learned the language of the natives but was not too successful in converting the natives for he only converted a few. But as Mother Teresa would say: We are not called to be successful but faithful. And Peter was faithful. And later when he succeeded in converting the son of the native chieftain, the chieftain was not pleased. He feared – rightly – that if people began to believe in this priest’s God it would undermine his authority over them. And so, he sent someone to club him to death.

So, this Marist priest was martyred – which is why I am wearing red today. The word “martyr” comes from the Greek which means “witness.” Christian martyrs like Peter Chanel witnessed to God’s love – even to death. Their willingness to die for the sake of Christ and his Gospel might seem like “foolishness” to those who follow the wisdom of this world, but as St. Paul says in today’s first reading, “the foolishness of God is wiser than human wisdom and the weakness of God is stronger than human strength.”

That God’s foolishness is wiser than human wisdom is shown in the witness of Peter Chanel’s life and death. While he was alive, he had little luck in converting the natives but within two years after his death almost everyone on that island was a Catholic. As one ancient Father of the Church said: The blood of martyrs is the seed of faith.

The seed of that faith is also planted here at Christopher Columbus and in the hearts of all the faculty and students. A Catholic education, and a Catholic education in the Marist tradition, is to prepare students for life – both this life and the life to come. For this reason, we hope that the learning experience here at Columbus will equip the students to do well; but also, to do good.

In other words, in the Marist tradition, this school is to help lead you, young people, to know and love Jesus and Mary, because in the spirit of Champagnat, your teachers are convinced that you can all become good Christians and good citizens.

The new Science and Arts Center made possible through the generosity of Marcos and Mario, and so many others, will enhance the learning experience here at Columbus so that the education you receive here will draw faith, culture, and life into harmony. In a world of great dissonance, we need that harmony.

It is when we have that harmony within us, we can respond generously to the Lord’s call: Follow me.