A miracle in Miami?

Cardinal from Venezuela visits diaspora in U.S., speaks of possible miracle here attributed to 'doctor of the poor' 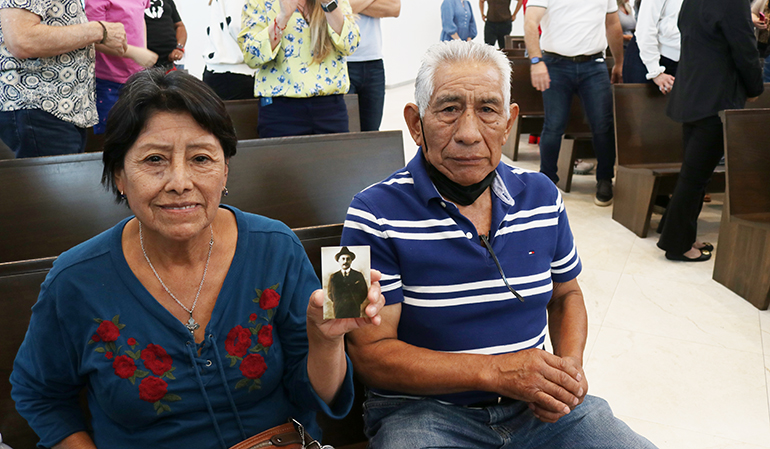 Lidia Alcalá and her husband, Isidoro Ureta, hold the holy card of Blessed José Gregorio Hernández while taking part in the Mass celebrated by Cardinal Baltazar Porras of Caracas, Venezuela, at Our Lady of Guadalupe Church in Doral, May 1, 2022. 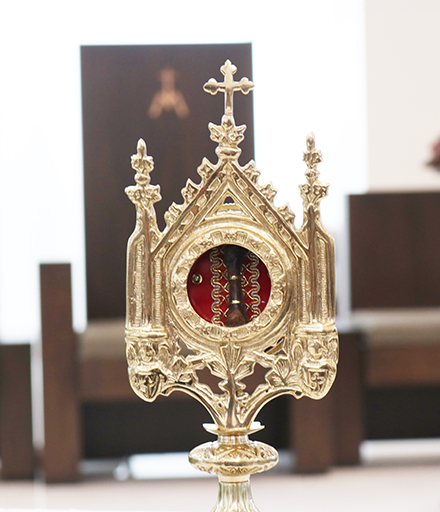 First-class relic of Blessed José Gregorio Hernández brought by Cardinal Baltazar Porras of Venezuela during his visit to several U.S. cities, including his May 1, 2022 stops at Our Lady of Guadalupe Church in Doral and St. Katharine Drexel in Weston.

MIAMI | When she had kidney surgery 18 years ago, Lidia Alcalá prayed to José Gregorio Hernández, known in Venezuela as the "doctor of the poor," that "everything would go well for me."

A week after the procedure, "he visited me, it was him. He came as a doctor, with two assistants, and opened the wound. He told me not to worry, that everything was fine," said Alcalá.

"Since then, I have not felt any pain. I am doing very well," said the native Peruvian, who lived in Venezuela for more than 40 years and later emigrated to the United States with her husband, Isidoro Ureta, also from Peru.

"She has only one kidney," said Ureta, adding that the good health of his wife and many other people have caused the devotion to José Gregorio to grow. They learned about him when they attended the church of Nuestra Señora de la Candelaria, in Caracas, where his remains are laid to rest.

"I know that he was a doctor, that he cared for the poor. When he died he began to work miracles," said Alcalá after hearing Cardinal Baltazar Porras, apostolic administrator of Caracas and Archbishop of Mérida, Venezuela, speak about Blessed José Gregorio on May 1, 2022, at Our Lady of Guadalupe Church in Doral.

"No other gathering unites all Venezuelans save the one for José Gregorio Hernández," Cardinal Porras said as he began his presentation in front of representatives of the largest community of Venezuelans in the United States. Hours earlier he had visited the parish of St. Katharine Drexel in Weston, where another large community of Venezuelans also gathers. After his talk, the cardinal presided at Mass and greeted his countrymen. 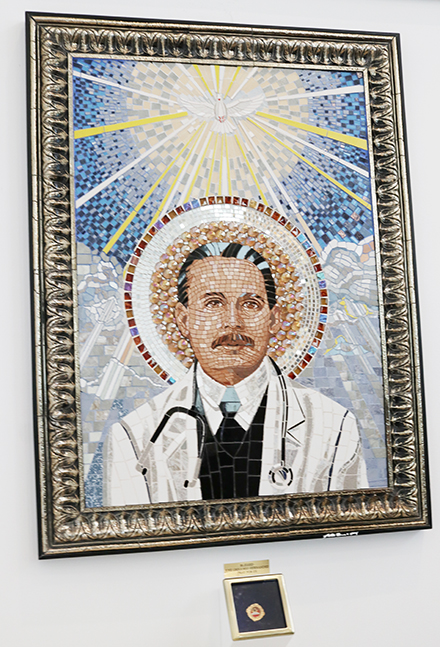 Mosaic of Blessed José Gregorio Hernández that is found at Our Lady of Guadalupe Church in Doral. 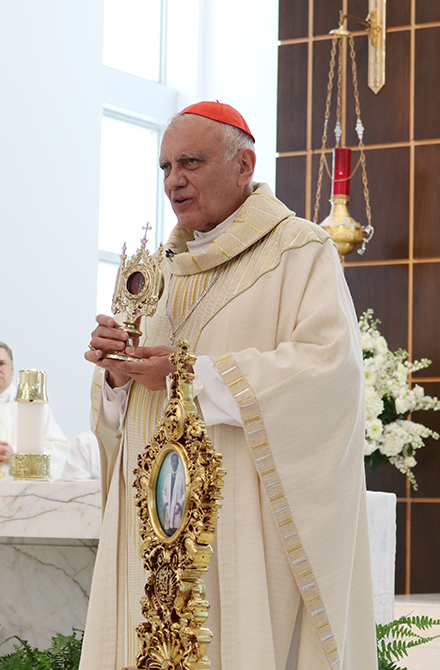 Cardinal Baltazar Porras of Caracas holds the first-class relic of Blessed José Gregorio Hernández which he used to impart the final blessing at the Mass he celebrated with the Venezuelan community at Our Lady of Guadalupe Parish in Doral, May 1, 2022. 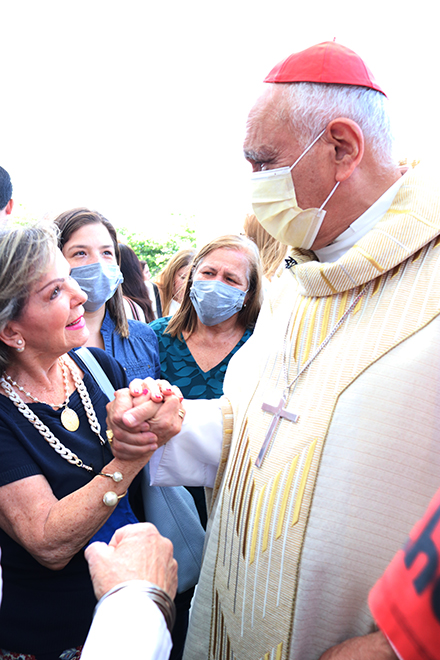 Faithful of Our Lady of Guadalupe Church in Doral greet Cardinal Baltazar Porras of Caracas after the Mass he celebrated for the largely Venezuelan community, May 1, 2022.

Miami was the last stop of a 10-day visit to several U.S. cities including New York, Washington, D.C., and Boston, where Cardinal Porras celebrated Masses, met with religious organizations, Venezuelan business owners and expatriates. He brought with him a first-class relic of José Gregorio, whom Pope Francis declared blessed just a year ago. The relic is a phalanx of one of his fingers, which will remain in the cathedral of Caracas. "But we have also left authentic relics in the cities we have visited," Cardinal Porras noted.

The cardinal and those accompanying him also distributed among the faithful a holy card with the image of Blessed José Gregorio and a second-class relic, a small piece of cloth that covers the tomb where his remains are kept.

The trip aimed to strengthen ties with the Catholic Church in the United States and with the Venezuelan communities in this country, and "to make our projects and programs known to the community, especially to the Venezuelan business people who are here in the United States," said Carlota Blanco, development director for the Archdiocese of Caracas. She and other Venezuelan priests accompanied the cardinal on his tour.

A MIRACLE IN MIAMI?

Cardinal Porras pointed out that the first reason for his visit "is the canonization of the saint." To that end, he met with Archbishop Thomas Wenski on May 2, to discuss the confirmation of a possible second miracle by Blessed José Gregorio.

"It is not enough to be a saint; you have to make him a saint," Cardinal Porras said, adding that this was a layman, a pioneer in medicine, whose devotion "is not to be admired, but imitated."

The cardinal pointed out that an ecclesiastical tribunal will be constituted by the Archdiocese of Miami in mid-May, made up of representatives from Caracas, Rome and Miami, to gather all the documentation of the possible miracle, "so that we can submit it as soon as possible to the Vatican, have it approved and then we will have, not the Blessed José Gregorio, but Saint José Gregorio."

"At this time, we have three requests: two in Venezuela and one here in Miami, about the healing of a man who was practically considered terminally ill and who today is jumping and joyful," the cardinal added.

The two doctors who treated this person, one Hindu and the other Muslim, "have said that there is no scientific explanation for the healing of this man," Cardinal Porras said. He noted that the patient was not even acquainted with José Gregorio, but the people around him entrusted his recuperation to the blessed doctor, and though he was practically declared incurable, the patient regained his health. 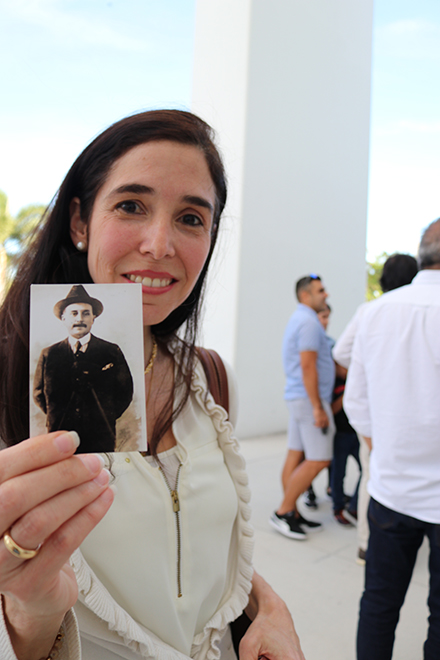 María Gabriela Machado, a Venezuelan devotee of Blessed José Gregorio Hernández, shows a holy card with his image at the conclusion of the Mass celebrated by Cardinal Baltazar Porras of Caracas, May 1, 2022 at Our Lady of Guadalupe Church in Doral. 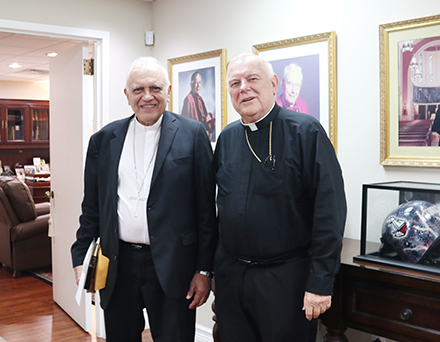 Venezuela’s Cardinal Baltazar Porras meets with Miami Archbishop Thomas Wenski at the Pastoral Center of the Archdiocese of Miami, May 2, 2022. This visit was the last stop of Cardinal Porras' tour of several cities in the United States, where he brought a relic of Blessed José Gregorio Hernández's and met with the Venezuelan diaspora.

"What we want to do is to document all this in order to present it to the Congregation [for the Causes] of Saints for study, both by the medical commission and the theological commission, because two things are needed: not only the part that has to do with the healing, but also the other part, which is the prayer of intercession; that is to say, who, how and at what moment this testimony of requesting the health of a person through the intercession of Blessed José Gregorio occurred," the cardinal explained.

The other two cases are under study. According to canon law, the miracles cannot be studied at the same time; they have to be studied one by one.

The postulator of the process of beatification and canonization of José Gregorio is Silvia Correale, a canon lawyer who is in Rome; and the vice postulator is Father Gerardino Barracchini, episcopal vicar for sainthood in the Archdiocese of Caracas, and parish priest at the sanctuary where the remains of Blessed José Gregorio are kept.

Father Barracchini was part of the delegation that traveled to the United States, but he had to return to Caracas a few days early for the April 30 anniversary of the beatification.

During his visit to the various Venezuelan communities in the U.S., Cardinal Porras said that he was impressed by how much they all "long for the homeland," which tells him that their migration has been driven by the living conditions in Venezuela.

"When it is sort of a forced exile, it creates a feeling of pain, of uprooting, of the need to adapt, which also implies leaving not only the land, but also the loved ones," the cardinal explained.

According to data from the United Nations, as of September 2021, more than six million Venezuelans were reported to have left their country. Most of them have emigrated to other Latin American countries and to the United States.

The growing situation of poverty in the South American country is evidenced by "the increasing number of people who continue to leave, especially young ones, looking for a better quality of life", said the cardinal in an interview with the EFE news agency, conducted at Miami’s Pastoral Center.

Currently, the pandemic has served to keep Venezuela’s population isolated, preventing any kind of public gathering for health reasons. In addition, there is a serious lack of information about what is really happening in the country.

"It is not true that the population is calm. Every day there are many demonstrations, but they are not publicized, and they are not strictly political. People complain about the lack of electricity, of water, of work, of not being able to sustain their basic needs, but this is immediately repressed and considered a crime," said Cardinal Porras.

Amid all this, he added, "I believe that the first and most important thing is that this is a Venezuelan problem, and we Venezuelans have to solve it. But international support is undoubtedly needed. As Pope Francis points out, we are defeated if we look like we are at a wake, if we look like we are in a cemetery. We cannot say that we cannot get out of this situation."

"We have to put into action creativity, steadiness, courage and faith to look for solutions that are peaceful, that awaken hope,” said the cardinal. “Hope is built, not found, and it is the only thing that can give us peace and that can also give us a greater sense of equality."

THE ‘DOCTOR OF THE POOR’

Archbishop Thomas Wenski greets Cardinal Baltazar Porras of Caracas at the start of the Mass celebrated by the cardinal for the Venezuelan community gathered at Our Lady of Guadalupe Church in Doral, May 1, 2022.