Behind the scenes at the cathedral

MIAMI | As part of their in-person meeting after reading the same book together, fifth graders from St. Louis Covenant School in Pinecrest got a behind-the-scenes tour of St. Mary Cathedral.

On what both schools dubbed “We Are All God’s Wonders Day,” five groups of more than 80 students from St. Louis and St. Mary Cathedral School rotated between “Wonder” activities at the cathedral school and tours of the cathedral led by St. Mary’s religion teacher Michelle Peral and principal Julie Perdomo.

Father Christopher Marino, rector of the cathedral, greeted the visiting students with a “welcome home,” explaining that the cathedral serves as the mother church for all Catholics in the Archdiocese of Miami. 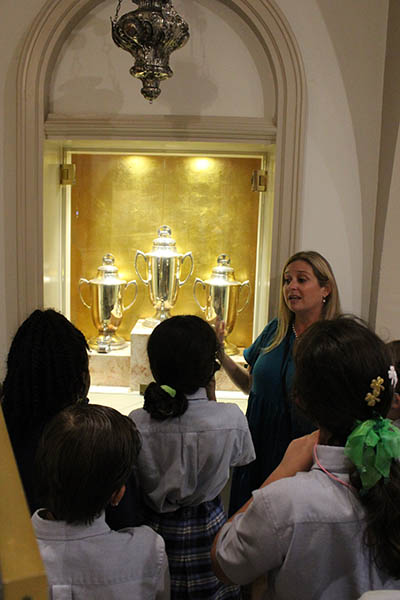 On tour with Perdomo, students learned about the cathedral’s history, the celebrations it hosts and some of the treasures it keeps.

Their first stop was at the case where the chrism oils are kept, next to the newly restored Altar of the Mystical Marriage of Mary and Joseph.

On their way to the sanctuary, Perdomo warned the students about the larger than average steps that lead up to the space. They passed the crests of previous archbishops from the Archdiocese of Miami that ornament the side walls of the sanctuary, coming to a stop at the cathedra in the rear: the bishop’s chair adorned with Archbishop Thomas Wenski’s coat of arms.

“That chair is a chair that is only to be sat on by the current archbishop of Miami, not any other archbishop,” Perdomo explained. “It’s very unique, it’s very important and very few, if any people, have received permission to sit there.”

A student asked what would happen if someone who is not the archbishop sat there. “Archbishop Favalora [his predecessor] is the only one who sits there occasionally,” she answered.

Looking up to the area above the sanctuary, she pointed to the complex mosaic that encircles it. Standing 11 feet high and 70 feet long, it depicts 14 scenes from the life of Mary. Above that are several stained-glass windows depicting the life of Jesus, as well as a concrete dome that stands 76 feet above the entire space.

Coming down from the sanctuary, Perdomo led students to the Blessed Sacrament Chapel which contains another stained-glass window, this one depicting the Annunciation and the Birth of Christ. Hanging above the tabernacle and altar is a tapestry that portrays Jesus breaking bread with two of his disciples after their encounter on the road to Emmaus. Perdomo highlighted that in 1987, St. John Paul II prayed at that chapel during his visit to Miami for the start of his U.S. tour.

Next up for Perdomo and the students was the sacristy where priests, deacons, and altar servers vest and prepare for Mass. Located in a room behind the main sanctuary, some students from St. Mary who serve at Mass recognized the space and pointed out details to other students. Perdomo opened one of the closets to reveal an array of purple, green, and cream-colored vestments for celebrants, as well as a Metropolitan Cross in a corner of the room.

The sacristy also contains a private vesting room used by Miami’s Archbishop emeritus John C. Favalora. Students marveled at the monstrance stored there as it shone in front of a bright stained-glass window.

Returning to the nave of the cathedral, Perdomo led students down the center aisle, pointing out more stained-glass windows that display various apparitions of Mary. At the end of the aisle, near the main entrance, they stopped at the crest of the Archdiocese of Miami depicted on a large tile on the floor: a palm tree and two crosses. Perdomo pointed out that most people, out of respect, do not step on it.

In the choir loft, students viewed the cathedral from its highest point, overlooking rows of pews and the chancel. They also had an up-close encounter with the cathedral’s pipe organ and its hundreds of pipes. Perdomo pointed out an additional stained-glass window that is often overlooked because of its location.

The group ended their tour at one of the chapels in the exterior of the nave, where they visited a resting Christ and sorrowful Virgin Mary. The space also houses a baptismal font.

As the tours ended, Perdomo invited the students to return to the cathedral for Sunday Masses at 10 a.m.

“Come teach your parents what you have learned about the cathedral, the mosaic, the stained glass, and the history. Like Father Marino said, this is your home, and all of you are always welcome.” 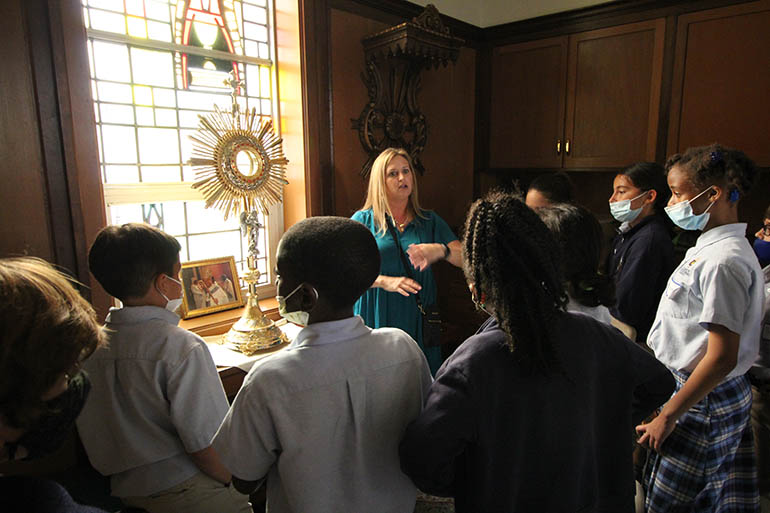