Thinking outside the shoebox

Some of the volunteers for Loving Soles pause before a final inspection of the 12,000 pairs of shoes they collected for Camillus House. From left are Danika Pachas, twins Sophia and Susanna Inguanzo, Elise Cuali, and Jaylene Guerra.

Loving Soles do a final inspection of the 12,000 pairs of shoes they collected for Camillus House. From left are Nicholas Lozano, Sophia Inguanzo, Susanna Inguanzo, Christopher Inguanzo and Lucas Diaz.

Nicholas Lozano of Loving Soles hands off a bag of shoes to Wil Valencia of Camillus House.

Loving Soles volunteers hand bags and boxes of shoes to a worker for Camillus House.

Some of the 12,000 pairs of shoes in the Loving Soles project are stylish and colorful.

Loving Soles volunteers show off a few of the 12,000 pairs of shoes they rounded up for Camillus House this year.

The Inguanzo siblings pause outside their home in Miami Lakes, headquarters of the Loving Soles collection drive for shoes for the homeless. From left are Sophia, Christopher and SophiaÃ¢â¬â ¢s twin, Susanna.

MIAMI LAKES | When a group of Catholic students thought of how to help the homeless, they lowered their sights – to ground level.

Young volunteers for the Loving Soles project donated thousands of shoes in April to Camillus House, an outreach to Miami’s homeless. 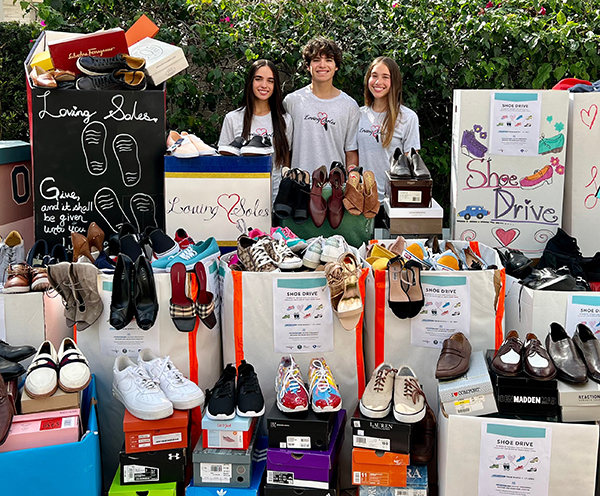 The Inguanzo siblings pause outside their home in Miami Lakes, headquarters of the Loving Soles collection drive for shoes for the homeless. From left are Sophia, Christopher and Sophia's twin, Susanna.

Months of volunteer work culminated April 22, 2022, as a van pulled up to the home of Ramiro Inguanzo to collect a record 12,000-plus pairs of shoes. The collection was the fruit of more than three months work for the dozen teens, collecting, cleaning, sorting and boxing the items, including the Inguanzo siblings: Susanna, Sophia and Christopher, all students at Archbishop Edward A. McCarthy High.

Why? Because few others do it, the youths say.

“Most of the time, people give clothes or food,” said Jonathan Lozano, 16, one of those who showed up to help load the Camillus House truck. “If I were in their situation [of the homeless], I would want someone to do this for me.”

“These kids are amazing,” said Fernández. “Every year, they get donations from more schools and municipalities. It’s a labor of love for them.”

Those in the Loving Soles project hail from several Catholic schools, including Archbishop McCarthy, Christopher Columbus and Msgr. Edward Pace.

Lucas Diaz, 14, saw the shoes building up in the Inguanzo garage and asked Ramiro about the project. “I thought it was a great idea,” Lucas said. “It’s giving back to others who are not so lucky.”

Elise Cuali, 16, said this was her second year with Loving Soles. “It makes me grateful, appreciative of my own privileges, and that I'm not homeless.” 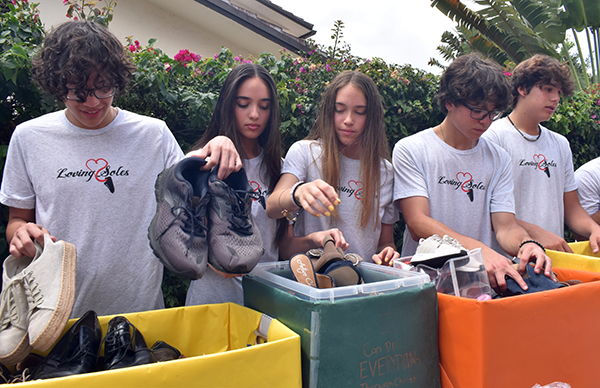 Loving Soles do a final inspection of the 12,000 pairs of shoes they collected for Camillus House. From left are Nicholas Lozano, Sophia Inguanzo, Susanna Inguanzo, Christopher Inguanzo and Lucas Diaz.

Teaching plus “experiential learning” have apparently made the difference for the young volunteers, Inguanzo suggested.

“They go to Catholic schools, which teach them about almsgiving,” Inguanzo said. “And some of the kids have volunteered at Camillus House. Once you see it with your own eyes, it makes a difference.”

The Inguanzos’ involvement with Loving Soles began in 2018 with a field trip to Camillus House. Fernández told them that the shelter gets a lot of clothes but few shoes. The Inguanzos and their friends decided to make it their project.

At least 19 municipalities have helped as well. In Miami-Dade, they range from Pinecrest in the south to Golden Beach in the north, with the likes of Miami Beach and Miami Shores in between. Some Broward cities also took part, including Dania Beach and Hallandale Beach.

“So many people were willing to help, especially in Miami Lakes,” said volunteer Danika Pachas, 17.

Seven hundred pairs of shoes came from Bal Harbour alone, where Inguanzo is the city manager. One anonymous resident actually bought 200 new pairs for Loving Soles, he said with amazement.

Even State Attorney Katherine Fernández Rundle sponsored a drive at her own office, yielding 500 pairs of shoes.

“A good pair of shoes can provide more than just physical comfort,” Rundle said in a statement. “They can provide the emotional first step necessary to snapping those ropes keeping someone tied to the streets.”

Although the Camillus House trucks arrived in April, the Loving Soles project began in January. That’s when the youthful volunteers began collecting boxes – from the likes of Amazon or people who were moving – totaling more than 200 containers.

In February, they began asking schools and municipalities to start rounding up shoes. The following month, the kids began driving to the donors and collecting shoes.

Susanna, her twin, added that it’s also a time for spring cleaning, when families scrutinize what to keep and what to toss. “We ask people, ‘If you're going to throw out shoes, why not donate them?’” 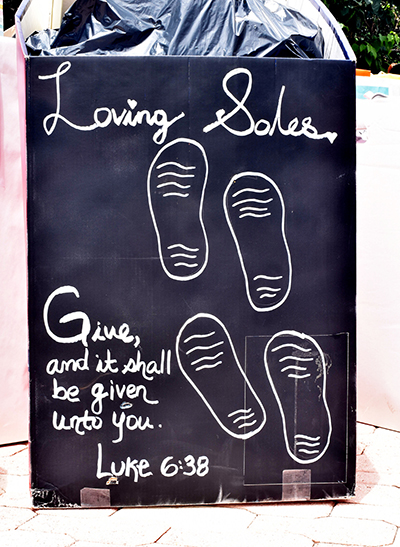 Their focus then turned to organizing the shoes by men's, women's and children's styles. The task was eased this year because some of the donors had already presorted their shoes.

By April, the Inguanzo home was jam-packed. Bags and boxes filled the garage, the family room and the dining room, lining the halls – and overflowing into the garage of Ramiro’s mother, two blocks away.

Finally, Camillus House workers showed up with a truck on April 22, but it had room for less than half of the shoes. They promised to return with two more trucks on May 6, Ramiro said.

She added that donations of shoes and clothes benefit the needy not only physically but psychologically.

“You lose your dignity when you're on the street,” Fernández said. “People come in with shoes that are torn and have holes in them. When they get new clothes and shoes, they feel refreshed, rejuvenated.”

Next step comes in the summer, when the shoes will be distributed. And yes, Ramiro Inguanzo said his three kids plan to help give out the shoes, again with some friends.

“This is where they get to see the people who benefit from the collection,” Inguanzo said. “For them, this is the cool part.”

And next year? More of the same. The youths plan to broaden the Loving Soles appeal to other schools and cities, both in Miami-Dade and Broward counties.

“Every year, we want to keep expanding,” Sophia Inguanzo said. 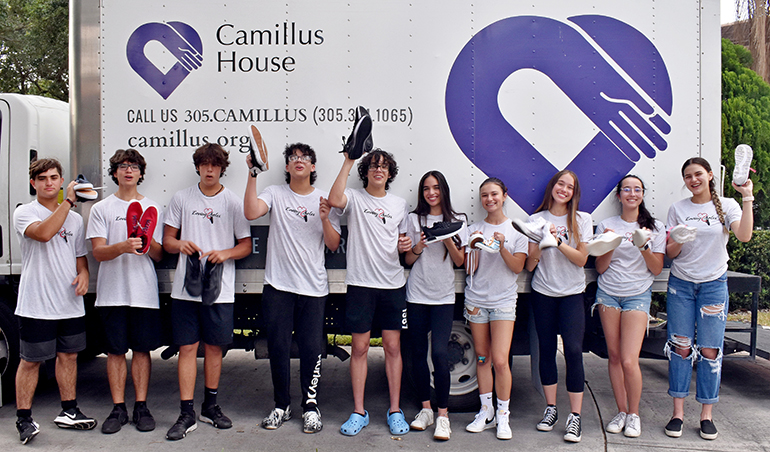 Loving Soles volunteers show off a few of the 12,000 pairs of shoes they rounded up for Camillus House this year.