Plus archdiocesan alumni among players in College Football Playoff 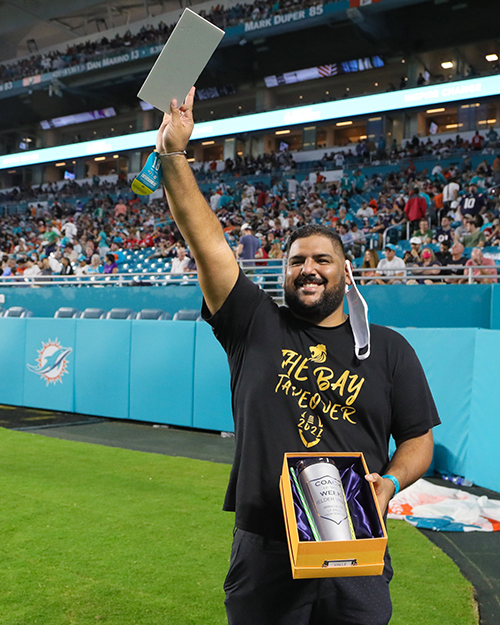 Immaculata-La Salle football coach Helder Valle waves to the crowd after being honored as a Junior Dolphins Coach of the Week during halftime of the New England Patriots game, Jan. 9, 2022 at Hard Rock Stadium. He was one of nine honored as top coaches of the year in South Florida.

The National Federation of High Schools Coaches Association chose the Royal Lions coach their Florida High School Athletic Association Coach of the Year. His Royal Lions finished a 10-0 regular season, then advanced to the FHSAA Class 4A playoffs for the first time since a back-to-back run in 1975-76. They accomplished this in Valle’s third season with the program.

Valle has been coaching since he was 17. He coached 10 years at Miami’s Westminster Christian, coaching back-to-back-to-back district champions and two All-Americans. He then served as a volunteer coach at Florida International University, then as a defensive coordinator for a Miami Senior High team that made the state semifinals.

Now he’s at Immaculata-La Salle in his first head-coaching stint and said he does not want to leave. “I love it at this school,” Valle said. “I have such love for this school because they gave me a shot. Sister Kim (Keraitis) and (athletic director) Nicholas Fernandez are why we’re successful. They believed in the plan I had, and they backed me up.”

Valle said the coaches promised each other before the season that they’d be 10-0. “We were talented. We knew we had a couple tough games here and there,” he said. “But we were better-coached, better-conditioned.”

The Royal Lions had gone 4-3 last year without the typical offseason conditioning. But they were able to put in the offseason work. His junior and seniors started with him as freshmen and sophomores. They started off with a 4-6 record three years ago. Valle said the team could run and pass the ball well, and the defense was strong. 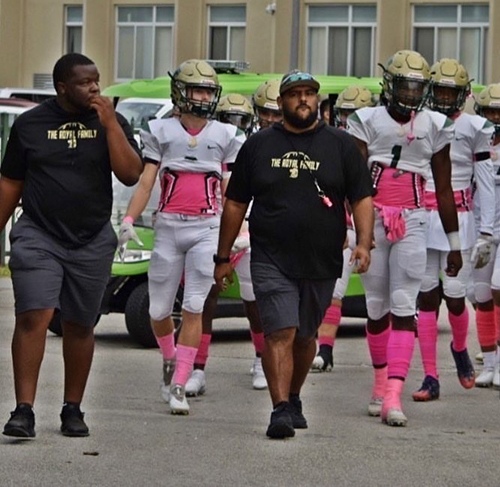 Immaculata-La Salle's football team is coached by Helder Valle, now in his third season. Coach Valle has turned the culture and program around with a great support staff and outstanding young men.

Immaculata-La Salle benefited from transfer Aris Angelo Jr., a senior who played at Christopher Columbus High his freshman and sophomore years, then at Coral Gables his junior year. He threw for 1,296 yards, a school-record 25 touchdowns and five interceptions in only eight games, after missing three games early in the season with a wrist injury.

Sophomore Jude Servius led the rushing attack, running for 782 yards and nine touchdowns, averaging 8.5 yards per carry. “He solidified the running-back position,” Valle said. “People got out of his way. He was a 5-9, 165-pound kid, but he ran angry.”

Elijah Henton, who caught 39 passes for 496 yards and seven touchdowns, and Demetrius Johnson (19 catches for 394 yards and nine touchdowns) led the receiving corps.

They operated behind an offensive line that had three seniors, although the unit played several players because of injuries. Senior left tackle Luis Bodden was the only player who played every game. Bodden has received a scholarship offer from NCAA Division II Miles College, which also offered scholarships to Angelo, running back Jarod Carr, defensive back Vashaud Williams and Servius.

While the offense struggled with injuries, the defense was largely injury free. Middle linebacker Eric Islami led the team with 79 tackles, including five sacks. Junior Dairo Melendez, a 6-2, 270-pound defensive tackle who had 63 tackles and four sacks, already has a scholarship offer from Division I Syracuse. “He’s agile, he can move. He is legit,” Valle said.

Lavaris Stanford led the nation with six interceptions through the first seven games, enough so that the teams started throwing away from the 6-2, 170-pound sophomore. Williams picked off four passes to go with his 47 tackles. Jalen Morris played through bruised ribs but made 45 tackles.

The Royal Lions beat three archdiocesan schools – the biggest of which was an 8-7 victory at rival Belen Jesuit on Sept. 3, 2021. Wins against St. Brendan and Archbishop McCarthy were also big, but the Royal Lions hadn’t beaten the Wolverines in 37 years.

“Belen and Immaculata were high schools in Cuba,” Valle said. “Both (Jesuit and De La Salle) fathers came to Miami and opened up schools. Beating them for the first time in 37 years was a big accomplishment. Having the season we had was great.”

The Royal Lions had three shutouts and lost in the playoffs to Fort Lauderdale Pine Crest 10-7. Valle said the season proves the future is bright at ILS.

“The next step is continuing to do the right thing and not be complacent,” Valle said. “I think Cardinal Gibbons does a great job of being more in the community. We’re getting there as far as providing a Catholic education for everyone. We have the support from the alumni base. We want to get to the level of Cardinal Gibbons and other powerhouse teams.”

Christopher Columbus advanced to the Class 8A state semifinals to finish 9-4. The Explorers lost to state champion Venice 35-7. In 2020, Columbus won the Tri-County Championship, a tournament of teams from Dade, Broward and Palm Beach counties which did not compete in the FHSAA State Series due to differing COVID restrictions.

Archdiocesan schools had 10 alumni on the rosters of Alabama, Cincinnati, Michigan and Georgia, the four universities in the College Football Playoff.

The Alabama-Cincinnati game featured six archdiocesan alums. Alabama has the most with five, all but one from St. Thomas Aquinas. Safety Jordan Battle, a junior, leads archdiocesan alums with 73 tackles, three interceptions and three pass breakups. Fellow former Raider Dallas Turner played all 13 regular season games at linebacker, making 25 tackles and 5.5 sacks. Defensive back Josh Jobe, who played his freshman through junior years at Columbus, had 38 tackles and two interceptions in 12 games. Former Raiders Braylen Ingraham and Kade Wehby did not play. Cincinnati has former Cardinal Gibbons defensive lineman Jah-Mal Williams, but the freshman redshirted and did not play a game.

The Michigan-Georgia game had four Aquinas alums, three of them at Michigan. Linebacker Anthony Solomon played eight games for the Wolverines. Ja’Den McBurrows played four games in his freshman year, making two tackles, while fellow freshman Jaydon Hood made one tackle in his only game. Georgia has former Raider Marcus Rosemy-Jacksaint, a sophomore wide receiver who had seven catches for 94 yards in 11 games for the Bulldogs.

A Chaminade-Madonna alum helped Michigan’s Ferris State Bulldogs win the Division II national championship with a 58-13 victory over Valdosta State. Senior defensive back Alex Thomas had four tackles and two pass breakups in the game. He played 11 games this year, tallying 17 tackles, three interceptions and six pass breakups. He also had a 99-yard fumble return for a touchdown.

Fellow Chaminade-Madonna alum Michael Edwards, a freshman defensive back, redshirted this year and did not play.