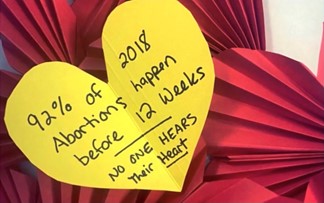 Yellow hearts with eye-opening bits of information decorated some classroom doors at Archbishop Coleman Carroll High School in Miami as part of the students' participation in the October 2021 Baby Bottle Campaign to raise funds for the archdiocese's Respect Life Ministry.

MIAMI | An innovative strategy to raise money for the Respect Life Ministry featured a competition among students and faculty at Archdiocese of Miami schools while also promoting a culture of life.

A little cash incentive to raise money didn’t hurt either.

The winners will be announced at the end of January, but Carmelite Sister Mara Medina, who teaches math and theology at Archbishop Coleman Carroll High School, said she was inspired by the $7,700.77 students at her school raised in just one month.

“Seven being the number of perfection, this is definitely the Lord blessing our efforts,” said Sister Mara, the school’s designated respect life representative.

For years, respect life parish representatives have sent church-goers home with baby bottle “banks” to raise money for the five pregnancy centers located in Miami-Dade and Broward counties. In October 2021, the ministry also partnered with schools to launch its first Baby Bottle Campaign contest, which ran from Oct. 15 through Nov. 15.

Each student received a baby bottle “bank” to take home and fill with loose change, cash, and checks made payable to Respect Life. For convenience, the Respect Life Ministry also provided a flyer with a QR code for online donations.

“The Gospel of Life is for everyone — from the very youngest to the very oldest — and this is a wonderful way to get everyone involved and educated on the sanctity and dignity of all human life, from conception to natural death,” said Rebecca Brady, direct of the Respect Life Ministry, in a letter addressed to each respect life school representative. 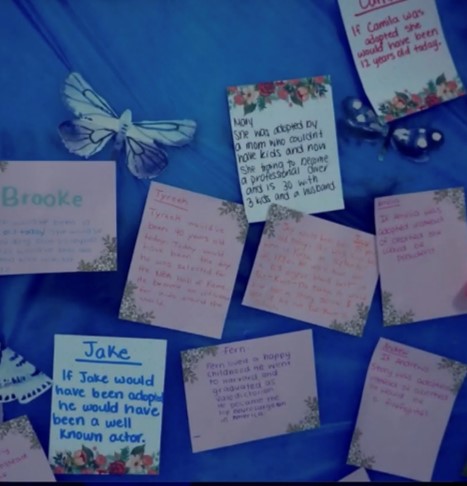 Post-it notes name and describe the would-be life of aborted children if they had been adopted instead. The display marked Archbishop Coleman Carroll High School students' participation in the October 2021 Baby Bottle Campaign to raise funds for the archdiocese's Respect Life Ministry.

Representatives also received a St. Joseph respect life poster to display prominently at the school, and materials to distribute to each class including instructions for teachers, a letter addressed to each parent/guardian, and age-appropriate infographics. Every homeroom teacher also received a St. Joseph prayer card so the classes could pray together each day of the campaign.

“I was very excited to get everyone on board,” Sister Mara said.

Apparently, her enthusiasm was contagious as students approached her to ask if they could also incorporate fundraisers. Seniors sold rubber bracelets at lunchtime, while the junior class made flyers and promoted a dress-down day.

The class that brought in the most donations received a class party. To keep everyone motivated and in the loop, Sister Mara provided real-time updates in $20 increments using an abacus-type system on a community board.

Not only did the baby bottle initiative help teach the importance of respecting life from birth to natural death, the campaign also promoted a sense of school spirit around its Catholic identity, said Carmelite Sister Margaret Ann Laechelin, Archbishop Carroll High’s principal.

Faculty members also stepped up with a door decorating theme that promoted the sanctity of human life. One display used red, pleated paper hearts to illustrate the number of abortions that were performed in 2018, with each heart representing 10,000. Tagged to the display were yellow hearts with eye-opening bits of information: 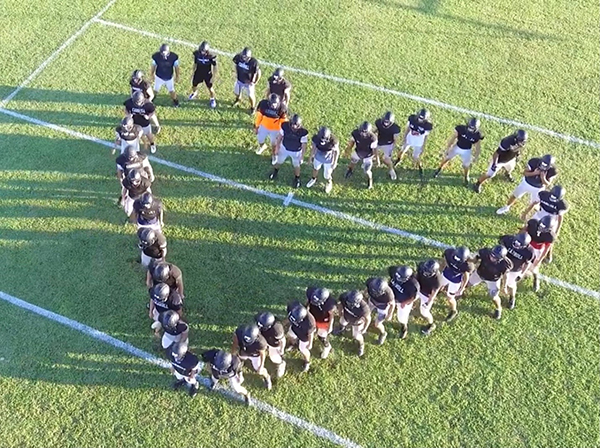 Members of the football team at Archbishop Coleman Carroll High School in Miami pose in the form of a heart as part of the school's participation in the October 2021 Baby Bottle Campaign to raise funds for the archdiocese's Respect Life Ministry.

Another display used post-it notes to name and describe the would-be life of aborted children if they had been adopted instead. For example, “If Jake had been adopted, he would have been a well-known actor.” “Mary was adopted by a mom who couldn’t have kids and now she is trying to become a professional diver and is 30 with 3 kids and a husband.”

“We encouraged students to ask neighbors, family members, and parish members for donations. One student raised over $400 in just one weekend by asking for donations after Mass,” Sister Mara said.

The two classes with the most donations got to visit the South Dade Pregnancy Help Center to deliver the baby bottles and receive a tour.

“One sobering statistic they learned is there are 1,500 abortions that occur per year in Miami,” Sister Mara said. “They were blown away. It’s one thing to hear it, but they had the fetal models they could hold and touch and feel and see.”

In addition, the Respect Life Ministry gifted the school with a 12-week fetal model, and the 10 student representatives in attendance were introduced to the concept of spiritual adoption.

This month, the school is hoping to organize something in conjunction with the March for Life taking place Jan. 20-23.

“We have silent solidarity and offer it to the unborn to be the voice of those who can’t speak for themselves,” Sister Mara said.

“I was gratified to see so many of our schools embrace the Baby Bottle Drive,” said Jim Rigg, superintendent of schools for the archdiocese. “Not only did our students contribute to this effort financially, but the Baby Bottle Drive provided them with a chance to learn more about the sanctity of human life through readings, classroom activities, and discussions. Overall, this was a very successful project in our Catholic schools.”

What the Pregnancy Help Centers offer