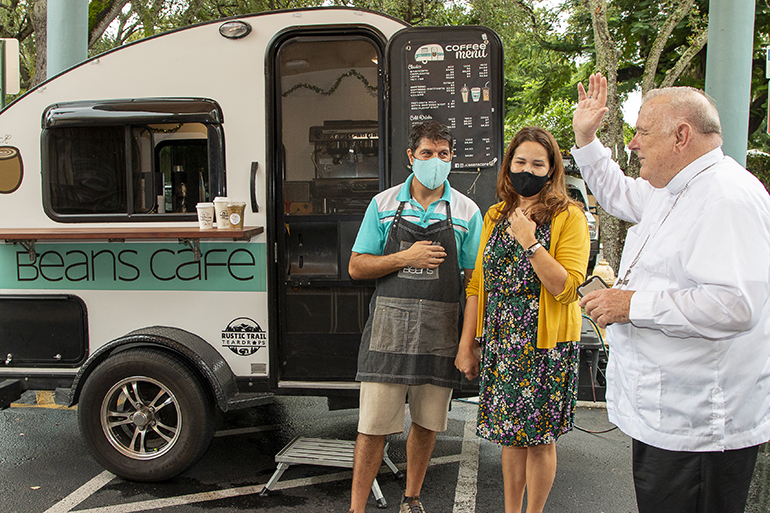 Archbishop Thomas Wenski blesses the family and the business of Demian and Carolina Bowman on Oct. 1, 2021, International Coffee Day. The Bowmans are parishioners at St. Bonaventure in Davie.

MIAMI SHORES | Ever felt like chucking the corporate world and starting your own business?

Demian Bowman did it. The St. Bonaventure parishioner quit his job in corporate finance and turned his passion for people and coffee into JC Beans Mobile Cafe, a tiny trailer where he brews lattes, iced coffees and cortaditos that put smiles on people’s faces. 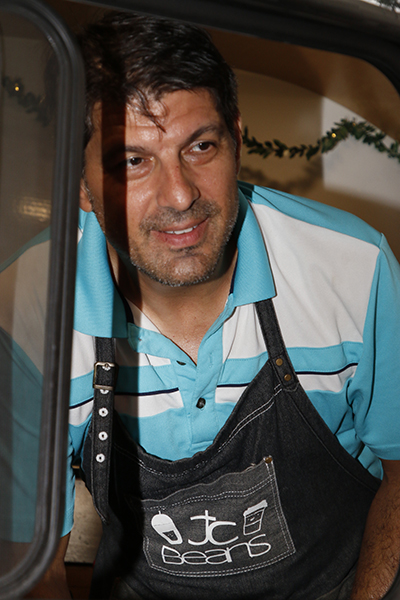 The trailer arrived just as the pandemic began in March of 2020, said Carolina Bowman, his wife of 17 years, who works as a resource teacher and middle-school yearbook advisor at St. Bonaventure School in Davie.

The Bowmans visited the archdiocesan Pastoral Center on International Coffee Day, Oct. 1, at the invitation of the Communications Office. Oct. 1 marks two anniversaries for the Bowmans: On that day in 2012, their 5-year-old daughter, Olivia Grace, born with cerebral palsy, died in her sleep. On that day in 2020, Demian incorporated the business.

“It was like planting a new, happier memory on that day for us,” said Carolina, who took the day off to be at her husband’s side as Archbishop Thomas Wenski blessed them, their family and their business.

She explained that her husband “was sick of being in the four walls (of an office). He really loves talking to people. And coffee just was a passion that was instilled in him by his grandmother years and years ago. So he just combined all those things.”

“So it incorporates all three of us,” Carolina noted.

But there’s more: The J in the logo has a cross on top, so that JC also stands for Jesus Christ.

Demian is a native of Venezuela, Carolina was born in Colombia, though both have lived in the U.S. for decades. She grew up Catholic, he didn’t. But he completed the Rite of Christian Initiation of Adults at St. Bonaventure in 2016.

“He’s just become a very spiritual man,” said his wife. “This has been amazing for him.” 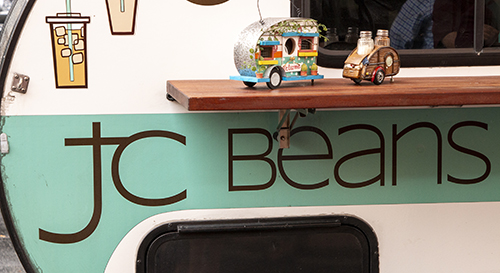 The JC in JC Beans has a cross on top, which stands for Jesus Christ as well as Demian Bowman's daughter, Juliet, 7, and wife, Carolina. "Beans" is the nickname of their other daughter, Sabrina.

Since JC Beans started amid the pandemic, the Bowmans got permission from their homeowners’ association to sell coffee from their driveway. Their business came to the attention of the archdiocese through Martha Velasquez, senior director of special events in the Development Office, which has hired JC Beans on several occasions. Through such word-of-mouth referrals, the business has grown.

Before his midday visit to the archdiocesan Pastoral Center, JC Beans provided the java at a Miami Heat event.

“It’s just unbelievable, in a year and a little bit, he could get this far,” said Carolina as her husband took orders and brewed espressos for Pastoral Center employees. “He has hustled like I’ve never seen before.”

Demian just ordered another trailer, she noted, but that one will serve only at charitable events. JC Beans wants to provide caffeinated breaks for organizations that serve the poor, such as food banks, or the homeless, such as Habitat for Humanity. 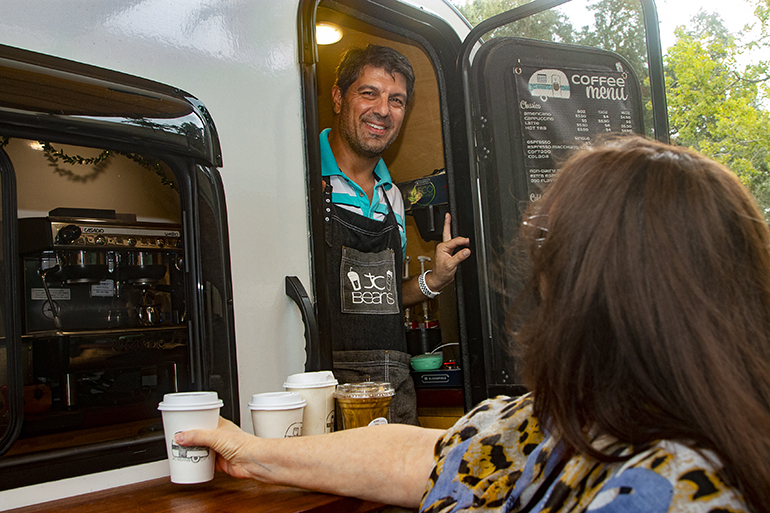