MIAMI | Blending the stories of her parents and grandparents with the story of her high school, an Immaculata-La Salle student has created a documentary film called “This is Our Story” to mark the 60th anniversary of Operation Pedro Pan.

Describing herself as “a proud Cuban-American” in an autobiographical sketch, senior Josephine Novo said she “pounced at the chance” to do a documentary on Operation Pedro Pan and its connection to Immaculata-la Salle.

“Finally, a way for me to bring a piece of our story to life, an opportunity to do justice to an experience that often is not properly or fully portrayed, a way for me to show how deep and widespread the history of one island in the Caribbean can run,” Josephine wrote.

Operation Pedro Pan, a secret collaboration between the U.S. government and the Catholic Church in Miami, spirited more than 14,000 unaccompanied minors to the U.S. between 1960 and 1962. They were cared for in Catholic boarding schools, group and individual foster homes until most were reunited with their parents, often years later. Their parents made that difficult choice to prevent their children from being indoctrinated in an atheist ideology.

“This is our story. One that can never be forgotten,” Josephine wrote. She called the exodus “a true testament of a faith and love that prevails to this day, especially in La Salle’s Salesian community.” 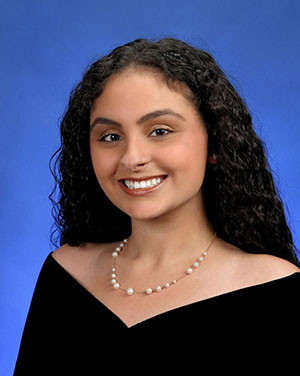 Describing herself as "a proud Cuban-American," Immaculata-La Salle senior Josephine Novo said she “pounced at the chance” to do a documentary on Operation Pedro Pan and its connection to her high school.

Immaculata Academy, a high school for girls, was founded Sept. 1, 1958, staffed by the Sisters of St. Joseph of St. Augustine. When the Fidel Castro regime ordered all religious and private schools closed on the island in May 1961, the De La Salle Christian Brothers were among the religious communities who flew to Miami after being expelled from the island.

That’s when six of their former students, already exiled here, asked Miami’s Bishop Coleman Carroll to help the community establish a school here. La Salle High School for boys opened in September 1961, staffed by the exiled Lasallian Brothers and sharing the grounds with Immaculata Academy. Many of those enrolled at first were Pedro Pan boys under the care of Miami’s Catholic Charities.

The two schools merged in 1970, with the Salesians of Don Bosco assuming leadership in 1985. The Salesian Sisters who now lead the school took over in 1995.

Josephine’s mother, Stefanie Amenedo, graduated from Immaculata-La Salle in 2001, “and growing up I always knew I wanted to be part of that Salesian community,” Josephine wrote. “My time at (Immaculata-La Salle) has only deepened my love and affection, not just to the school itself, but to my faith as a whole; and Operación Pedro Pan is nothing if not one of the grandest shows of faith in the awesome and tremendous power of God the world has ever seen.”

She wrote that she was impressed by the logistics of the operation, the collaboration between the government and the Church, and how the Church cared for those unaccompanied minors “in such a way that many of the remaining former children of the program still have close, intimate relationships.” She called the whole Pedro Pan experience “awe inspiring.”

She also recalled how she grew up hearing the stories of her parents and grandparents, “the suffering of three generations who watched their homes, livelihoods, and entire realities change practically overnight.”

When the communists took over in Cuba, her grandfather lost possession of the bodega his father had started. Both her grandmother and grandfather were forced to work in “concentration camps for three years in order to leave the country legally.” Her father was born into a society where he could not speak freely in his own home.

“All the stories I grew up with,” she wrote, “stories I can never forget, stories that should never be forgotten.”

“I do this for my people, I do this for our history, I do this so that through the years we do not become desensitized to the real pain and suffering Cubans have endured and continue to endure every day; so that our apathy may not overtake us in our walks of life and love,” Josephine wrote. “I refuse to let our story die, I refuse for my grandparents, for my parents, and for the community at large.”

Jay Castaño - 09/29/2021 12:10 AM
I thank you for your very moving work related to the Pedro Pan exodus. I came to Camp Kendall under the supervision of Marist Brothers. When I left the camp and joined my family, I went to LaSalle and graduated in 1966. I have happy memories from those years and thank Msgr Bryan Walsh and the Archdiocese under Bishop Coleman Carrol for their tremendous support and great guidance after such tremendous trauma. My name is Jay Castaño and I’ve been in Washington DC for 44 years. Just retired after being a teacher, Asst Principal and Elementary School Principal in DC PUBLIC SCHOOLS. May God continue to bless you, your parents and grandparents. And please continue to research and publish our story. Sincerely, Jay.

Gabriela Ferrer - 09/22/2021 09:53 AM
Congratulations Josie for a wonderful job. We know your family must be very proud of you. Continue being a good example to the youth of our community. May God always bless you and your family.

Jose Enrique Garcia - 09/21/2021 01:41 PM
Congratulations, Josephine. It is wonderful to see your desire to do good and share of the fine education you received at Immaculata/La Salle. I too went to school at La Salle 60 years ago and I am glad it is still producing fine young people like you. I am a Pedro Pan and loved the film. I live in Texas now and hope the Pedro Pan exhibit at the Museum will still be open next time I visit Miami in March 2022 so I can see it. May God bless you. All the best to you and to your family.