School teaches lessons of good from the bad 9/11 story

Kelsey Sager, a St. Ambrose School social studies teacher, shows off a wall hanging designed by her students as part of school projects to commemorate the 20th anniversary of Sept. 11. All of her students were asked to help with the project that reflected how the country came together during that tragic time.

Eighth-graders at St. Ambrose School share stories of 9/11 during social studies classes Sept. 14, 2021. Many of the students have ties to New York and loved ones who were touched by the tragedy.

St. Ambrose School participated in a donation drive in September as a way to do an act of service in honor of those lost in the Sept. 11 attacks. The donations were given to the Miami Veterans Hospital to be distributed to those who served the country in the various branches of the military.

Fourth-graders pack boxes with donations collected as part of a drive at St. Ambrose School in Deerfield Beach for the observance of the 20th anniversary of the Sept. 11 attacks.

Tara Bartos, a librarian and technology and media specialist at St. Ambrose School, talked with her students about 9/11 and shared stories about her family members in New York at the time.

American flags are displayed on the campus of St. Ambrose School as part of the school's efforts to commemorate and teach about Sept. 11, 2001.

Pieces of art designed by first-graders at St. Ambrose School are displayed around the campus for all to enjoy.The project was part of events the school participated in to reflect on the 20 anniversary of 9/11.

DEERFIELD BEACH | St. Ambrose middle school teacher Kelsey Sager was her students’ age growing up in Wisconsin when the Sept. 11, 2001 terrorist attacks occurred, leaving a lasting impression on her life.

“I was a sixth-grader,” said Sager. “I was waiting for the school bus. It showed up an hour late. When we arrived at school, they were playing a television. We were all thinking this was not a normal day.”

Sept. 11 two decades ago was not a typical day at all. In fact, it was a world-changing moment, and Sager never imagined that one day she would be sharing her experience or teaching her own students about the tragedy she witnessed.

“It had a big impact on me,” she told her eighth-grade social studies class. 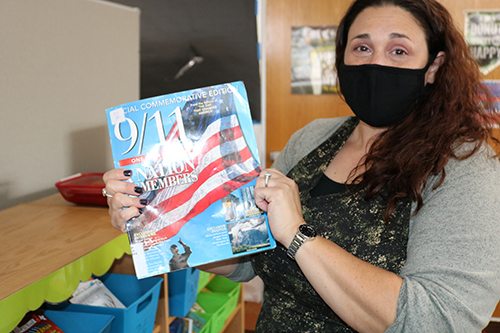 Tara Bartos, a librarian and technology and media specialist at St. Ambrose School, talked with her students about 9/11 and shared stories about her family members in New York at the time.

This being the 20th anniversary of 9/11, schools everywhere held events in memory of the nearly 3,000 people who lost their lives that day. Teachers also presented history lessons about the tragic moments when two planes, flown by terrorists, hit the towers of the World Trade Center in New York. A third flew into the Pentagon, and another crashed into a field in Pennsylvania, killing all on board. The events marked the single largest loss of life from a foreign attack on American soil.

“Data indicates that 30 percent of the population today is under age 24,” Sager said. “This age group did not experience that day. It is important for students to learn about it.”

St. Ambrose organized a week of activities to commemorate the anniversary around the national observance of Patriot Day, which fell on Saturday, Sept. 11. Lesson plans incorporated history of the tragic time, and students also learned about how love of the Lord and service to fellow man came out of the troubling events.

The commemoration began Sept. 8, when St. Ambrose students, faculty and staff gathered for a school Mass with Father James Long Hai Do, parochial vicar, presiding. Prayers went up for all the souls who had died on 9/11, including those who had rushed into danger to help. 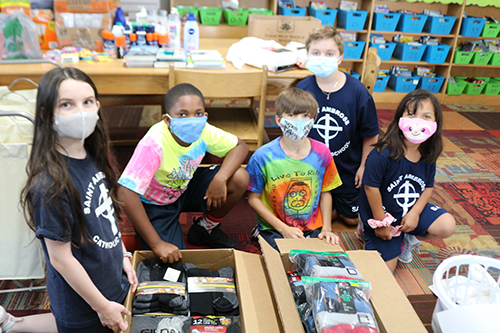 Fourth-graders pack boxes with donations collected as part of a drive at St. Ambrose School in Deerfield Beach for the observance of the 20th anniversary of the Sept. 11 attacks.

One day, everyone was encouraged to wear red, white and blue as a sign of patriotism and respect for the country. The fourth graders placed more than 250 small American flags in different spots around campus. First graders helped by creating colorful pieces of art dedicated to firemen, policemen and other first responders. Their creations were displayed around the school.

The teachers presented various lessons to the younger students about patriotism and acts of kindness through service. Sixth, seventh and eighth graders learned about the hours and events of the historic day.

The older students viewed videos taken Sept. 11 and heard sound clips from the locations of the attacks. They saw the tragedy that unfolded and the firemen, policemen and emergency personnel rushing to help as others ran away from the collapsing buildings, smoke and fires.

“The students asked a lot of questions,” said Tara Bartos, school librarian and technology/media specialist. “One of the questions I heard over and over was, ‘Why did people want to attack America?’ I told them that the United States is a strong country and people wanted to hurt us. People were killed and hurt, but the event also united the country. On Sept. 12, everyone had a flag out. Everyone was singing God Bless America.”

On Sept. 14, eighth graders in Sager’s social studies class shared personal stories from that day, stories taken from conversations they had heard around the dinner tables and at get-togethers over the years from family members.

“My dad was young and lived in New York,” said Aliyah Willis. “He was at school when it happened. When he looked out the window, he saw smoke. He said it was scary.”

“My mom was in high school in New York,” said Finnbarr Burns, anxious to tell his story. “She could see the smoke. Her best friend was in one of the towers. My mom had talked to her on the phone. Her friend didn’t make it out.”

Discussions shifted to the changes made after 9/11 that are still being felt today.

Students were amazed that back then, there was no security screening or body and luggage scans at airports. Security continues to increase at airports, businesses and schools today. Surveillance and monitoring began to be used everywhere. New phrases entered the lexicon, including “war on terror” and “never forget.”

Bartos’ own brother and uncle were living and working in New York at that time. The morning of the attacks, the family lost communications with them. “We were so worried,” she said. “It was the waiting. We finally heard from them, and they were okay.”

She said it was important to teach her students about the acts of goodness that followed the tragic attacks and shine a light on people who stepped up with a helping hand during dark times. She explained that it was a period when the country came together, heroes responded with acts of bravery and love, and people from all walks of life felt called to perform acts of service.

“I tell the students that everyone can help others. During 9/11 everybody stepped up to help. Everyday people became heroes,” Bartos said.

She organized a donation drive as part of the school events. Members of the school family collected items such as books, socks, snacks, personal care products, gift cards and t-shirts. The items are being given to Miami Veterans Hospital to be distributed to local veterans.

“The drive was about honoring those we lost by doing an act of service,” Bartos said.

Students were also encouraged to perform their own acts of service through community projects. The youngsters came up with an array of ideas including picking up trash from the beach, fundraising to benefit local outreach organizations and doing little acts of kindness for those around them. 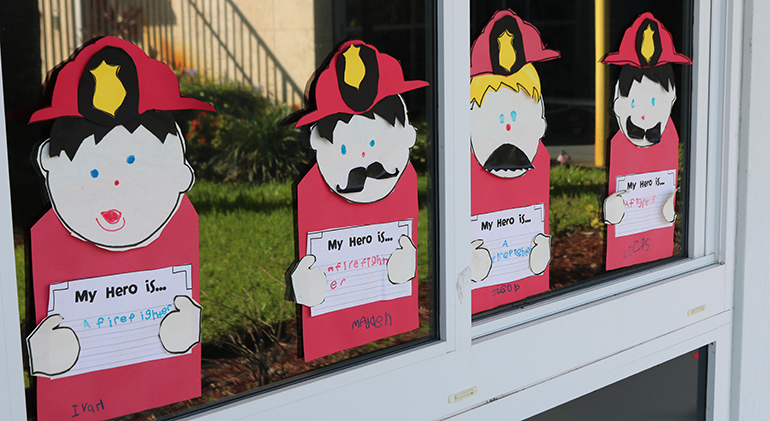 Pieces of art designed by first-graders at St. Ambrose School are displayed around the campus for all to enjoy.The project was part of events the school participated in to reflect on the 20 anniversary of 9/11.