To be 'the presence of God' amid the rubble 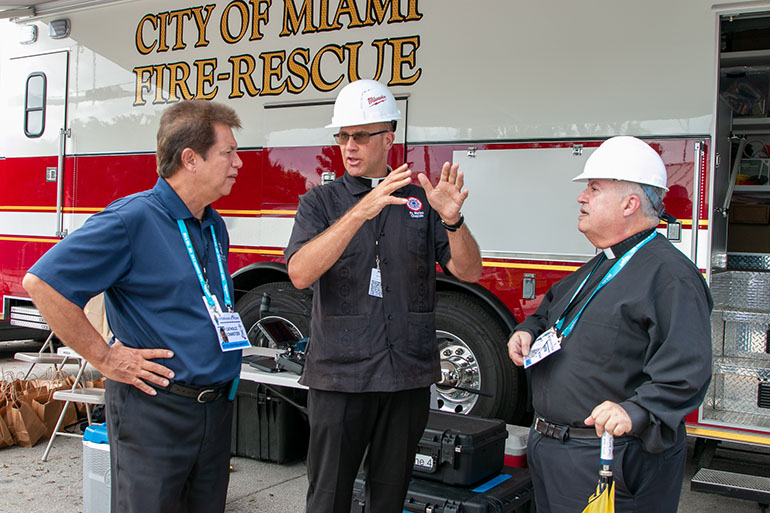 SURFSIDE | Father Christopher Marino says he had never lived a moment like that.

A chaplain for the City of Miami Fire Rescue for four years now, the rector of St. Mary Cathedral was at the site of the Champlain Towers South collapse July 1 when search and rescue crews located the 7-year-old daughter of a Miami firefighter.—

Working atop the rubble that day, just as they had every day since the 12-story building toppled without warning June 24, were search and rescue crews from around the U.S. and Israel as well as representatives of Hatzalah (“rescue” or “relief” in Hebrew), a volunteer emergency medical service organization serving Jewish communities around the world. 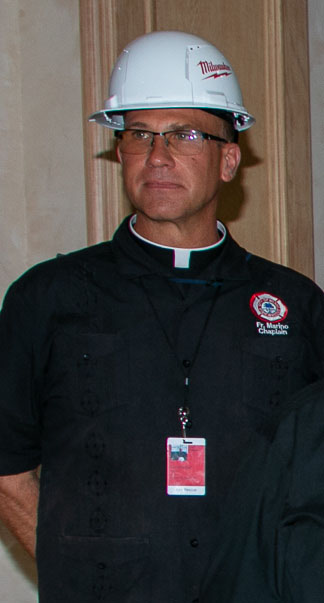 Father Christopher Marino is pictured during a visit to the site of the partially collapsed Champlain Towers South on July 2, 2021.

Members of FEMA’s Urban Search and Rescue Florida Task Force 2 found the little girl’s body. They called her father, who was waiting nearby. He came with his brother, also a Miami firefighter. Father Marino said the rescue crews  — about 200 strong — briefly stopped their work, stood in total silence, and saluted as her father and uncle carried Stella Cattarossi away.

At that moment, differences in religion, culture, language and background gave way to a common humanity – and sorrow.

“They were mourning with their brothers. I’ve never experienced that,” Father Marino said. “It was extraordinary.”

The work of search and rescue teams, especially in disasters such as this one, is difficult, to put it mildly. Since the collapse, more than 400 men and women have been working round-the-clock, under blazing sun, drizzling rain, even a couple of wind-driven downpours courtesy of tropical storm Elsa’s brush past South Florida. The crews take turns resting in trailers and tents set up nearby.

As of July 11, they had removed more than 14 million pounds of concrete and debris from the site, according to Miami-Dade County Mayor Daniella Levine Cava. For 14 days, from a few hours after the collapse until the rescue turned into a recovery at midnight July 8, they had found no one alive. At that point, the death toll stood at 54 with 86 people still missing. By July 11, the death toll had risen to 90 with possibly 31 still missing.

“It’s hard work. Prayer is what gets us through it,” said Capt. Omar Blanco of Miami-Dade Fire Rescue and FEMA’s Florida Task Force 1.

Blanco is a member of St. John Neumann Parish in Miami and its LEAF (Law Enforcement and Firefighters) Emmaus group. When he spoke to the Florida Catholic July 2, he mentioned someone had sent him a text message that morning with the passage from Exodus 14:14: “The Lord will fight for you; you need only to be still.”

“We have to stay focused on this job and make sure we do what God has put us here to do,” Blanco said.

Father Marino has been at the site every day since the afternoon of the collapse. His role, he said via email, “is to be actively present to our personnel as a ‘Father’ and spiritual companion. Some of our folks aren’t exactly sure what a Catholic priest is but most appreciate the fact that I ‘represent’ the ‘presence of God’ (though they are keenly aware that I myself am NOT God!).”

Over the years, he said, he has regularly visited the fire stations “just to hang around, go on calls” and get to know the crews. This has given him “a certain ‘access’ to hearts and lives. I have baptized many of their children, presided over weddings and buried members of their families.”

Since the collapse, he said, “I have lived this companionship in an intense way. I’ve had the privilege to be right there with them at the rubble and on breaks. We listen to each other, pray together at times. I try to help them — even as I struggle — to see beyond the broken buildings and bodies, appreciate their blessings, skills and families in a new way.”

Right now, “just a hug can be the ‘presence of God,’” Father Marino noted. “For me, it’s been an extraordinary privilege.”

In addition to Father Christopher Marino, three deacons and two priests who work as volunteer chaplains have been present at the site of the collapse: