More than 1,000 Knights and family members hear from Florida's bishops and governor 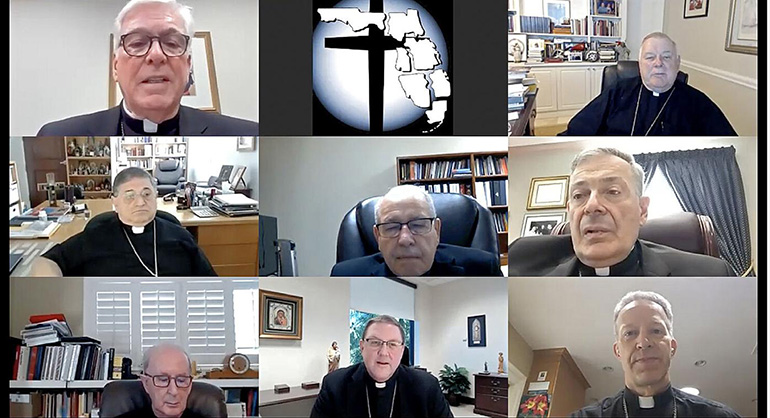 ORLANDO | Florida's councils of the Knights of Columbus — the largest Catholic fraternal order with over two million members in the United States and nearly a dozen foreign countries — gathered May 28-30, 2021, in person for its annual convention.

The convention was preceded by the state council's first-ever Ride for Vocations, where Miami Archbishop Thomas Wenski joined Knights on motorcycles for a fundraiser benefiting Florida seminarians. After morning Mass, the crew hopped on their bikes and rode from Weston to Kissimmee along Florida’s U.S Route 27. The ride raised money for the Mary Beth O'Connor Holy Angels Memorial Fund for Vocations, which was set up by the Knights' state deputy, Scott O'Connor, in honor of his wife, who died in January 2020. 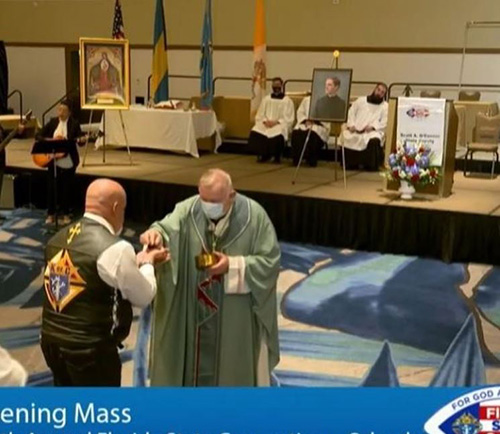 Archbishop Thomas Wenski distributes Communion while celebrating the opening Mass, May 28, 2021, at the state convention of Knights of Columbus in Orlando. The day before, he joined almost 30 Knights on Bikes on a ride from Weston to Kississime to promote vocations on the way to the convention.

Archbishop Wenski also celebrated the opening Mass at the convention, May 28, which was held at the Hyatt Regency in Orlando. The following morning, Bishop Frank J. Dewane of Venice celebrated a memorial Mass with the Knights.

Later that evening, Florida Gov. Ron DeSantis addressed the 117th annual convention. The governor spoke to the nearly 1,000 Knights and family members at the annual awards banquet where honors were announced for the Family of the Year, Councils of the Year, and the Knight of the Year.

Antonio and Maria Pagan of the Monsignor Bishop Council 2112 in Orlando received the Family of the Year award. Antonio serves as president of the pastoral council at St. Joseph Parish in Orlando, and Maria serves as secretary of the council.

The Councils of the Year, in their respective divisions, were: Division 1 winner, St. Thomas A Becket Council 16236 of Orlando; Division 2, San Patricio Council 13654 of Miami Beach; and Division 3, Our Lady of Hope Council 8086 of Port Orange.

The Knights support countless causes, programs, and Catholic parishes all over the world and local communities. Included among the Knights’ higher profile charitable causes are Special Olympics, American Wheelchair Mission, Citizens with Disabilities, Habitat for Humanity and support to Veterans. The Knights also contribute thousands of dollars annually to support seminarians studying for the priesthood and numerous parish programs. There are more than 55,000 members of the order in Florida.

During the convention, the state’s archbishop and seven bishops simultaneously and virtually participated in the Knights of Columbus convention via Zoom. The episcopal shepherds all thanked the Knights for constantly advocating for a moral framework of preserving a culture of life from conception to death. They praised the Knights for their constant efforts to provide ultrasound machines for pregnancy care programs and centers. They also used their platform to encourage the Knights to be on the forefront of repealing the use of the death penalty in Florida.

On May 29, 2021, Bishop Frank J. Dewane of Venice, center, celebrated a memorial Mass with the Knights at the Hyatt Regency Ballroom. Joining him for the celebration were Orlando priests Fathers Tim Cummings, far left, and Father Robert Kantor, far right, who both serve as chaplains of diocesan councils, and Msgr. Thomas Skindeleski, state chaplain for the Florida Knights of Columbus.