'These girls are on fire!' 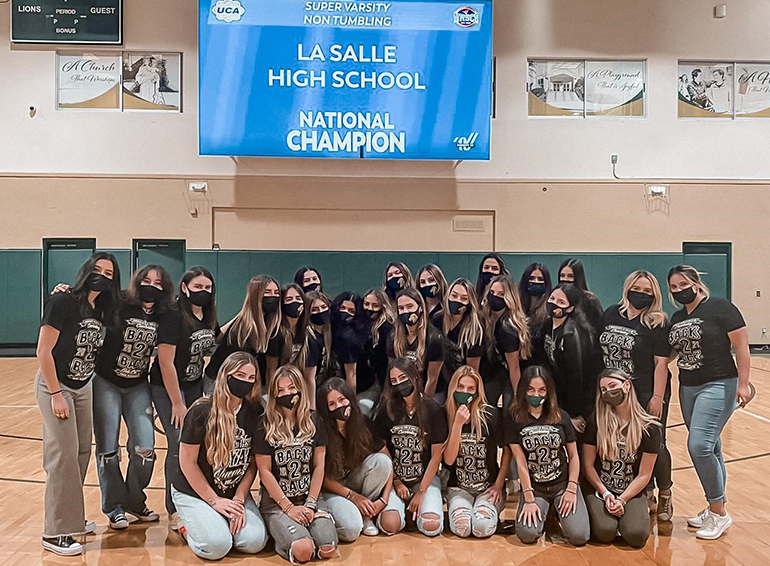 Immaculata-La Salle cheerleaders pose after getting the news they had won the national championship in Super Varsity Non-Tumbling, April 23, 2021. They also won back-to-back Florida state championships. Due to COVID-19, the national competition took place virtually this year.

Captains Sofia Penas, Ana Victoria Salazar, Maria Castro spurred the Royal Lions to beef up their routine. When they recorded and submitted their video to the UCA National High School Nationals on April 17, they were certain they did their best.

The Royal Lions found out April 23 that they won the championship of the Virtual Super Varsity Non-Tumbling division. Their total of 75.2 beat Rosemount’s 65.25. That was a sizable climb from last year’s 10th-place finish.

The team used a senior night setting March 19 in front of family and friends to record their semifinal routine. They ran their routine three times, but Buxeda felt they could do better. Since they had the time before the March 20 submission deadline, they came back Saturday morning and ran the routine seven times for recording.

“We thought this was harder than going to compete in person, because of them having no crowd, having no pressure,” Buxeda said. “We’re at home. It’s like practicing. The kids don’t have adrenaline as if they were going out on the stage.”

Salazar admitted the athletes were emotional at senior night. Sub-par performances resulted. She said they also wanted to redo the recording. “I’m glad we were able to do that,” Salazar said. “It came from energy from everyone on the team and us wanting to do it for each other.”

ROUTINE’S DIFFICULT; SO IS THE ADVERSITY

In previous years, the team would have maybe a couple of weeks at most between state and nationals. Buxeda and the Royal Lions took advantage of the three-month break to boost their routine. Buxeda said she wanted to increase the difficulty to stand a better chance at nationals.

However, Buxeda also said the team had another bout with COVID-19 after they returned from states. The Royal Lions lost 5 to 6 athletes to a two-week quarantine, which eventually led to a one-month quarantine for other cheerleaders.

After a few others left the team after states, that forced the Royal Lions to reconfigure the routine. Buxeda said the team upped the difficulty in their opening pyramid because of having to replace athletes. They also did a more difficult dismount on their first stunt.

Junior backspot Ivana Major said the team was also on a high after repeating as state champions. She said the athletes struggled to regain their work ethic until the coaches reminded them of their new goal.

“At this point in the season, everyone’s super overwhelmed. I get that,” Major said. “The girls were saying it’s unacceptable. How do you call yourselves state champions and not be able to hit the routine? When I got upset, I always told them, ‘Don’t settle.’”

Salazar said the cheerleaders took the onus to put in the work. She said the Royal Lions — especially those who battled COVID — had to regain their strength and stamina to handle the increased difficulty. “We kept saying, let’s go again until we win,” Salazar said. “We ended up getting our perfect routine.”

THE STORY BEHIND THE STORY

The senior night also gave the team’s nine seniors one last chance to compete with their teammates. They decided to share some of the traditions of the team — in particular, singing songs.

Salazar pointed especially to Alicia Keys’ “That Girl is On Fire” as a song that propelled the team. She said the team sings it before every performance. “The song’s about strength in women and empowering them,” Salazar said. “It always ended up playing before we compete at states. We don’t know how it came about; it’s by chance. But we sing it together. It brings up energy on the team.”

The national championship capped a record-setting senior class for Immaculata-La Salle cheerleading. Maria Castro, a senior flyer who was a first-year captain, said the team came a long way in four years — from barely making the state meet as freshmen to winning nationals as seniors.

Buxeda said this year’s seniors started the same year she came to ILS. That journey makes the accomplishments that much sweeter for the seniors.

“That’s something I’ll take into the rest of my life,” Castro said. “It shows how hard work and dedication will lead to your goals at the end of the day.”

Buxeda, however, issued a challenge for sophomore and junior classes she called the hardest-working classes on the team. She wants the returnees to have the mindset of going for titles Nos. 3 and 4. She especially wants the sophomore class to leave with four state-championship titles.

Major, who has been in a lead-by-example role with the team the last two years, will compete for a captain role. She learned from the captains to develop respect and treat all teammates evenly.

“That’s the way I see it: We’re a team,” Major said. “We have to work together. The weakest link on the team is as good as we’re going to be.”