After the pandemic: Encourage our people to 'look toward the heights'

Archbishop Thomas Wenski delivered this talk to more than 400 people gathered via Zoom July 20, 2020, for an international conference put on by the Academy of Catholic Leaders of Latin America. He spoke alongside Bishop Mario Moronta, vice-president of the Venezuelan bishops' conference. The topic of the conference: Challenges facing the Church after the worldwide pandemic: The view from Venezuela and the U.S.

First, we must live the “present” of the pandemic and how we succeed in living this “present” will determine how we will live in the “aftermath” of the pandemic. Pope Francis — with great wisdom and intuition — has already said in various discourses that our times are not such much an era of change but the change of an era.

One of the signs of the times is that all our societal institutions have been called into question. Certainly, in recent years, these institutions have been undermined to one extent or another because of corruption and greed and because of the abuse of authority and power. Positions of service are turned into instruments of personal gain. We see this in politics, we see this in academia, in the media, in the entertainment world, and in business. Tragically, we have also seen this in the Church. 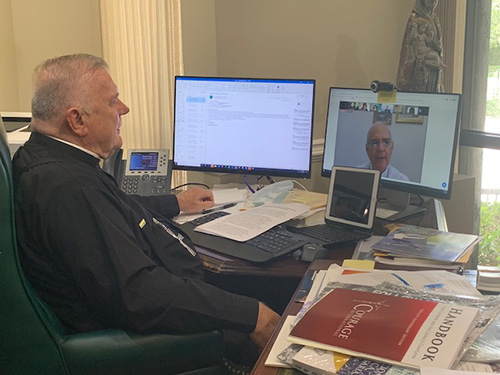 Archbishop Thomas Wenski listens via Zoom to Bishop Mario Moronta of Venezuela during the international conference put on by the Academy of Catholic Leaders of Latin America in which he participated July 20, 2020. The theme of the conference was "Challenges facing the Church after the worldwide pandemic: The view from Venezuela and the U.S."

And so, we are facing a situation that is very precarious and difficult. And the pandemic is an aspect of a triple crisis: a global health crisis brought about by COVID-19, a disastrous economic crisis and a societal crisis as we have seen in the disturbances in U.S. cities, but also in France with Paris’ “yellow vests” movement, not to mention the events in Chile a few months ago.

The world’s elites have betrayed us — for example, in the U.S., we invested resources in the war against terrorism, but we did not know enough to invest the necessary resources in preventing microbiological enemies — despite our being forewarned. Our countries no longer trust the leadership of those who govern them — the gaps among social classes grows larger every day. Populism is a manifestation of this loss of confidence and it continues damaging the social fabric that makes possible our living together as members of society.

The consequences will be serious and we still can’t see clearly what they might be. In the last century, during the 1930s, the economic Depression bequeathed us isolationism, protectionism, nationalism, fascism, etc., which brought us into World War II. The pandemic, intertwined with economic disaster and social unrest, is not going to solve itself in a few months. It will take years. In the meantime, our countries run the risk of turning in on themselves even more. “The globalization of indifference,” to quote Pope Bergoglio, continues to grow even as globalization or mundialization is ever more stagnant and paralyzed.

In other eras, the world endured pandemics of one type or another. We only have to avert to the disappearance of many of the original populations of this continent due to the diseases introduced to these shores by Europeans. In Europe, the plague of the 14th Century produced grave consequences even in the religious sensibilities of people. There emerged apocalyptic visions, cults, new religions which reflected the anxieties of the people in the midst of prolonged hardships. We could even say that the ideologies of the 20th Century had a “religious” character about them. And today, in the Middle East, populations feeling themselves powerless with no possibility of protagonism were seduced by conspiracy theories represented by politicized Islamism.

We don’t have a crystal ball to predict what will be the consequences that are going to challenge us as Church in the aftermath of “the pandemic at the change of an era” that we are experiencing. However, the hardships which our people are suffering are the raw material which the demagogues of the 21st will easily exploit. My brother bishop from Venezuela could talk about this with perhaps more sagacity than I.

So, how to focus on this challenging situation from the “perspective of hope? In a certain sense, we are “putting out into the deep” in unknown waters. If our countries are beaten down and agonizing it is because they feel “set adrift” without a rudder. As I said already, it is because our elites have failed us. Our institutions have been undermined by corruption and greed. There is no leadership to inspire trust.

Today's Latin America is marked by growing uncertainty and a sense of hopelessness. For many, especially young people, hope is defined as "leaving." But that escape valve has become more difficult with existing migration policies. Where to find a roadmap? Not to leave, but to stay and build in their own lands a future of hope.

America, a land of promise and opportunity for many from Latin America and elsewhere, is also experiencing a confusing and uncertain situation. Of course, the United States is at its best when the rights of the weak and vulnerable are protected, and not seen as expendable. However, we are far from this when, in some cities, more than half of pregnancies end in abortion; and when economic and social forces discourage young people from committing to marriage, so necessary for the development of children (consider, for example, the current housing crisis). We are far from our best when public schools in many parts of our country fail to educate children at grade level.

We are far from our best when the middle class is disappearing, especially in "flyover" states, where suicide and drug addiction constitute a health crisis that predates the coronavirus pandemic.

Perhaps, you may find this analysis of "the present" too pessimistic. Well, I always say that optimism is more of a secularist "value" that sometimes becomes a progressive’s illusion. Instead, hope is a theological virtue. And as Christians we are neither optimistic nor pessimistic. We are to be realistic with our feet on the ground, but at the same time with our eyes fixed on God who is always for us the God of History, the God who does not disappoint. And so, it up to us to be men and women of hope. We must be missionary disciples of Jesus Christ, who is Hope incarnate. Thus, this "present" is going to define the course we're going to take to "the aftermath" of the pandemic.

Thus, we find ourselves in a Church that with her lights and shadows continues to walk with the peoples of our America, announcing Jesus Christ so that in Him we may have life. And to speak of "America," I speak in the sense of Pope John Paul II, when he convoked the Synod for America. In other words, the American continent encompasses the entire territory from the North Pole to the Tierra del Fuego. It is to be hoped that this pandemic will cause us to be more humble – that, despite our technologies, we are not the masters of our destinies as we sometimes pretend to believe. And without humility, we cannot evangelize nor be evangelized. I recommend that we relaunch the ‘continental mission’ called for by Aparecida, and do so with the confidence that our peoples remain a fertile soil in which to sow the good news of the Kingdom of God.

The bishops of Latin America — in their final document of Aparecida — tell us, quoting the Holy Father, Pope Benedict XVI: "A Catholic faith reduced to baggage, to a mold of some rules and prohibitions, to fragmented practices of devotion, to selective and partial adherences to the truths of the faith, to occasional participation in some sacraments, to the repetition of doctrinal principles, to soft or crunchy moralisms that do not convert the lives of the baptized, will not resist the onslaught of time. Our greatest threat is the gray pragmatism of the daily life of the Church in which apparently everything proceeds normally, but in reality faith is wearing out and degenerating into pettiness."

The pandemic, and with it we have to add also the related socio-economic crisis, has given us a strong shock that can break already too sclerotic schemes and thus create conditions for structural reforms that finally breaks the "grey pragmatism" that paralyzes us as a Church in the pastoral and social fields.

As the Cardinal of Havana, Jaime Ortega of happy memory, said 10 years ago in his speech at the civic ceremony when a new seminary was inaugurated in Cuba, the first religious building built in Cuba since the triumph of the revolution : "... it is faith in God, or the suspected or certain presence of God on the horizon of our lives, that guarantees values in society, that supports the virtues of the human being in his family and social life, that underpins the spirituality of the people. It is by looking up towards the heights men and women go beyond the grind of their daily lives and are able to overcome crises, to avoid grudges, to love and to forgive."

The pandemic has brought to light the inability and weaknesses of existing institutions. The gap between the poor and the elites is clearer; the pandemic highlights that the idols of the now disappearing era have feet of clay, be it the idol of selfishness represented by neoliberal ideology, be it the idol of hatred represented by socialist Marxist ideology. Perhaps, the pandemic in its "present" and in its "aftermath" challenges us to discover in the resilience of our peoples a new solidarity illuminated by the values of the Gospel.

The years to come are not going to be easy. The normality we experienced before the arrival of the coronavirus is not coming back. The new normal is yet to be constructed — and the Church, as God's pilgrim people, has to accompany our peoples by encouraging them to look "towards the heights." As Cardinal Ortega also said in that address at the new seminary in Havana 10 years ago: "'From the abundance of the heart speaks the mouth' and the men and women around us, whether adults or young people, are awaiting from us a word that opens up for them the deep realities of the spirit. In short, the priest and the seminarian, in one way or another, must speak of God to his people."

This also applies to the laity of course.

How often in the history of the world has the dragon of Revelation (cf. Revelation 12:1-18) in its various incarnations wanted to devour the Bride of Christ? However, it is the dragon that ultimately ends up defeated because love always triumphs, for love is more powerful than hatred. As Pope Benedict XVI said: "... In all times the Church, God's people, also lives by the light of God and — as the Gospel says — feeds on God. Thus, the Church, suffering, in all tribulations, in all situations of the various ages, in the different parts of the world, overcomes. She is the presence, the guarantee of God's love against all ideologies of hatred and selfishness." (Aug. 15, 2007).

In other words, as St. Teresa of Avila, a doctor of the Church, once said: "Nada te turbe; nade te espante, solo Dios basta." (Let nothing disturb you, let nothing frighten you, only God is enough.)