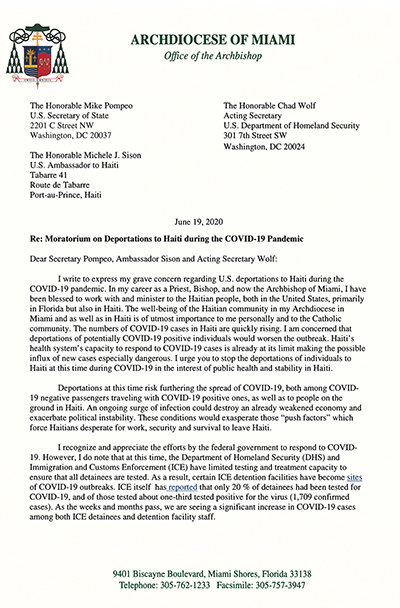 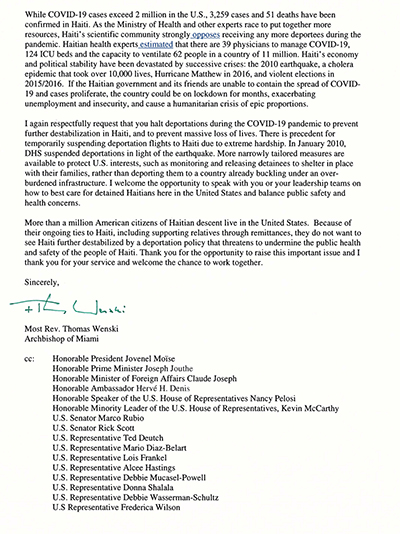 MIAMI | Warning about the danger of further spreading the COVID-19 pandemic into a fragile Caribbean nation, Miami Archbishop Thomas Wenski has added his voice to a chorus of leaders asking the Trump administration to halt deportations of Haitians.

Writing June 19, 2020 to U.S. Secretary of State Mike Pompeo, as well as to the acting secretary of the Department of Homeland Security, Chad Wolf, and the U.S. ambassador to Haiti, Michele Sison, Archbishop Wenski expressed his concern that deporting Haitians at this time risks furthering the spread of the disease and could "cause a humanitarian crisis of epic proportions." (Read the entire letter here.)

“I am concerned that the deportations of potentially COVID-19 positive individuals would worsen the outbreak,” the archbishop wrote. “Haiti’s health system’s capacity to respond to COVID-19 cases is already at its limit, making the possible influx of new cases especially dangerous. I urge you to stop the deportations of individuals to Haiti at this time during COVID-19 in the interest of public health and stability in Haiti.”

Noting his long years of ministry among Haitians, primarily in Florida but also in Haiti, Archbishop Wenski wrote that the well-being of Haiti is of utmost importance to both himself and the wider Catholic community.

“An ongoing surge of infection could destroy an already weakened economy and exacerbate political instability,” Archbishop Wenski wrote, adding that these conditions would exacerbate the push factors that force Haitians desperate for work, security and survival to leave Haiti.

As of June 23, 2020, there were 5,211 confirmed cases of COVID-19 in Haiti and 88 reported deaths, according to an online tracker maintained by Johns Hopkins University. At the same time, the United States’ own pandemic statistics are among the highest in the world, suggesting the obvious hazard of deporting anyone from the U.S. to Haiti.

Underscoring the peril, Archbishop Wenski pointed out that, due to limited testing capacity, the Department of Homeland Security and Immigration and Customs Enforcement cannot ensure that all detainees are tested.

“As a result, certain ICE detention facilities have become sites of COVID-19 outbreaks," Archbishop Wenski wrote. “As the weeks and months pass, we are seeing a significant increase in COVID-19 cases among both ICE detainees and detention facility staff.”

Several Catholic missionary organizations, along with representatives of Catholic Relief Services, also expressed alarm in recent months at the prospect of an uncontrollable outbreak of COVID-19 in Haiti.

Haitian health experts estimated that the country, with 11 million people, has only 39 physicians to manage COVID-19, 124 ICU beds and the capacity to ventilate 62 people. And Haiti is already wracked with the memory of the 2010 earthquake, a deadly cholera epidemic, Hurricane Matthew in 2016 and political and election upheaval in recent years, Archbishop Wesnki observed.

“There is precedent for temporarily suspending deportation flights to Haiti due to extreme hardship,” the archbishop wrote, noting the suspension after the 2010 earthquake. “More narrowly tailored measures are available to protect U.S. interests, such as monitoring and releasing detainees to shelter in place with their families, rather than deporting them to a country already buckling under an over-burdened system.”

Alice Blanchet - 06/30/2020 10:45 AM
Thank you Archbishop Wenski for your continued support to Haiti and the Haitien Community in Miami/Florida. God Bless