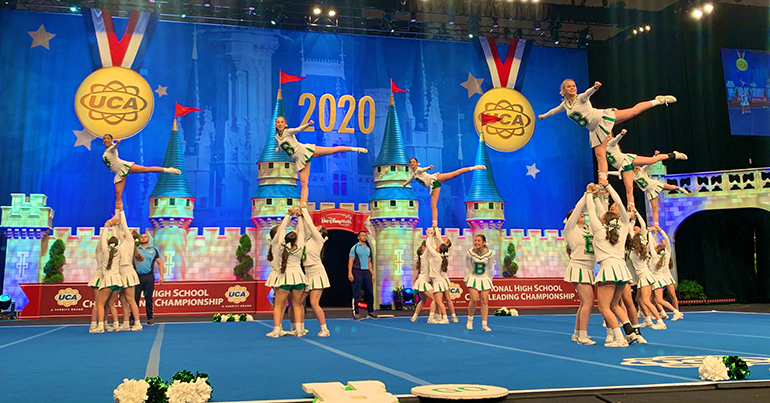 MIAMI | The Original Group of four seniors had graduated, but they did not take the St. Brendan cheerleading expectations with them. The Sabres still expected to win their fifth state championship in a row — and they did just that Feb. 1.

Despite injuries, Jacqueline de Paz and Amelie Cabrera led the Sabres to an 83.0-80.5 win against rival Doral Academy in the Class 1A extra-large division. The Sabres won that division, which comprises teams with 21-30 athletes, with a clean routine. They also improved at nationals, taking fourth in their division.

St. Brendan was the only team in the Class 1A extra-large division to advance straight to the state finals out of region, while the other teams had to compete in the semifinals. St. Brendan coach Arlenee Suarez said that teams do benefit from qualifying straight to finals, but that semifinal teams get an edge in shaking the jitters.

De Paz and Cabrera both admitted that expectations provided even more pressure than the competition. Cabrera said her challenge is to not show that nervousness.

Freshman Lissette Santana said the nervousness didn’t hit her until the Sabres got backstage. Then her heart started racing, because she didn’t want to let down coaches and teammates. “When we went on the floor, I had to tell myself a million times to trust my training and that everything in practice will pay off. When we hit the routine, the hard work paid off. It was all worth it.”

That work carried the Sabres to a fourth-place finish at the Universal Cheerleaders Association’s High School Nationals Feb. 8 at Walt Disney World in Lake Buena Vista. De Paz said that the quick turnaround – nationals followed one week after states – led to a rough first practice. But they returned to form in time for the semifinals.

De Paz said the semifinal performance wasn’t St. Brendan’s best, but the Sabres still earned a berth to the finals. “When we got to the final, we left it all on the mat,” de Paz said. “I said, ‘Guys, this is the last time we’re competing as a whole.’” 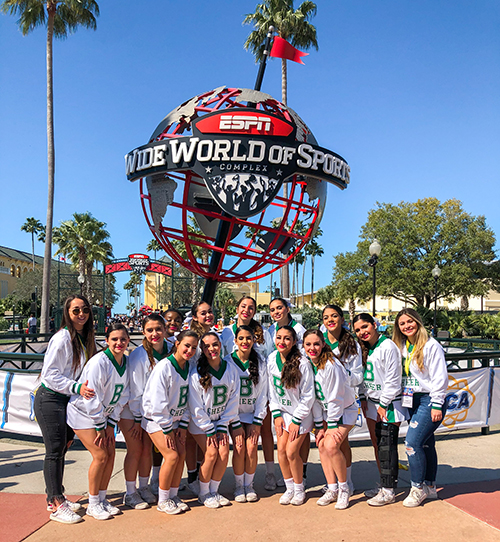 Suarez said the Sabres finished nine-tenths of a point out of third place. She lauded her team for competing in the Super Bowl of cheerleading against programs that were more established.

“We were excited. It’s hard to get top 4 at nationals,” de Paz said.

The team accomplished all these results despite adversity. St. Brendan flyer Kaitlyn Bernal fell and hurt her shoulder around Christmas and was out for the rest of the season. As a result, her stunt group was moved to alternate.

“No one could do the things she did, but she was a trouper,” Suarez said. “She was one of our superstar freshmen. She was with us every step of the way.”

De Paz and Cabrera had the benefit of leading a team that featured eight seniors. Suarez said that the five freshmen the Sabres added also were highly skilled. Three of the freshmen were flyers (ones at the top of the formations), one base and one backspot.

She said that the team united very quickly, which set the foundation for more difficult skills. Suarez said the Sabres tried to beef up their elite stunt sequences by setting every skill at the Super Elite level – skills that would garner the most points.

To pull those off, de Paz said the Sabres had to unite. Of course, long practice hours will do that. But the seniors tried to build that camaraderie especially during the summer break.

“I’d take three to four girls to practice in my car,” de Paz said. “It was a big help to their parents, but it also helps the girls. When you get to your last year, you have to help the younger ones. I helped them with homework, life lessons. The seniors did a great job bonding with the team.”

Suarez also lauded the work her cheerleading squad put in both in practice and in school. She said that a lot of her team is part of St. Brendan’s Academies program, which involves specialized curriculums. Those who enter the medical academy would take a class load heavy on sciences. Performing Arts academy students would take more arts.

They also have to juggle in practices that run from 3:30 to 6 p.m. daily plus weekends. She said the athletes’ accountability assures they excel in the classroom.

De Paz said she is pointing toward pre-med, starting with her basics at Miami-Dade College. Cabrera said that academics also helps in cheer. “In cheerleading, you learn more than cheerleading; you learn science and physics,” she said. “When I think about academics, in that 2 minutes, 30 seconds, every grip has to be memorized. That’s boosted my ability to memorize vocabulary. With math problems, I think about how I can do this in cheerleading.”

The cheerleaders also called varsity coaches Cecilia Esteban and Victoria Salazar and JV coaches Ana Fernandez and Veronica Salazar great role models. De Paz said the coaches built a family atmosphere. Esteban had a baby this year, and she’d bring her son, K.J., to practices. That was not lost on the athletes.

“They are dedicated young women who want to see us do well,” de Paz said. “They are great role models. They teach us what we should be when we grow up – devoted to job, God and family. Make everything about family. At the end of the day, if it’s working, it’s because everything is family oriented. Make sure you like what you do. Bring faith into what you do. God is everything.”

As Cabrera moves into the captain role, she and the Sabres now face the challenge of leading the team to a sixth consecutive state title. She admits she may have to take a more vocal role, but she also said she would rely on her fellow seniors.

“I hope to lead them to a sixth state title and hopefully a better place in nationals,” Cabrera said. “Everyone has to be pumped up ready to work.”

But Suarez said the pipeline is well-primed. The JV finished fourth at nationals as well. They hope to continue building on the Sabres’ tradition. Those who provided the foundation for today’s champs will support them.

“When the seniors leave, they’ll still be there,” de Paz said. “It’s not like I’m leaving. It’s forever. I’ll always be a fan of St. Brendan cheer.” 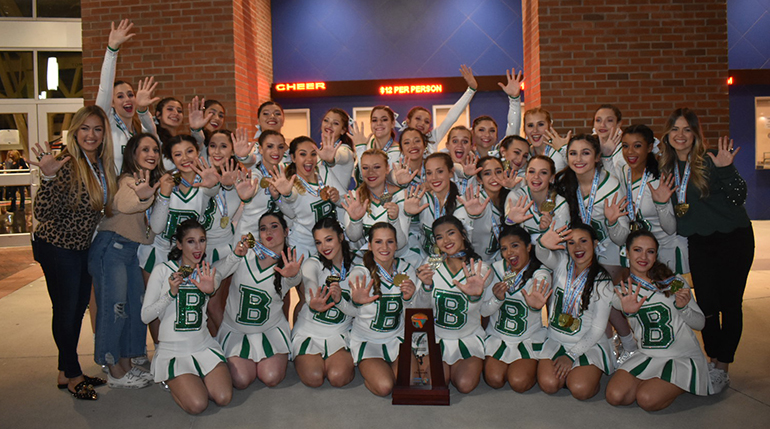 St. Brendan Sabres give the "five" sign after winning their fifth consecutive state title in competitive cheerleading Feb. 1, 2020, in the Class 1A extra-large varsity division.

Wednesday, 19 Feb 2020
Strive for a faith that sees clearly