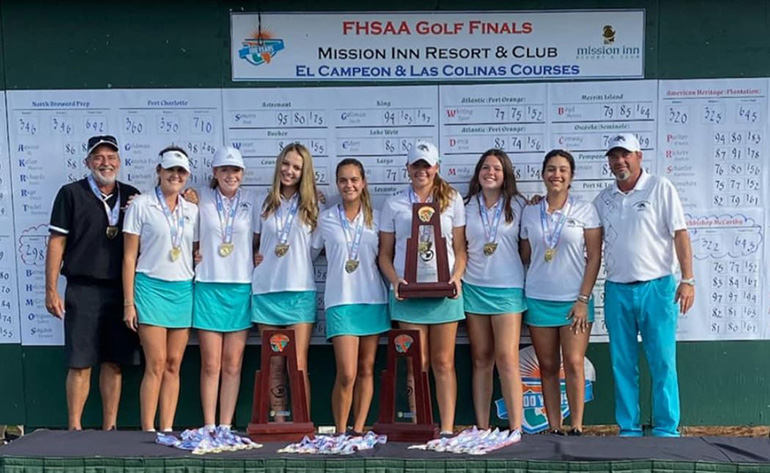 MIAMI | Following is a round-up of what South Florida Catholic schools accomplished in fall sports, based on information from the Florida High School Athletic Association. Click to read separate roundups for volleyball and cross country, which were posted in November. Click here for the football roundup.

Junior Isabella Bailly led the Archbishop McCarthy Mavericks to the 2A girls state championship in golf Nov. 5-6. The Mavericks defeated Plantation American Heritage by two shots – 643 to 645 in Howey-in-the-Hills. That helped the Mavericks avenge a three-shot loss in last year’s state final.

He said the teams know each other through the junior-golf circuit in addition to the proximity of the schools – they are five miles apart.

Bailly shot 75 and 77 over the El Campeon Course at Mission Inn Resort to finish tied for fourth at 154. Junior Jennifer Lilly took 16th by shooting 81 and 80 for a two-day 161. Senior Natalia Jimenez was two shots back at 82-81-163. The Mavericks also got a two-day 167 from sophomore Rileigh Baker and a 194 from sophomore Autumn Bryant.

The Mavericks finished the first day in third place with a 321, five shots behind Naples and one behind American Heritage. But the Mavericks remained consistent, posting the day’s best team round of 322 to win. Naples had skied to a 341, losing by 14 shots.

“Basically, they tried to not get distracted by everything from the outside,” Phillips said of how the Mavericks won state. “They came together and did really well.”

Phillips said the Mavericks improved by building camaraderie. It showed in the results. Archbishop McCarthy won the Lady Mustang Invitational and placed high in several other tournaments.

Senior Natalia Jimenez, who signed to play college golf at NCAA Division II Rollins College, had an exceptional season. She won three invitationals, including the Antigua National High School Golf Invitational in Arizona. She led the Mavericks to an eighth-place finish in a tournament that featured schools from around the country.

Phillips said the Mavericks stand a good chance to repeat as champions.

Christopher Columbus finished tied for sixth in the Class 3A boys golf tournament Oct. 29-30. The Explorers shot a two-day 613 to tie with Boca Raton. Tallahassee Chiles won the event with a two-day 582. Columbus’ Hans Risvaer finished tied for ninth with back-to-back 72s for a two-day 144.

Belen Jesuit took 12th in the 3A boys state championship swim meet with 75 points at Sailfish Splashpark Aquatic Athletics Center in Stuart. St. Thomas Aquinas took 19th with 42 points. In the 200-yard freestyle, Belen’s Andres Wong took second in the 200 freestyle in 1:40.22 and fifth in the 100 freestyle. The Wolverines also earned a seventh-place finish in the 400 freestyle relay in 3:15.71.

In the Class 3A girls meet, Aquinas’ Kaitlyn Thomas took seventh in 1-meter diving with a 367.75 score. She led the Raiders to a 17th-place finish in the team race with 47 points.

In the 2A girls meet, Cardinal Gibbons took 37th with three points. Sophomore Melody Yates scored the Chiefs’ only points with a 14th-place 1:02.35 in the 100-yard backstroke.