St. Ambrose: power of the Word

Statue of St. Ambrose stands in front of his namesake church in Deerfield Beach. A bas-relief of the saint can be seen on the church as well.

The main crucifix glitters in the afternoon sun at St. Ambrose Church. The round images at the ends of the cross show Mary and John, the only two followers who kept watch with him at Calvary.

Mosaic of Christ carrying his cross was made by La Musa Mosaici, based in Castel Gandolfo, Italy.

Mosaic of the risen Christ was made by La Musa Mosaici, based in Castel Gandolfo, Italy.

The Church is represented by a ship in this window at St. Ambrose Church.

The hand of God reaches through the Burning Bush to create the Ten Commandments in this window at St. Ambrose Church.

Several Christian symbols blend in this window at St. Ambrose Church. From left, they are a lamb, for Jesus; the Chi-Rho monogram, the first two Greek letters in Christos; and loaves and fish, from a famous miracle by Jesus. Above them all is a three-lobed Triquetra, symbolizing the triune God.

A lamp stands for the Word of God in this window at St. Ambrose Church. Above it are two forms of books, a scroll and modern book.

In this window at St. Ambrose Church, a dove carries two symbols from the story of Noah. The olive branch symbolizes peace, while the rainbow recalls God's vow never again to destroy the world through flood.

The seashell of baptism flows toward linked rings in this window at St. Ambrose Church.

Several symbols of ordination blend in this window at St. Ambrose Church: the dove, for the Holy Spirit; the thurible or censer; and the Keys to the Kingdom of Heaven.

The heart of Mary is pierced with seven daggers, representing the Seven Sorrows, in this window at St. Ambrose Church.

A fleur-de-lis forms the center of this window at St. Ambrose Church. A stylized lily, the fleur-de-lis is a symbol of Mary and of purity.

A crucifixion window casts a multicolored shadow at St. Ambrose Church. The window is part of the church's Pietâ¡ Chapel, for private devotions.

A full-size crucifix dominates the chapel at St. Ambrose Church. Beside it are images of Mary and Joseph, the only followers of Jesus who kept company with him at the time.

Three images front the altar in the chapel of St. Ambrose Church. The lamps stand for the Word of God, which the Bible calls a "lamp unto my feet." The Chi-Rho is an old monogram for the first two letters of Christos. And the Alpha and Omega are taken from Jesus' self-designation in the Book of the Apocalypse.

An iconic painting of St. Ambrose stands in the chapel at St. Ambrose Church. The image recalls the bishop's education in Greek classics -- uncommon in fourth century Italy, when he lived.

St. Joseph is the unusual subject of a prayer grotto at St. Ambrose Church. Mary has her own grotto at the church.

Cross and crown, standing for authority and eternal life, blend in a seatback for a priest's chair at St. Ambrose Church.

DEERFIELD BEACH | People like St. Ambrose seem to be born leaders. He was chosen bishop by acclaim. He defended the faith against heresy. He led a public protest to save a church for Christian use. He even forced an emperor to repent in public. 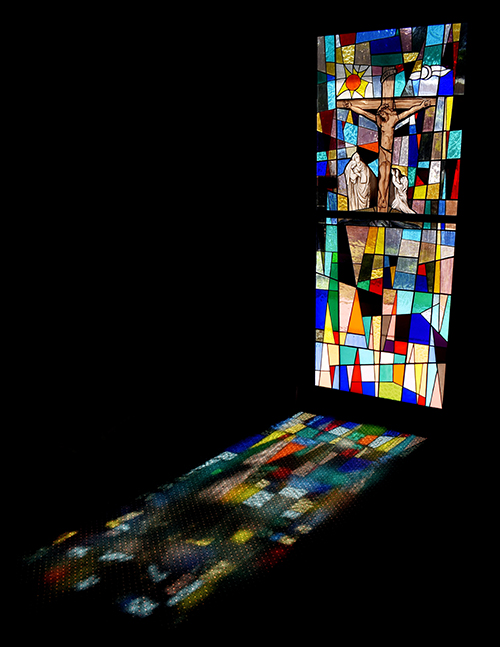 A crucifixion window casts a multicolored shadow at St. Ambrose Church. The window is part of the church's Pietá Chapel, for private devotions.

All this by a man who didn’t even study for the priesthood.

Ambrose, the namesake of a parish in Deerfield Beach, served as bishop of Milan in the fourth century. Serving as both a churchman and statesman, he was renowned for his sermons, scholarship, and for taking action when needed.

Born around 339 in what is now Germany, Ambrose grew up in Rome under the care of his widowed mother and his older sister, a nun. He studied law, literature and rhetoric, then was appointed as a governor residing in Milan.

But his civil service was cut short in 374 during a contested election for the next bishop of Milan. Abruptly, a crowd demanded Ambrose for the bishop's chair. This even though he hadn't even been baptized, let alone trained clerically. He literally fled and hid, but later gave in — baptized, ordained and consecrated within eight days.

Ambrose's first act was divestment: his money to the poor, his land to the Church. He threw himself into study of the Bible and the Church Fathers, as well as Greek and Latin classics. He used Eastern melodies in his hymns. And he developed allegorical teachings about the Bible, especially the Old Testament.

He is honored as one of the four original Doctors of the Church — along with saints Augustine, Jerome and Gregory the Great — as among the greatest teachers of the faith. 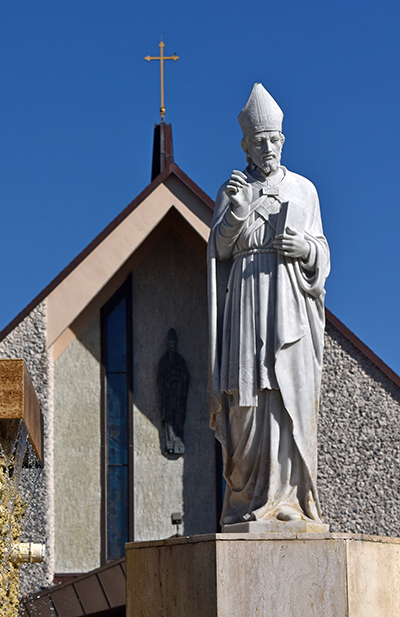 Statue of St. Ambrose stands in front of his namesake church in Deerfield Beach. A bas-relief of the saint can be seen on the church as well.

Somehow, he managed to maintain an open-door policy, counseling parishioners and government officials alike. His Sunday sermons were so compelling that listeners took notes, which still exist. He even mentored St. Augustine, who said Ambrose's sermons persuaded him to be baptized.

His talents often returned him to the public square, especially in opposing the then-popular Arian heresy. When Arians tried to seize a basilica for public worship, Ambrose and his congregation barricaded themselves inside until the effort was rescinded.

So great was his influence that when Theodosius, emperor of the Eastern Roman Empire, massacred 7,000 during a rebellion, Ambrose ordered him excommunicated. Theodosius had to do public penance — weeping in church without his royal robes — before being reinstated.

Despite the run-in, the two grew close in later years. On the emperor's death, Ambrose said he loved and prayed for him. And Theodosius had famously said, "I know no bishop worthy of the name except Ambrose."

He was so loved that on April 5, 397, the day after he died, five bishops found it hard to serve the many who asked for baptism. The feast of Ambrose falls on Dec. 7, the day in 374 when he became bishop of Milan.

In Deerfield Beach, the story of the church that bears his name is a story of growth. Founded in 1962, the church celebrated its first Mass at a junior high school auditorium. The congregation soon grew to 450, then renovated two storefronts for worship.

The real estate was needed for the parish's many activities. They include a food pantry for the needy, a St. Vincent De Paul Society, and outreaches to the elderly, disabled and bereaved. 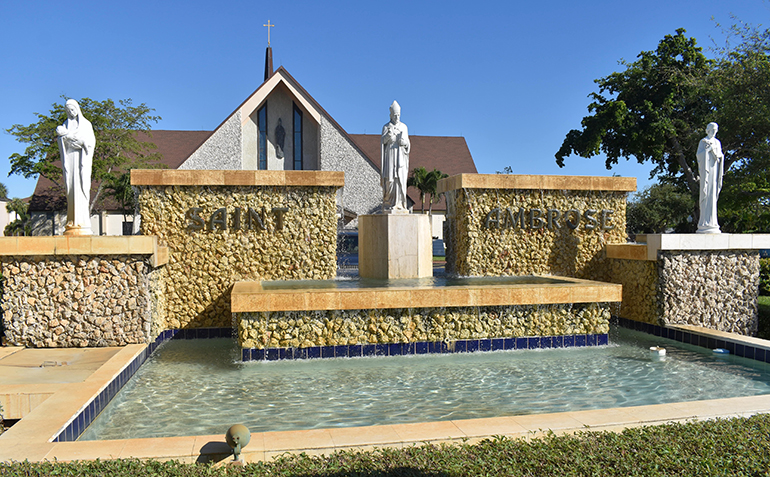 Other News from St. Ambrose Church