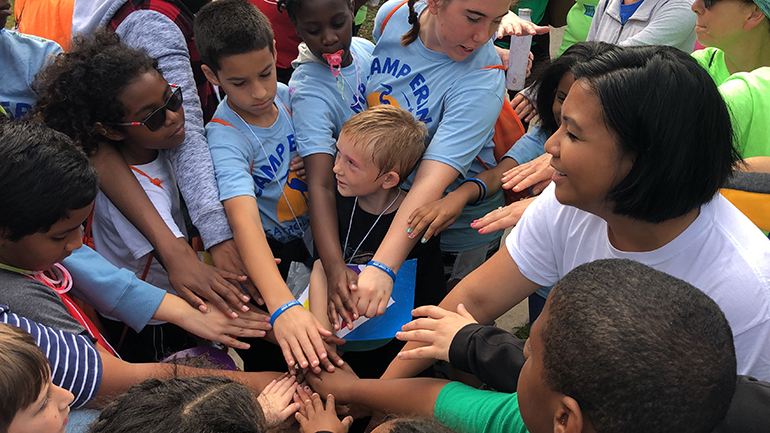 Campers and volunteers from Camp Erin gather around and place their hands in the center before a cheer. Camp Erin is a weekend long, bereavement camp sponsored by Catholic Hospice for kids and teens from 6-17, that fuses grief education with traditional camp fun. The next camp will be October 18-20 at Hugh Taylor Birch State Park in Fort Lauderdale.

FORT LAUDERDALE | When a loved one dies, a process unfolds: funeral arrangements, visits from family and friends, condolences, flowers, cards, and even food for the family of the deceased; followed, for Catholics, by a solemn Mass and burial.

Essentially, death is an adult affair. But what happens to the children and teens of the family? Often, if they are very young, they do not understand; if they are older, they might understand, but will still have to deal with an array of emotions, confusion and denial.

None of those emotions can be healed instantaneously, but Catholic Hospice can help with Camp Erin, a free, biannual weekend bereavement camp for kids and teens ages 6-17 who have suffered the death of a loved one. The camp fuses grief education and emotional support through activities such as art, music, pet therapy, mindfulness, remembrance ceremonies and more, with traditional camp activities like canoeing, hiking, and even a sing-along around a camp fire, s’mores included.

Although Camp Erin is affiliated with Catholic Hospice, it welcomes children of all faiths and backgrounds. The next Camp Erin will be held Oct. 18-20 at Hugh Taylor Birch State Park in Fort Lauderdale.

Gian Carla Santayana, the bereavement camp’s coordinator, said education and support go hand in hand when it comes to grief.

Camp Erin provides a learning, coping, and bonding environment that helps children understand that death is a natural part of life. 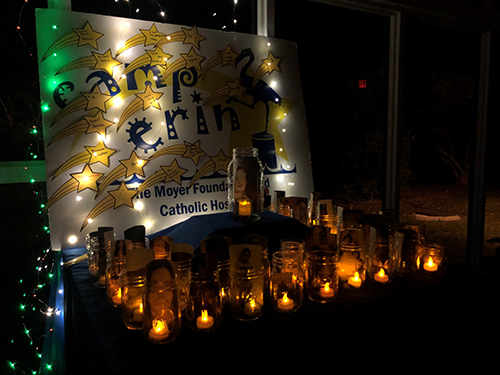 With pictures and candles aglow, Camp Erin campers honor their dearly departed in a Remembrance Ceremony. Camp Erin is a weekend long, bereavement camp sponsored by Catholic Hospice for kids and teens from 6-17, that fuses grief education with traditional camp fun. The next camp will be October 18-20 at Hugh Taylor Birch State Park in Fort Lauderdale.

Melissa Lorenzo lost her mom to cancer when she was 15. A counselor from Catholic Hospice referred her to Camp Erin. At first, she didn’t want to go. “I don’t like people seeing me like that,” said Lorenzo.

But what helped her cope during the weekend was the fact that every camper there, regardless of age, had experienced loss. “I wasn’t alone,” said Lorenzo, adding that she left camp feeling relieved and supported.

Santayana said campers are sent home with reading materials and resources for their families, so that together they can figure out the next steps. The Camp Erin team also calls to check in periodically.

While preference is given to new campers, previous campers can return if space permits. That’s what Lorenzo did when her best friend and another friend died in a car accident.

Now 19, she volunteers at Camp Erin, where she enjoys making kids laugh.  “Losing a loved one isn’t easy. If I can help others go through it, that’s what I want to do,” said Lorenzo.

She is currently pursuing a degree in homicide investigation at Miami Dade College, and plans on using her experiences at Camp Erin to help the families she will encounter at work.

Camp Erin launched in 2002 under The Moyer Foundation, now known as Eluna. It was founded by Major League Baseball pitcher Jamie Moyer and his wife Karen Phelps, and named in memory of Erin Metcalf, a Make-A-Wish Foundation recipient who befriended the Moyers. Eluna partners with local organizations in 40 Major League Baseball cities throughout the U.S. and Canada to support children and families impacted by grief or addiction.

Ana Milagros, 36, has volunteered with Camp Erin since its inauguration. At the time of her father’s death, she was an adolescent and had never heard of a bereavement camp. Later, as an adult and social worker, she decided to check out the camp by volunteering. She has returned ever since, twice a year, often with friends and family who also volunteer.

“It’s a shared experience, and you just have to make yourself available to these kids. When they arrive, there are nerves at the beginning, and at the end they have bonded. They’re able to take these experiences with them, and take them into other areas, like school, and learn to talk with their families. It’s not just about the grief, it’s an opportunity to grow from it,” said Milagros.

Sometimes, even the volunteers discover something about their own grief. Prior to his work with Camp Erin, Keith Barreras, 38, volunteered at grief centers and Camp Brave Heart in Polk County. His mother was diagnosed with cancer when he was 12, and she died six years later. Like Milagros, he could find no place to help him cope.

“People didn’t realize there was a need for grief services for children and teenagers,” said Barreras. “I never really stopped and thought about it and realized that there was anything different about me. But then at this bereavement center where I was volunteering as a facilitator, it kind of all came together, and I realized how much it really did affect my life.”

His mother’s death sparked a lifelong passion to work in grief counseling and advocacy, and he is currently earning a degree from Florida Atlantic University. Barreras is also pushing for grief support groups to be established on college campuses. His goal is to educate and unite families in their grieving process so that they never feel alone.