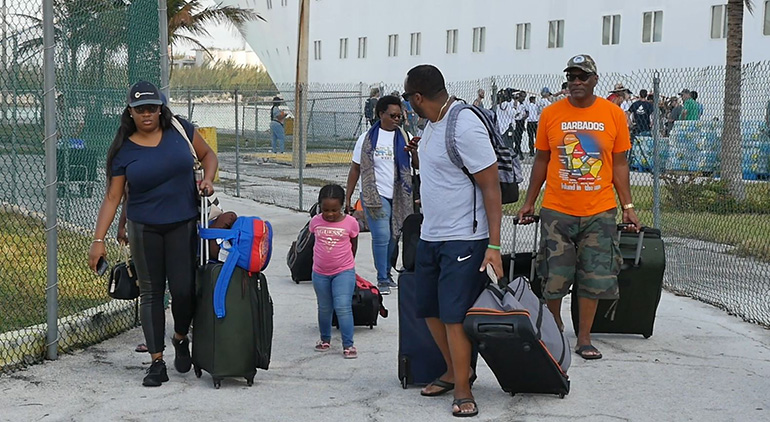 Some of the 200 Bahamian residents stranded in South Florida during Hurricane Dorian arrive in Freeport Sept. 6. Bahamas Paradise Cruise Line's Grand Celebration ferried them back on a humanitarian mission that also brought more than 1,100 evacuated Bahamian and American residents to the Port of Palm Beach Sept. 7.

“A number of people from Grand Bahama and Abaco Islands had been evacuated and have come to the City of Nassau — in fact all of our teachers from both primary and high school and special education schools are all here and I had an opportunity to meet with them in two groups today,” Archbishop Pinder told the Florida Catholic by phone Sept. 8.

He had the entire group of evacuees at an 11 a.m. Mass which the archbishop celebrated at the St. Francis Xavier Cathedral in Nassau on New Providence Island.

“I spoke about the hurricane aftermath, then invited the people to come up for a blessing and we spent some time in quiet prayer commending to God the many who perished in the storm,” the archbishop said.

The death toll in the Bahamas had officially climbed to over 40 as of the weekend and was expected to continue rising as search and rescue operations continue. 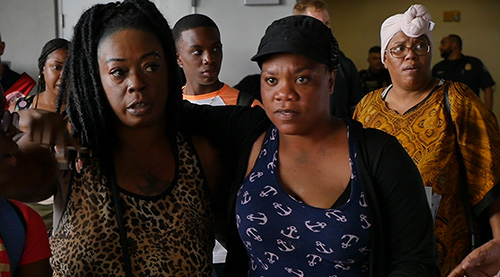 After vetting by immigration officials, residents of Grand Bahama evacuated from freeport on Bahamas Paradise Cruise Line's Grand Celebration arrive in the Port of Palm Beach Sept. 7. The cruise line returned with more than 1,100 evacuated Bahamians as well as American residents who were stranded there by the storm.

“It has been a horrific experience, many of them lost dwellings, some of them lost all their possessions; going through a Category 5 hurricane is something not too many of us have experienced,” Archbishop Pinder said.

“It is sheer terror and confusion for those who had their homes compromised in the middle of the storm and had to relocate, and all the challenges that poses, and then be taken to places where there were large crowds of people.”

“Much of the stories (I am hearing) are stories of terror, fear, pain, loss and so on,” Archbishop Pinder noted of his meeting with staff and parishioners.

Hurricane Dorian stalled over the northern Bahamas Sept. 1-3 as one of the strongest storms in Atlantic history, with sustained wind speeds maxed out at 185 mph, tying a handful of other hurricanes for the second-strongest storm in the Atlantic since 1950.

Dorian also was responsible for damage and several fatalities along the U.S. East Coast and in Canada, but the Bahamas, by far, suffered the brunt of the storm. 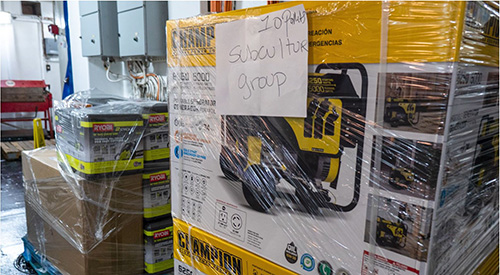 The Grand Celebration from Bahamas Paradise Cruise Line sailed from Palm Beach the evening of Sept. 5 on a humanitarian mission, loaded with more than 225,000 pounds of supplies, including water, food, personal hygiene products, medical equipment, generators and more.

The Bahamian government estimates that Dorian affected 70,000 people, some 60% of whom may have lost their homes. Many are reportedly still unaccounted for.

Asked about the status of Church staff, clergy, facilities and churches throughout the Bahamas, Archbishop Pinder pointed out that two schools and one parish on Abaco Island were destroyed. They include St. Francis de Sales Catholic School in Treasure Cay and Every Child Counts School for Special Students in Marsh Harbour, along with Sts. Mary and Andrew church and rectory in Treasure Cay, which the archbishop described as now “a pile of rubble.”

On Grand Bahama near Freeport, the retreat center and church of Mary Star of the Sea suffered some damage as well. A group of storm evacuees have taken up temporary residence at the campuses of both St. Francis de Sales and Mary Star of the Sea parishes, according to Archbishop Pinder.

The archbishop said his clergy are accounted for following the hurricane and that it was fortunate that a recent clergy appointment for St. Francis de Sales Parish had not yet arrived in Abaco Island for his new assignment. 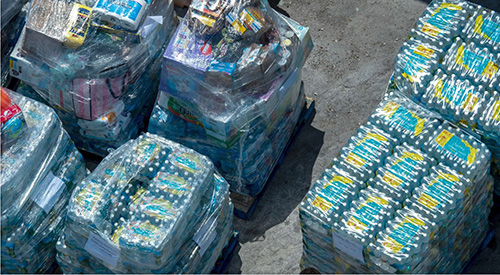 Pallets of water bottles were among the more than 225,000 pounds of supplies delivered to Freeport, Bahamas, by Bahamas Paradise Cruise Line's Grand Celebration. The ship sailed from Palm Beach the evening of Sept. 5 and returned Sept. 7 with more than 1,100 evacuees, fleeing from the ravages of Hurricane Dorian.

“Thank God he didn’t because he probably would have been washed away with the storm,” Archbishop Pinder said. “What most worries me at this point is making sure everyone has the basic needs and that we have a good assessment of the needs and priorities.”

The Bahamas government, he said, plans to put up temporary residences in the impacted islands because not everybody there has been evacuated.

The archbishop said he has received messages of support and offers of assistance from as far away as Australia, Canada, Italy — “and one of my classmates in Wisconsin wrote me a very heartening message just recently. We are also getting a lot of support from the Miami Archdiocese.”

“We are thinking now of the long-term efforts and that we will need a huge amount of assistance in dealing with this from other entities and agencies with more capacity and experience,” the archbishop said. 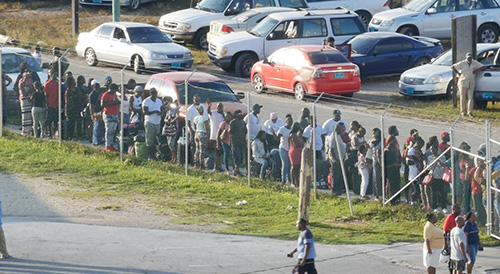 Residents of Grand Bahama line up to board the Bahamas Paradise Cruise Line's Grand Celebration Sept. 6. The ship returned to the Port of Palm Beach Sept. 7 with more than 1,100 evacuated Bahamian and American residents aboard.

“One of the things that certainly is an aspect of this is the trauma of those who have gone through the hurricane and our teachers will be meeting with professionals (counselors) staring tomorrow,” Archbishop Pinder said. “After Hurricane Joaquin (2015) in the southeast Bahamas one of the things we did was arrange for some group counseling and it helped in the healing process.”

Separately, in a Sept. 5 video statement posted on the Nassau Archdiocesan website, Archbishop Pinder said he believes the official death toll “is bound to increase.”

“We live in a hurricane zone in the Bahamas and as a consequence we must always prepare, but preparing alone is not going to stop hurricanes from coming our way nor does it stop the degree of damage hurricanes can do — but preparing certainly prepares us to be in a better position to respond afterwards,” the archbishop said in his statement. “Caring, of course, is what we must do when so many of those around us have been so severely harmed by hurricane such as Hurricane Dorian.”

“At this time, it is most important for us to remain unified to show our solidarity, our fraternity and care for each other. Certainly, we rely on the grace of the Holy Spirit to give us the wisdom, the peace of mind and the strength to make it through this most difficult time in the history of our nation.”

Meanwhile in Florida, some 1,100 Bahamian residents who were evacuated as a result of Hurricane Dorian arrived Sept. 7 at the Port of Palm Beach with transportation courtesy of Bahamas Paradise Cruise Line’s Grand Celebration, which was shuttling nearly 300 first responders and volunteers to the Bahamas earlier in the week. That earlier journey from Florida to the Bahamas included 200 Bahamian residents who were stranded in South Florida during Hurricane Dorian.

Bahamians who traveled back to Palm Beach via Grand Celebration had first cleared visa and passport control in Freeport and were met upon arrival in Florida by volunteers from various South Florida nonprofits, as well as representatives from the Bahamian Relief Consortium, according to the cruise line.