Ordination: Stories on the sidelines 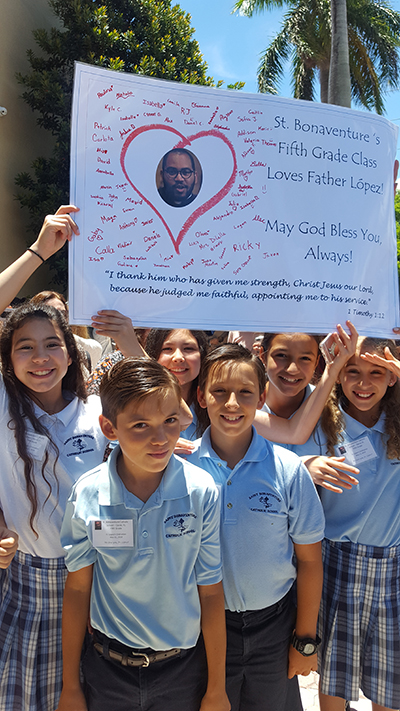 Fifth-graders from St. Bonaventure School hold up the sign they made for their "adopted" seminarian, Father Jose Enrique Lopez, after witnessing his ordination May 11 at St. Mary Cathedral.

MIAMI | Nine fifth-graders from St. Bonaventure School in Davie were among the more than 1,000 people who filled St. Mary Cathedral May 11 to watch and cheer as Archbishop Thomas Wenski ordained five new priests for Miami.

The fifth-graders had adopted one of those new priests – Father Jose Enrique Lopez – during his deaconate year. As he was finishing his studies, they were praying for him, sending him video greetings and well-wishes. He also visited them in person. The sacraments, including Holy Orders, are the topic covered in fifth-grade religion class.

This is the second year St. Bonaventure fifth-graders adopt a seminarian, and the second year a small group from the class attend the ordination – carrying, of course, a large poster proclaiming their well wishes for their adopted priest.

“It’s awesome. Kids really learn a lot. Instead of teaching from a textbook, they get to see what it’s all about,” said their teacher, Rosie DiLella.

Most of her students, when asked, said they had seen baptisms and first Communions. Some had been to weddings and confirmations. None had witnessed an ordination – which is probably true for most Catholics.

“They don’t even know what a nun is. We don’t have nuns in the parish. So it’s very sad. (But) it’s just wonderful that they let us do this,” said DiLella, who described the ceremony as an “amazing” experience. 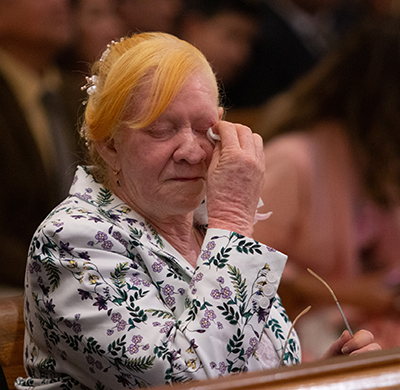 Carmen Amanda Acosta, mother of Father Yonhatan A. Londoño, wipes away tears during the ceremony.

After graduating from high school in his native Colombia, Carmen Amanda Acosta’s son had a choice to make: the priesthood or medicine.

It’s clear she encouraged that inclination. He remembers accompanying her as a child when she delivered home-cooked meals to the local parish priests on Sundays. She also continues to take Communion to the sick, visit with them, share with them. And she delivers groceries to the needy.

Even before she got married, she remembers thinking, “If I had a baby, how beautiful it would be if he were to become a priest.”

When she got married and got pregnant, she would pray at daily Mass: “Oh, my Lord, please give me the gift of a son who is a priest.” Or a daughter who entered religious life.

“He sent me a lovely son,” Acosta said, her only child. Now this is her prayer: “That he will be a very holy person. That the Blessed Mother will take care of him for me and protect him.” 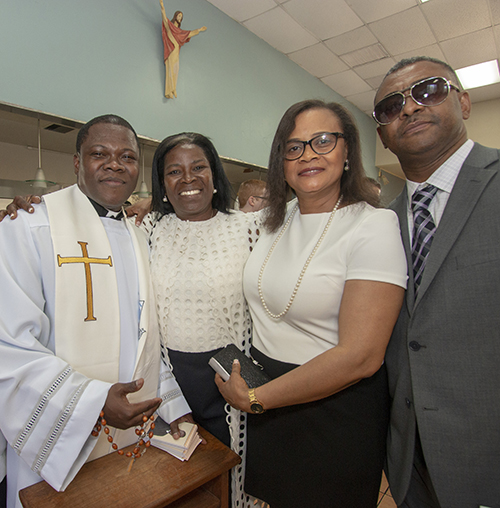 While giving out blessings, newly ordained Father Reynold Brevil poses with Ketty Descardes, second from right, the woman "who started it all" - his priesthood in the Archdiocese of Miami. Also pictured, her husband, Francois, and another friend, Morosi Lila Louis.

She describes herself as the one “who started it all.” Ketty Descardes is the Haitian woman who took in Reynold Brevil when his life hit a low point. After nine years of formation, including temporary vows with the Redemptorists in his native Haiti, he left the order on the cusp of being ordained.

He came to South Florida to attend the funeral of his nephew, the son of his older sister, who had raised him since the age of 6. Descardes and her brother found him praying intently before the Blessed Sacrament at St. Elizabeth Ann Seton Church in Coral Springs. They figured there was something wrong: Haitian men don’t usually spend a lot of time in adoration.

The second day they saw him, they decided to speak to him and hear his story. Burned once before by trying to help a fellow Haitian, Descardes overcame her skepticism and welcomed Brevil into her house. She helped him with immigration paperwork. She connected him with archdiocesan priests and the vocations director. She helped him fill out forms and applications.

After a year, he entered the seminary for the Archdiocese of Miami, prepared for another nine years of study. Thankfully, it only took five. She and her husband, Francois, helped him move into the seminary, like parents moving their child into a college dorm.

At the ordination Mass, Descardes took up the offertory gifts alongside the mothers of the other priests.

“I think the Lord wanted something bigger for him,” she said after the ceremony. “It took him 18 years to get to this day. So his perseverance is out of the ordinary.” 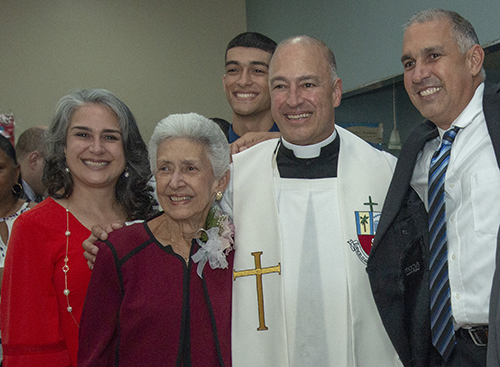 Father Elkin Sierra takes a break from giving out blessings to pose with his family, from left: his sister, Ana, his mother, Stella, one of his nephews, Vincent, 18, and his brother, Luis, who also became a firefighter/paramedic.

“I’ve never seen someone take off after a dream with so much focus,” said his brother, Luis Sierra, who followed his older brother into a career as a firefighter/paramedic. Father Sierra left that very fulfilling profession for the priesthood just four years from being able to retire with a full pension.

One of his co-workers said he wasn’t surprised. “We knew it was coming,” said Humberto Quintela, who worked at Miami-Dade Fire Rescue with Father Sierra for 17 years. “Because he had talked about it for years on and off.”

Even though Father Jose Enrique Lopez is her only child, his mother, Lissette Alvarez, sees his ordination from a faith perspective. “God took him from me,” she said. “If it’s him, that’s fine.” 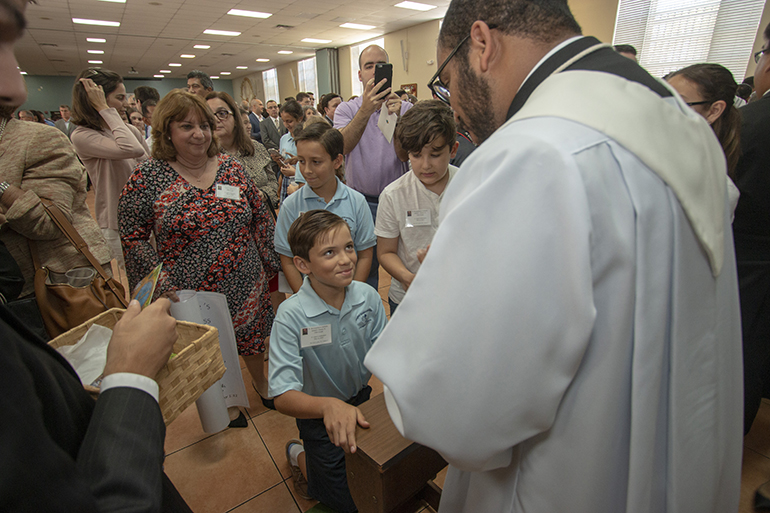 Newly ordained Father Jose Enrique Lopez blesses a fifth-grader from St. Bonaventure School in Davie. The fifth grade class "adopted" him during the past year as part of their lessons on the sacraments, including Holy Orders. This was the first ordination the nine children who attended had seen. "It's awesome," said their teacher, Rosie DiLella (at rear). "Kids really learn a lot. Instead of textbooks they get to see what it's all about."