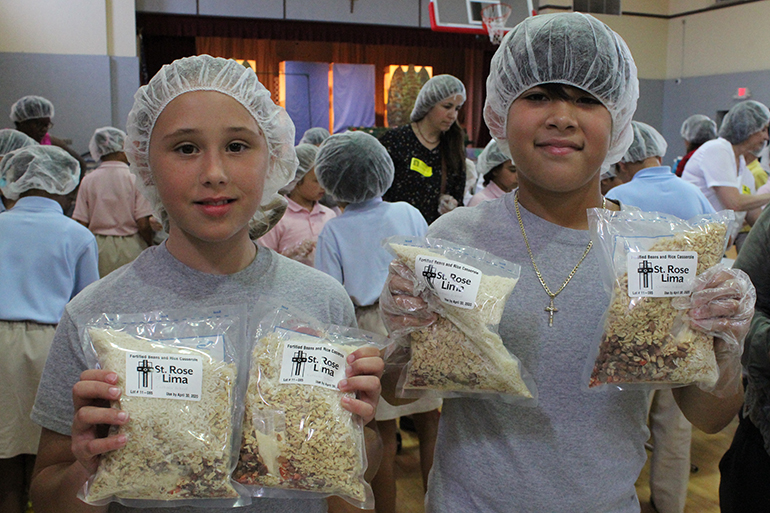 MIAMI SHORES | Giving up ice cream for Lent took on more meaning this year for fourth-graders at St. Rose of Lima School.

They learned the true value of their ice cream money — along with their allowances, loose change, and dollars for dress-down days — when they raised over $1,500 to buy and pack over 6,000 meals for the hungry in their neighborhood.

Guided by their teachers, Claudia Karleskey and Paulina Cuadrado, and working with an organization called Meals of Hope, the fourth-graders packed and donated the meals to the food pantry at neighboring St. Martha Church in Miami Shores.

“We have a beautiful relationship with them,” said Stephen Brown, St. Rose’s principal. “They wanted all of them. We weren’t sure if they would take them all, but they said they would, and we were excited.” 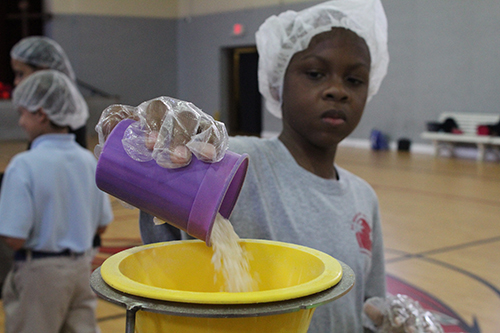 St. Rose of Lima School fourth grader Zakary Phanord pours rice into a funnel during a Meals of Hope packing event in the school gym April 30. During Lent, fourth graders from the school raised more than $ 1,500 to buy and package 6,000 meals, all of which were donated to St. Martha Church, Miami Shores, food pantry. 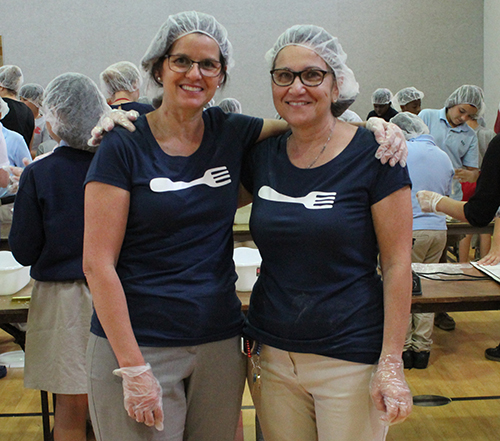 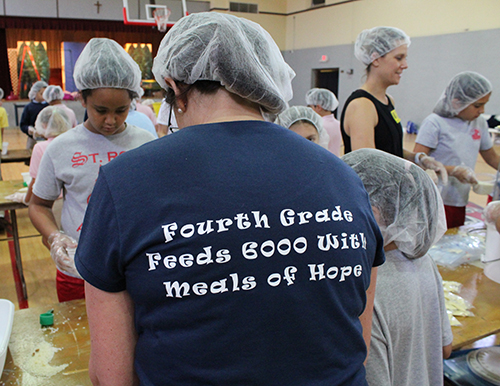 Meals of Hope is a Naples-based non-profit whose goal is to provide healthy, affordable and accessible meals for the hungry. While the organization provides meals to Haiti, Jamaica, Nicaragua, Malawi and more, they aim for meals packed in a community to stay in that community.

On April 30, about 50 students, parent volunteers and others filled the gym at St. Rose to pack the meals. From the options available from Meals of Hope, they selected a fortified rice and beans casserole, which includes rice, pre-cooked dried pinto beans, soy protein flour, veggie flakes (carrots, onions, tomatoes, celery, bell peppers), and a packet with 21 vitamins and minerals in powdered form.

Each team of students and volunteers measured and poured the ingredients into funnels with a plastic meal bag on the bottom, then handed it off to weighing stations, where rice was added or removed. From there, the meal passed to a sealing station, where they were stickered and laid out, and finally packed into boxes.

Each bag has up to six servings, costs 25 cents, and, on average, one person can bag about 60 bags every two hours.

Teacher Cuadrado said the meal-packing also allowed her to integrate math lessons with the fundraising.

“Some kids brought pennies, some brought checks. It was great because we were learning about decimals. We would be adding all of this stuff and we had charts marking as to where we were,” she said.

But finally getting their hands on the rice, beans, and veggie-bagging action was the ultimate thrill for students.

“We’re helping people that can’t feed their children and I care about it because it’s important,” said fourth grader Amanda Whittacker. “It’s actually really fun. I like packaging and putting the stickers.”

“I like the fact that we know that we’re going to be helping people in our community,” said Emiliana Hueck, another fourth grader.

“It has been exciting and rewarding to see how the kids have responded to this endeavor,” said Karleskey. “I think the kids realized what they’ve been working for. Now that they’re actually in it and doing it, they see what their efforts went to.”

Annette Ditommaso, a parent volunteer, said feeding the poor holds a deeper meaning in her household. Last Christmas, her family volunteered at the Missionaries of Charity shelter in Miami. They prepared gift packages for the homeless women and children, collected money, and even prepared home-cooked dishes to serve at the celebration.

“It was an eye-opening experience for us,” said Ditommaso. “The women were so grateful. I told my boys, ‘We need to do more of this.’ It just felt really good to help, and the faces of appreciation and hope were just unforgettable.”

Ditommaso said she believes in sharing God’s blessings, and has passed those lessons to her children. Her son Michael, a recipient of St. Rose of Lima School’s Generosity Award, was very excited about the Meals of Hope event. Her eldest son, Nicholas, a sixth grader, was unable to pack meals, but said he looks forward to volunteering at future events.

“When we take these events, we take them full on with a full heart,” said Ditommaso. “I work, I have a job, but we take the time to be with the kids and show that it is important. We’re so busy and so in ourselves. I tell my children to look around. Look at the little things and then look at the person standing next to you. They mean something.” 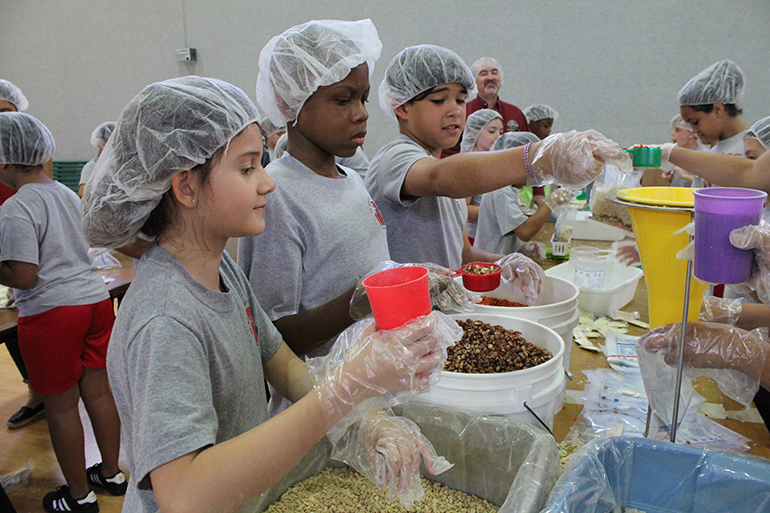 St. Rose of Lima School fourth graders wait to pour in veggie flakes, pinto beans, and soy powder during a Meals of Hope packing event in the school gym April 30.

Other News from St. Rose of Lima School

Tuesday, 12 May 2020
Learning and serving at St. Rose of Lima School