Author's visit inspires them to investigate Cuban history, and for some, family history 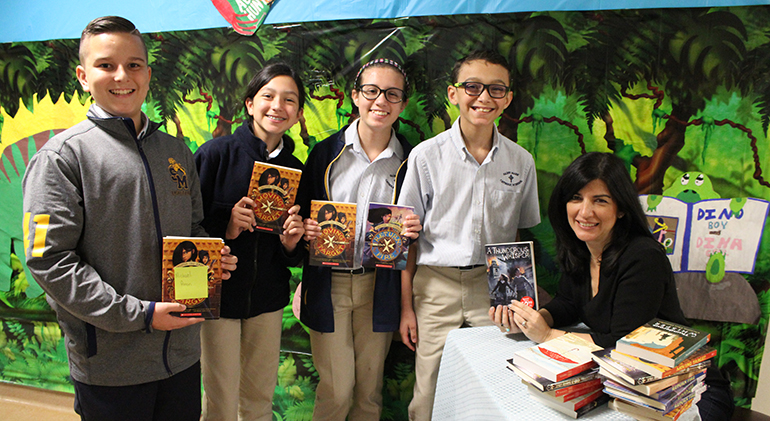 “The Red Umbrella” tells the story of Lucia, a 14-year-old born and raised in Cuba until the Cuban Revolution. That historic upheaval leads her parents to send her and her brother, Frankie, alone to the U.S. via Operation Pedro Pan, to avoid Communist indoctrination on the island. 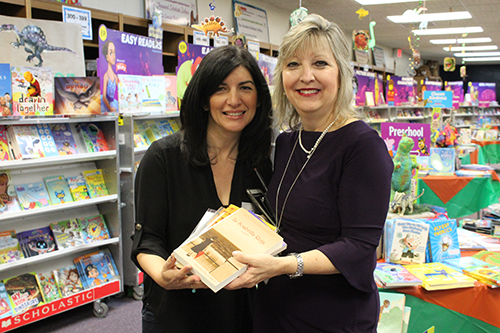 Pedro Pan, created by a Miami priest, Father Bryan Walsh, and the Catholic Welfare Bureau — today’s Catholic Charities — received more than 14,000 unaccompanied Cuban minors between the ages of six and 18, the largest exodus in the western hemisphere. The children were provided with foster care and education all over the country until their families arrived in the U.S.

During her March 25 visit to St. Mark to kick off its Scholastic Book Fair, Diaz Gonzalez discussed “The Red Umbrella” and her other books with the middle schoolers.

St. Mark’s media specialist, Sandy Garcia, originally recommended “The Red Umbrella” to middle school language arts teacher Danielle McConnell, whose Cuban family came to the U.S. in the early 1960s, around the same time as the characters in the story. While in college, McConnell explored the topic of Operation Pedro Pan in a Cuban American Literature course. She later learned from a relative that Father Walsh — later Msgr. Walsh — had assisted her family in finding educational scholarships for her father and aunt, who came to the U.S. in 1960.

“I was amazed that I never realized the connection he had with my family. As I did not learn this until I was an adult, I felt it was important for our students to learn about Operation Pedro Pan earlier so that they may appreciate how God works in our lives,” said McConnell.

Made aware of “The Red Umbrella,” she felt it should be a must-read for her students.

“After reading it, I thought this novel would be something different for the eighth graders to read since they study American history, and this is part of not only the history of the U.S. but South Florida, the Catholic Church, and even some of their own families,” said McConnell. 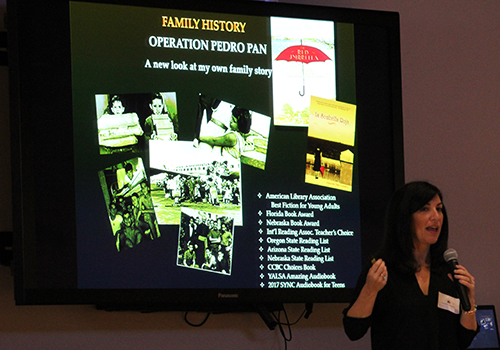 Author Christina Diaz Gonzalez discusses her first novel, "The Red Umbrella," which is based on the story of a young girl's journey via Operation Pedro Pan, the mass exodus of unaccompanied Cuban minors to the U.S. between 1960 and 1962.

Before students read the novel, she gave them with background information on the Cuban Revolution, Operation Pedro Pan, Msgr. Walsh, and the work of the Catholic Church at that time. McConnell said that one of the most difficult things for students to understand was why so many parents sent their children away to another country.

“They thought that it was a negative reaction. However, after reading the book, they realized the bigger picture and how it was an act of love to protect their families. They better understood why the Church helped as well. We discussed how the priests and nuns were forced to leave Cuba, which Gonzalez alludes to in the book,” said McConnell.

The story touched many students because it is written in first person, and through the eyes of a character who is about their age. For students with Cuban roots, the story hit even closer to home.

Eighth-grader Alexa Vicaria remembers hearing how her grandparents aided the resistance efforts against the Cuban Revolution before they left the island. One time, she was told, her great-grandmother and grandmother helped her great uncle hide weapons in their home. When two soldiers came to search their house and discovered the women alone, the senior officer dismissed the anti-revolutionary suspicions of the younger officer and they left. As it turns out, the weapons were hidden in the second story of the house.

“They ended up leaving and if it wasn’t for that older soldier, I don’t think I would be here. It would have been a very different story,” Alexa said. 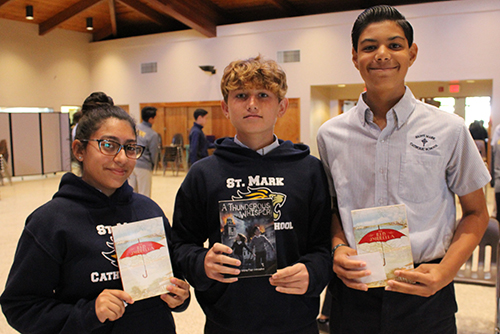 Historical fiction all around: St. Mark School students hold up their copies of "The Red Umbrella" and "A Thunderous Whisper," written by Christina Diaz Gonzalez. From left: Emily Cruz, Connor Cates and Pedro Jimenez.

Diaz Gonzalez said when she attends book events, she marvels as to how “The Red Umbrella” has become an intergenerational story.

“The book provides an avenue for people to talk. My mother-in-law never wanted to talk about her experience until I got the book out. It was personal. Now she can use the book to explain it without having to really go into details,” Diaz Gonzalez said.

“The Red Umbrella” also rings true today, as unaccompanied minors from all over the world continue crossing borders — including the one that separates Mexico and the U.S. Whereas the media was sworn to secrecy when Operation Pedro Pan was taking place, so as to protect the children and their families, the border crossings today are continually in the headlines.

The question, then as now, is: What level of desperation must a parent be feeling to send their child into exile, or life in another country, alone?

Even Msgr. Walsh admitted, in an article he wrote in 1971 for the Journal of Inter-American Studies and World Affairs, that “there is no one answer which covers all situations and circumstancesÃ¢â¬Â¦ No one can deny that separation from one’s family is always traumatic and painful. How could it be otherwise? However, at times it is necessary because it is the lesser of the two evils.” 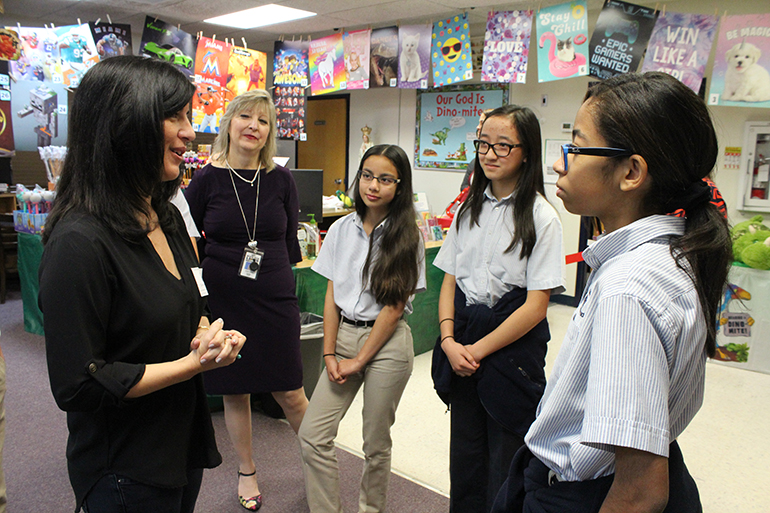 Other News from St. Mark School