Protecting children: By the numbers 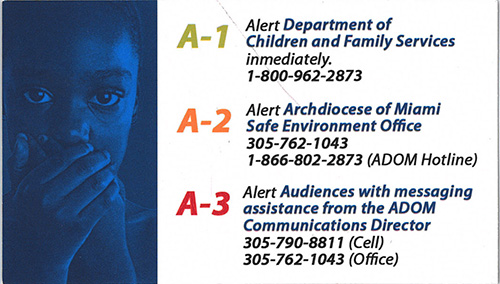 Back of business card-size AAA alert to remind pastors and other church personnel of the steps to take if they witness or are told of suspected abuse of children or vulnerable adults.

Donna Villavisanis - 04/29/2019 10:09 AM
Data that reveals the extent to which the ADOM is committed to protecting children and vulnerable adults.

Mary Miller - 04/28/2019 07:05 PM
Thank you for reminding all how many individuals have been introduced to Virtus and fingerprinted in the Archdiocese. Many children are safer thanks to this unique program.

Marbelia Zamarripa - 04/22/2019 08:29 PM
Thank you for this information, is always nice to match the name with face. also thanks for the phone numbers provided.

Claudia Romero - 04/19/2019 09:25 AM
It's great to know these numbers and information. The information shows how much the Archdiocese of Miami takes this matter seriously and contributes to making sure our community gets prepared in this matter of high sensitivity.

Claire Natoli - 04/16/2019 12:17 PM
The article was very informative and I was impressed on how the numbers skyrocketed.

Elizabeth Fedelim - 04/16/2019 10:20 AM
Again, these statistics are good to know about what is being done to protect children and vulnerable adults.