What happened to my faith? 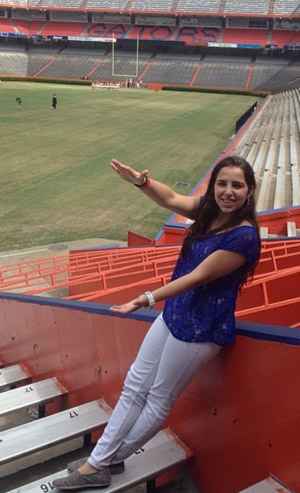 Florida Catholic newspaper freelancer and intern Christy Piña does the Florida Gator chomp at the Ben Hill Griffin Stadium, also known as "The Swamp." Piña is a senior studying journalism at the University of Florida.

It’s Sunday morning. My mom wakes me up at 10:30 for 11 o’clock Mass. I grudgingly get up (because honestly 10:30 is way too early to wake up on the weekends) and go. This is what my Sunday mornings consisted of as far back as I can remember.

I went to a Catholic high school. I was involved with campus ministry. I attended holy days of obligation with my family. I was a part of two youth groups, and a leader in one of them. I was a picture-perfect Catholic.

Once I got to college, that all fell through.

I can’t tell you what caused it. Honestly, I don’t really know. I just know that it happened.

When you go away to college, one of three things can happen to your faith. It can continue as if nothing has changed. It can strengthen. It can weaken.

From what I’ve noticed, more often than not, the faith weakens. For some people, going to Mass and getting involved with campus ministry is easy.

For others â the majority, I believe â it’s something you do when the situation presents itself. I was a youth group leader and a campus minister in high school because it was all around me. It was easy. It was fun. It gave me another excuse to hang out with my friends.

Once I got to college â I go to a public university â I was no longer in that Catholic-filled atmosphere. That atmosphere is what kept me going. Had I gone to a Catholic university, I probably would have maintained that relatively strong Catholic consistency.

I don’t want to say that I lost my faith because I don’t think I did, not entirely anyway. I still believe that God is guiding me through my life. I believe He continues to place people in my path that are blessings and lessons. That much hasn’t changed.

What has changed is that I no longer spend my free time at youth groups, nor do I attend Mass weekly, as I once did.

The way I see it is that if you live by the values, principles and beliefs instilled in us as Catholics, you are Catholic, despite your involvement in the Church.

So yes, I may have stopped attending Mass weekly and dropped my minimal involvement with the Catholic Gators, but I still consider myself Catholic, and that won’t change.

Christy Piña is a senior studying journalism at the University of Florida and a graduate of Msgr. Edward Pace High School in Miami Gardens. She freelances and interned with the Florida Catholic the past two summers.