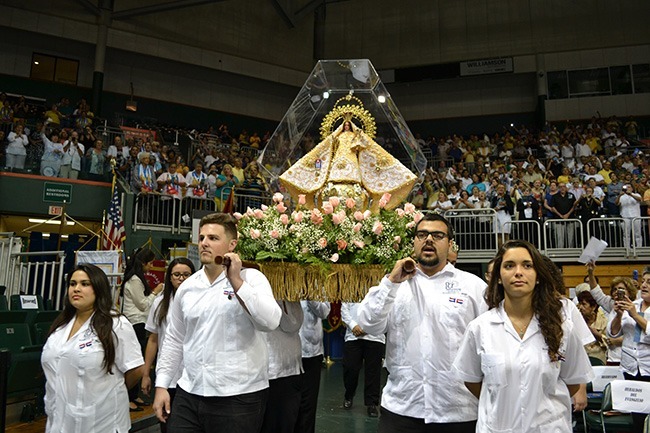 Members of Encuentros Juveniles, a group for youths and young adults, carry the image of Our Lady of Charity, patroness of Cuba, through the BankUnited Center in Coral Gables during the annual celebration of her feast day Sept. 8.

CORAL GABLES | On Sept. 8, hundreds of Catholics, mostly Hispanics from diverse nationalities, gathered at the BankUnited Center on the campus of the University of Miami to celebrate the feast of Our Lady of Charity, patroness of Cuba and co-patroness of the Archdiocese of Miami.

“For me she is very important because I grew up with her. She reminds me of my childhood, the many happy memories and sad memories, because we lost our freedom. But today we are here to pray to the Virgin so that Cuba can be free again someday,” said Francisco Pages, a Cuban exile who left the island 40 years ago. 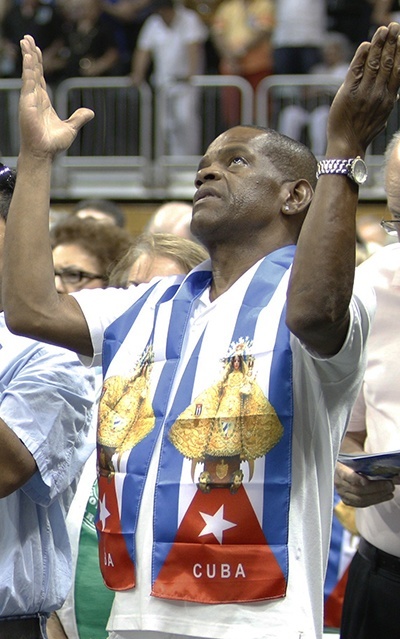 The faithful pray the Our Father during the Mass.

Hours before the start of the Mass, devotees feted their beloved “Cachita” with songs, praise, and prayer.

Father Juan Rumin Dominguez, the rector at Our Lady of Charity National Shrine, asked for a moment of silence for the Christians that are being persecuted in the Middle East. “We should be thankful to God for living in a country that offers us freedom,” he said.

Member of the movement Encuentros Juveniles (Youth Encounters) carried the image of Our Lady of Charity into the BankUnited Center, where devotees greeted their spiritual mother by waving white handkerchiefs and singing “Virgen Mambisa.”

A St. Brendan High School reporter interviews Archbishop Thomas Wenski before the Mass. http://www.youtube.com/watch?v=piLme7hBpGo&feature=youtu.be
Children and grandchildren of members of the Archdiocesan Guild of Our Lady of Charity carried the Cuban flag, while behind them the procession continued with participants bearing flags from all of the Latin American countries. Their citizens, replanted in South Florida, now venerate Our Lady of Charity as well.

Representatives of more than 20 apostolic movements active in the archdiocese also participated in the Mass, along with children and teens from eight archdiocesan schools, the children’s choir from Sts. Peter and Paul School, and the drum line from Belen Jesuit Preparatory School.

“I am Peruvian, but I love the Virgin because she is my mother, she accompanies me. I had many difficult times in my life and she made me feel loved,” said Carmen Lopez, a devotee as of five years ago.

Singer Tania Mart sang “Patroncita de Cuba” (Patroness of Cuba) and at the start of the Mass, Archbishop Thomas Wenski said: “I am very happy to share with all of the Archdiocese of Miami this grand celebration. I invite you all to accompany me in offering this Mass for the Cuban community, remembering all of the bishops and religious and lay people of Cuba.”

For 53 years, the feast of Our Lady of Charity has been celebrated in Miami “and every year we celebrate with much love and affection. It is the greatest celebration that the archdiocese has,” said Fernando Gomez, president of the Archdiocesan Guild of Our Lady of Charity, the group that organizes the event. 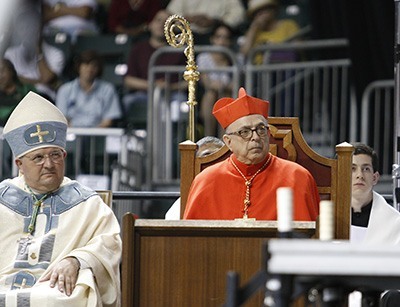 Cardinal Raymundo Damasceno of Aparecida, Brazil, takes part in the annual Mass for the feast of Cuba's patroness, Our Lady of Charity. The cardinal was in South Florida visiting the area's Brazilian community.

This celebration “has great symbolism,” said Father Dominguez. “The Church in Cuba has suffered for preaching Jesus Christ in the midst of an atheist and totalitarian regime. It is a way of recognizing that in the middle of the suffering and the pain, the Vrigin has never abandoned her children, and thanks to her, the children never lost their faith.”

“Our Lady of Charity continues to unite thousands every year, in Cuba and in Miami,” he added.

“She has been the crux of the faith of the Cuban community: Since she appeared in the Bay of Nipe in 1612, the community venerates her,” said Msgr. Pedro Garcia, who just celebrated 50 years of priesthood, and said he has celebrated the feast of Our Lady of Charity every single year, even when he was in Cuba.

“The name Charity signifies love, and love is the principal precept of Jesus Christ: to love one another,” added Msgr. Garcia, who is retired but continues to help out at the shrine.

“We pray on behalf of the exiled Cubans who had to leave their home, but were accompanied by the Virgin Mary, Our Lady of Charity that we venerate here today, as they reached Miami and other parts of the United States,” said Bishop Baldacchino in his homily. This year’s celebration was even more festive for having been accompanied by three gifts from the Vatican. First, as of August 28, a statue of Our Lady of Charity is ensconced in the Vatican Gardens. The image is a replica of the statue that was housed in a shrine in the Bay of Nipe (where the original image was found) and was lost for over 40 years.

“I am very happy that the patroness of Cuba can be found in the Vatican Gardens, where the Holy Father can walk by and remember Cuba and pray for the country where I was born,” said Gomez.

Secondly, Pope Francis sent a message to Cubans this year on the occasion of the feast day.

Finally, the pope declared that as of this year the feast of Our Lady of Charity will be celebrated as a solemnity in the Catholic Church — the highest rank of observance.

At the conclusion of Mass, Archbishop Wenski noted “If the motherland is agony and duty, as Jose Marti said, then let’s confront that agony and fulfill our duty… Let us put into practice the three words that Pope Francis stressed in his message to the Church and people of Cuba: Rejoice, arise and persevere.”
In his remarks, Cardinal Damasceno of Aparecida added that “the common devotion to the holy mother of God is a characteristic that our countries share, one that we have in common. May Our Lady of Charity, whom we celebrate today, continue helping the Cuban community to remain faithful to their Christian faith.” 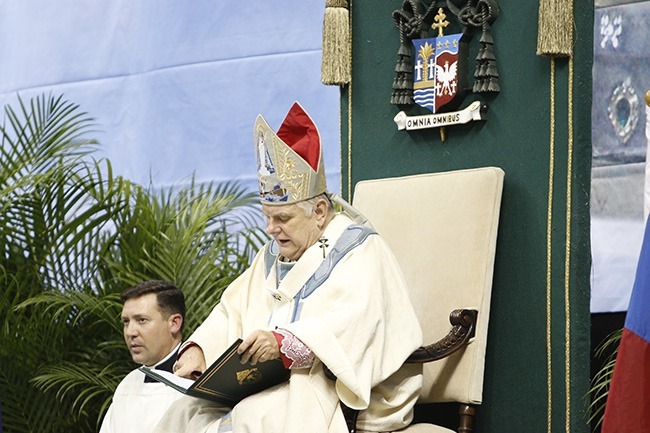 Archbishop Thomas Wenski delivers his remarks at the conclusion of the Mass.