Sts. Thomas More and John Fisher: Men for our season 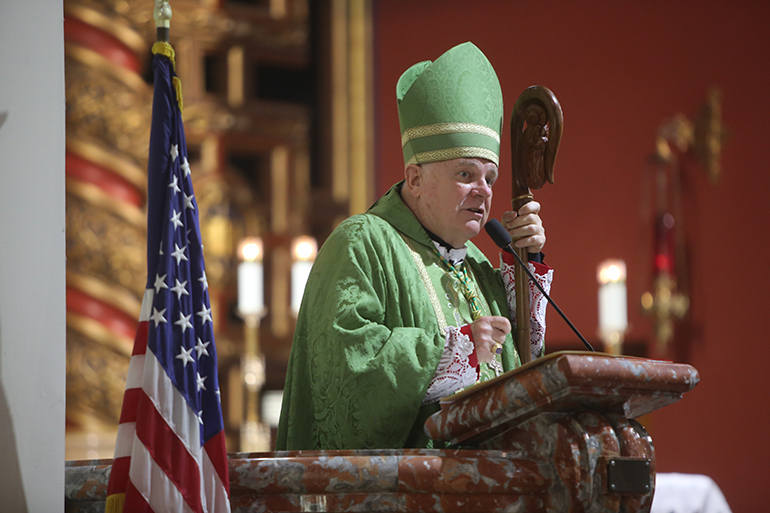 Archbishop Thomas Wenski preaches the homily during the Mass at Little Flower Church where the relics of St. Thomas More and St. John Fisher were venerated, kicking off the Fortnight of Freedom in the archdiocese.

Archbishop Thomas Wenski preached this homily at the opening of the Fortnight for Freedom Mass at Little Flower Church, Coral Gables, June 19, 2016.

The Church of the Little Flower is blessed today to receive relics of two great English saints: one, St. Thomas More, was a statesman, an intellectual, a Catholic layman who took his baptism seriously; the other was a bishop who also took his office as bishop seriously.

Both were martyred by King Henry VIII because they would not consent to his making himself the head of the Church in England, which he did because the Pope would not allow him to divorce his wife. In order to have his way, he shattered the unity of the Church in his nation by separating it from Peter and Peter’s successors, the bishops of Rome.

St. Thomas More’s life is recounted in a famous play, later made into a motion picture called, “A Man for All Seasons.” The two saints, St. Thomas More and St. John Fisher, are men for our season, for the times in which we live. Today, a regime of “political correctness” wishes to impose itself on us and force us to conform ourselves, our values and our beliefs to the ascendant secularism of our time.

When “peer pressure” convinced almost everybody in Tudor England “to go along” with the King in order to “get along,” Thomas More and John Fisher dissented. At first cajoled and tempted with bribes, then imprisoned and tortured, they refused to break away from the Church founded by Jesus Christ on the rock of Peter. As Thomas More famously said, “I am the King’s good servant but I am God’s servant first.”

For some years now, the Catholic bishops here in the United States have wanted to focus our attention to the threats to religious freedom both at home and abroad. And so, beginning with the feast days of John Fisher and Thomas More and ending with our July 4th celebration of our nation’s independence, we observe a “Fortnight of Freedom,” two weeks of prayer petitioning our Lord that this most basic right, and the foundation of all other human rights, the right to religious freedom, the right to freedom of conscience, be protected.

If anyone thinks that religious freedom is not under assault in our world today, or that our concerns are a bit overwrought, I would remind you of the ongoing genocide against Christians in the Middle East. We have seen on our evening news programs images of Christians beheaded, crucified or burned alive in cages simply because they professed what Peter professed in today’s Gospel: that Jesus is the “Christ of God.”

In the second decade of the 21st century, some 150,000 Christians are killed for their faith every year. Like St. Thomas More and St. John Fisher, and like Sts. Peter and Paul, St. John the Baptist and the first martyrs of Rome, whose feast days the Church observes during these last days of June, these modern-day martyrs are victims of a despotism in its hardest and harshest form.

Yet, in this country and in other liberal democracies, people of faith are being increasingly subjected to a soft despotism in which ridicule, ostracism, and denial of employment opportunities for advancement are being used to marginalize us. We see this when butchers and bakers and candlestick-makers are being put into the legal dock for refusing to renounce their religious beliefs.

A new religious intolerance is being established in our country. We see this when Christian pastors are stalked and threatened for being “Christian” pastors, when social scientists are expelled from universities for having turned up “politically incorrect” facts, when charitable organizations and confessional schools are harassed if they take seriously their faith’s moral precepts and require their employees to support their missions. We see this in the refusal of the Administration to accommodate Catholic institutions and businesses because of their conscientious objection to subsidizing contraception and abortions.

Sometimes, we are told, “Keep your religion to yourself.” It is becoming almost the new conventional wisdom that religion is private. That faith is something to be practiced in the privacy of one’s home, by consenting adults, at that. Religious faith is personal but it should never be “private.” And professing a religious faith should not make anybody a second-class citizen or worse. But to stand up for the rights of conscience, could require us, as Jesus reminds in the Gospel today, “to deny ourselves and take up our cross daily.” This is the cost of discipleship â a cost that Thomas More and John Fisher paid courageously with their lives.

Of course, it is only one week since the tragic events in Orlando that saddened and shocked us all. We grieve for all victims and their families. On Wednesday, I spoke to a mother whose son was killed last Sunday in Orlando. He was buried yesterday from one of our parishes here in Miami. Her grief was a double grief â last month her mother died and this week she had to do what every parent dreads, to bury a child. She told me that she would never look at an image of the “Pieta” in the same way again. And anyone who has lost a child would understand what she meant.

Yet, in our confusion and in our anger, we must be careful lest we make truth another casualty in the aftermath of this lone-wolf terrorist attack. And to blame a particular religion or religion in general for this atrocity would do just that.

CNN's Anderson Cooper rejects Pam Bondi's expressions of sympathy because she opposed same sex marriage. The New York Times editorialized that the victims were "casualties of a society where hate has deep roots.” They weren't talking about ISIS's caliphate but America. And one bishop who should know better even opined, and I quote: “It is religion, including our own which targetsâ¦and often breeds contempt for gays, lesbians and transgendered people.”

Where in our faith, where in our teachings â I ask you â do we target and breed contempt for any group of people? In today’s second reading, St. Paul teaches us: “Through faith you are all children of God in Christ Jesus. There is neither Jew nor Greekâ¦ there is not male and female; for you are all one in Christ Jesus.” Our faith, our religion gives no comfort, no sanction to a racist, or a misogynist, or a homophobe.

In any case, Christians who support traditional marriage did not kill 49 people. Omar Mateen did. Religion and freedom of religion did not enable the killing and the maiming that we witnessed last Sunday. An evil ideology which is a corruption of Islam did.

The right to religious freedom has its foundation in the very dignity of the human person. Religious freedom is the human right that guarantees all other rights â peace and creative living together will only be possible if freedom of religion is fully respected.

Yet, even in the face of a growing intolerance of religion, we must as Catholics give witness. To fail to do so would be to fail in the charity we owe our neighbor. "Authentic witness," Pope Francis reminds us, "is one that does not contradict, by behavior or lifestyle, what is preached with the word and taught to others." (Solemnity of Saints Peter and Paul, 2015)

If we honor the memories of Thomas More and John Fisher, if we invoke their intercession today, it is because they would not contradict, by behavior or lifestyle, what they preached and what they believed.

Sts. Thomas More and John Fisher are “Men for this season.” May their example inspire us and their prayers sustain us.

Anne Schuknecht - 06/24/2016 10:01 PM
To Tom: Rest in the words of Jesus. Remember what He said to Peter, "You are Peter and upon this rock I will build my church and the gates of hell shall not prevail against it. The church is neverdoomed. Live joyfully in this knowledge. Blessings,Anne

Madelyn - 06/24/2016 04:07 PM
I was present at the Mass that our Archbishop Wenski presided and I gave a big hoorah for his homily. We do have good pastors that are leading the flock.

Gabriel - 06/24/2016 03:20 PM
Mr. Radewicz, I greatly sympathize with your sentiment. For the record, I'd like to point out that the person who wrote this article is Archbishop Thomas Wenski of Miami. It is, in fact, a homily that he publicly preached. So not all of our bishops and priests are failing their flocks; we have right here an excellent counterexample.

Tom Radewicz - 06/24/2016 04:27 AM
My goodness. How good it felt to read such good 'preaching'. If that person who wrote this article could visit every Catholic church this Sunday and give 'the sermon' we could reverse this trend that he mentions. We do not have any church leaders to take up this fight. Our Bishops and Priests are failing their flocks and if they don't come around soon then we're doomed.