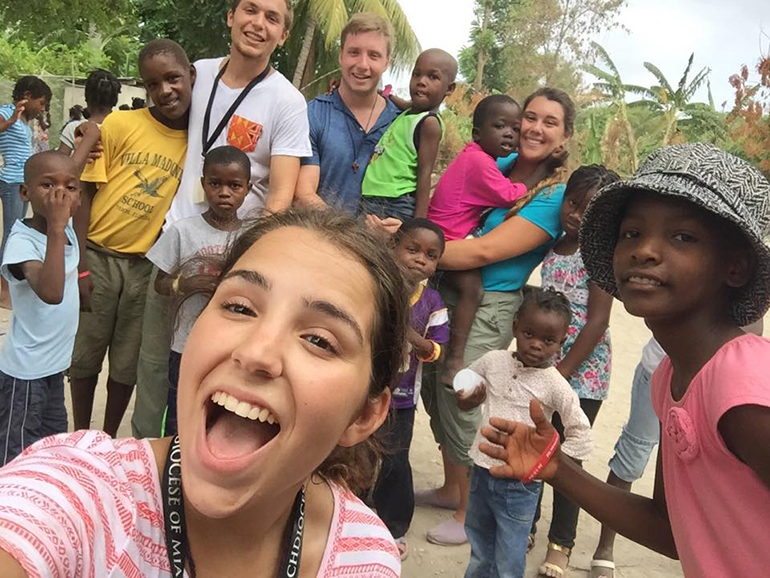 MIAMI | Living up to their group’s name â Amor en Acción/Love in Action â a group of young adult missionaries from Miami made their way to Haiti in mid-June for a 12-day mission trip in MÃ´le St. Nicolas.

A little town in the northwestern part of Haiti, MÃ´le St. Nicolas is in the Diocese of Port-de-Paix, the poorest in Haiti and also the sister diocese of the Archdiocese of Miami. The objective of the trip was to run a summer camp for the children in the area.

The group spent their days in MÃ´le St. Nicolas teaching almost 200 kids different lessons from the Bible, feeding them, and playing outdoor games with them. Each missionary was assigned one classroom and had at least one young adult leader from the town assisting them.

Amor en Acción is an archdiocesan lay missionary group that has been serving in Miami’s sister diocese for more than 30 years.

“This year’s summer mission to Haiti was moving, eye-opening, and a manifestation of the universal language of love,” said Rio, citing the missionary group’s name.

“The mission to Haiti was a complete success as well as an incredibly humbling experience,” said Erthal. “The community of MÃ´le Saint Nicolas were very welcoming while cooperating with us in order to ensure that the summer camp would be an amazing week for the children.”

The missionaries described the trip as an amazing and life-giving experience, even though the extreme poverty in the region was the most saddening part of the trip.

“Spending time in Haiti gave me a tremendous change of perspective as to how to see the world. We live so close to these people yet our realities are worlds apart,” Pannunzio said.

The most heartwarming thing the missionaries experienced was that the kids remembered them by their names, said Garcia. The missionaries and the people of MÃ´le are looking forward to next summer when they can all come together again.

Wuso, a special needs young adult from MÃ´le, phrased it best when he said, “Go, so you can come back well.”

Reporter Christy Piña was one of the missionaries who went on this trip. She is a graduate of Msgr. Edward Pace High School in Miami currently studying journalism at the University of Florida.