Who are Joe and Wini Amaturo? 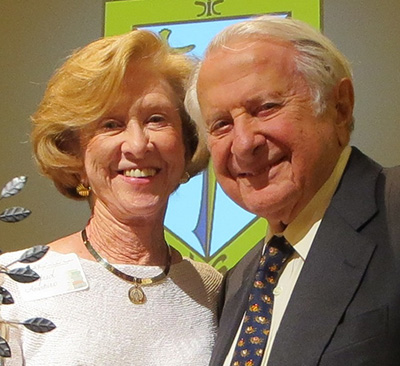 Wini and Joe Amaturo pose with the specially crafted "tree of thanks" they received in appreciation of their 10 years of financial support to Catholic school children via the implementation of Accelerated Reader and Math programs.

Joe Amaturo owned and managed 22 radio and television stations around the country, including South Florida-based JOY 107 FM, and served as chairman of the MUVICO Theaters.

He remains active in many local organizations, including the United Way of Broward County, the YMCA and the Urban League. In 1994, he was inducted into the H. Wayne Huizenga School of Business and Entrepreneurship's Hall of Fame at Nova Southeastern University.

He is an active and longstanding member of the board of the Broward Center for the Performing Arts. The Amaturo Theater at the Broward Center is named after Joe’s parents, and the couple’s gift included an endowment allowing free performances for Broward School children.

Last October, Wini Amaturo was among the first recipients of the Women of Faith award from Archbishop Thomas Wenski and the Archdiocese of Miami. She is a Dame of Malta, the president of the Amaturo Family Foundation, and has served on the boards of St. Thomas University in Miami Gardens, Boston College and Joe DiMaggio Children’s Hospital in Hollywood.

Both Joe and Wini are longtime advocates for Catholic education at all levels, even endowing a Chair in Catholic Studies at The Berkeley Center for Religion, Peace, and World Affairs at Georgetown University. In 2014 alone, the couple was honored by Chaminade-Madonna College Preparatory for helping struggling families afford the tuition for high school. Nova Southeastern University bestowed on them its highest honor, the President’s Award for Excellence in Community Service.

A decade ago, the Amaturos also donated the funds to build the Chapel of St. Anthony on the grounds of St. Thomas University.