'God calls us to give, but also to be grateful' 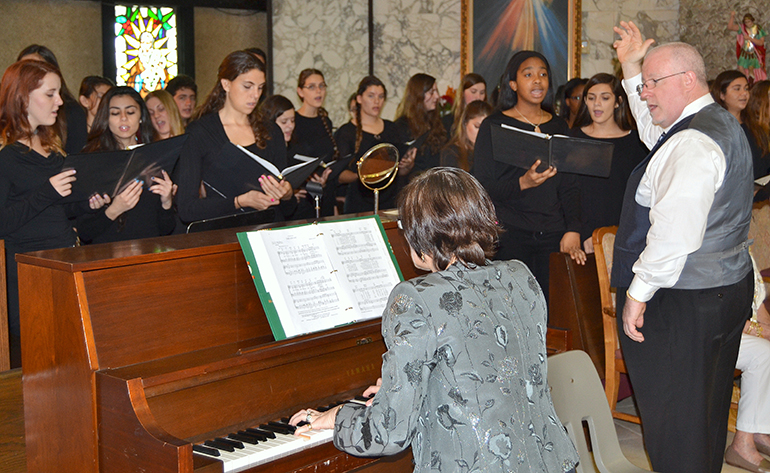 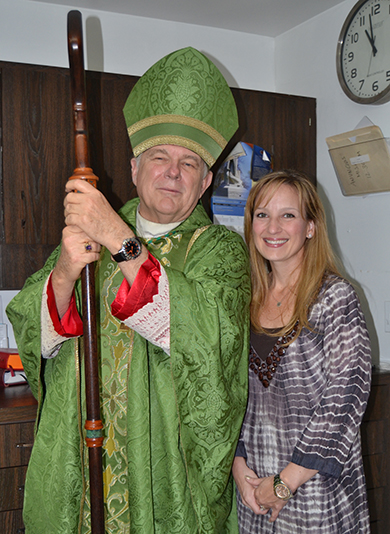 Archbishop Wenski poses with Katie Blanco Crocquet, president of the Archdiocese of Miami Development Corporation, before the ThanksForGiving Mass.

WILTON MANORS | As families planned Thanksgiving dinners, Archbishop Thomas Wenski did some thanksgiving of his own -- to those who have supported the archdiocese and its good works over the past year.

"Today I want to thank you for your courage, for your faith," he said to 400 listeners at the third annual ThanksForGiving Mass, celebrated for those who have donated to the annual Archbishop’s Charities and Development Campaign (ABCD). "At a time when many would want to write off the Church as irrelevant ... you still invest your time, talent and treasure in supporting her mission in the world." 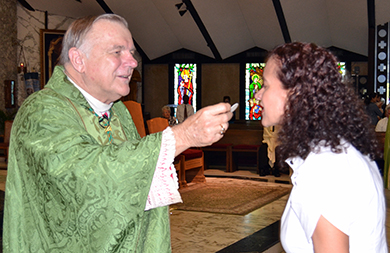 The Nov. 16 Mass, held at St. Clement Church, was the first such event in Broward. Previous ThanksForGiving Masses have been at St. Mary Cathedral in Miami.

"God calls us to give, but also to be grateful," said Katie Blanco-Crocquet, president of the Archdiocese of Miami Development Corporation. "At the archdiocesan level, we can all accomplish so much. And it's important for us to show the impact."

St. Clement's was chosen for its capacity for a large gathering, as well as its demographic diversity, the archbishop said in an interview. During the Mass, he added a more personal angle: He frequently visited as a priest during 1980-81, to minister to Haitians there.

"To me, this is almost like a homecoming," Archbishop Wenski said.

For Father Robes Charles, St. Clement's pastor and concelebrant at the ThanksForGiving Mass, said it was an "honor for us as children of the archdiocese. And it's an honor not only for this parish, but for all the churches in Broward." 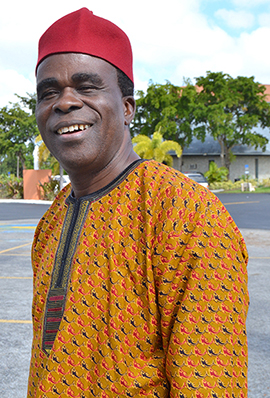 The 400 in the congregation amounted to twice as many as those who sent RSVPs, Blanco-Crocquet said. Hundreds more were expected at a separate Mass at St. Mary's on Nov. 23.

At that date, the honorees of the three main awards for the Mass -- One in Faith, One in Hope and One in Charity -- will be named.

Some at the Mass talked almost as if they'd already gotten awards.

"As Catholics, we're used to being asked for money," Sheila Jackson, a lector at St. Bonaventure Church, said with a smile. "But it's almost unexpected to hear 'Thank you.' It feels good."

Gerry Depken of St. John the Baptist Church, a regular giver to the ABCD, agreed. "It was a nice Mass. Everyone likes to be thanked."

In his homily, Archbishop Wenski related the Gospel reading -- of the Rich Man and the Talents -- with need to be "risk takers" for doing good and making the Church "come alive in our world." 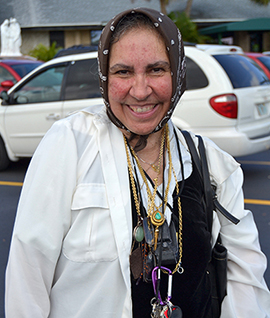 Esther Castillo Price from of Our Lady Queen of Heaven Church was among the more than 400 attendees at the third annual ThanksForGiving Mass, celebrated on Nov. 16, at St. Clement Church, in Broward.

"I want to thank you for having assumed the risk of investing in your Church through your giving to the ABCD. You have helped our local Church to produce much fruit."

Later, over punch and cookies at the parish hall, attendees talked out their feelings about the Mass.

"Having the archbishop come up to Broward and thank the people, it felt like we were recognized," said Theodore Veskosky, who coordinates the Eucharistic Ministry at St. Gregory Church along with his wife, Donna. "We didn't have to go to Miami. He came here to thank us."

Emmanuel Okwor of St. Helen Church, where he collects food from markets to donate to the food ministry, echoed the sentiments. "I'm grateful that the bishop came to his subjects, that he is appreciative of us giving back to the Church. We're helping him help those who are less privileged."

Esther Castillo Price of Our Lady Queen of Heaven Church even predicted that the archbishop's thank-you would have a positive feedback on the ABCD.

"For him to say 'Thank you' is a beautiful thing, and all the people appreciated it very much," Price said. "And they're going to be even bigger donors now."