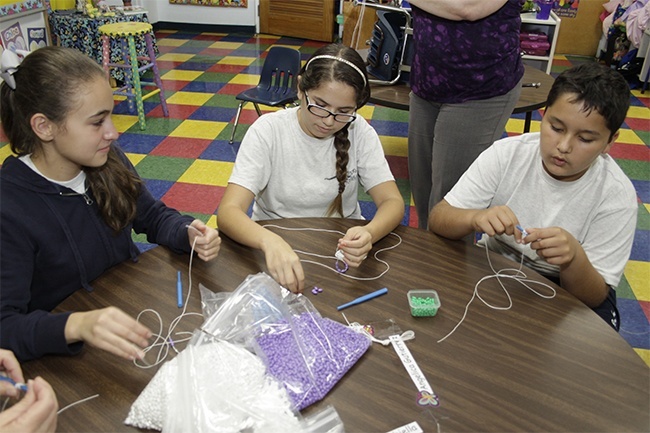 Our Lady of the Lakes sixth-grade rosary makers Isabella Suarez, Jennifer Espinosa and Jonathan Colon start their work during a recent club meeting. 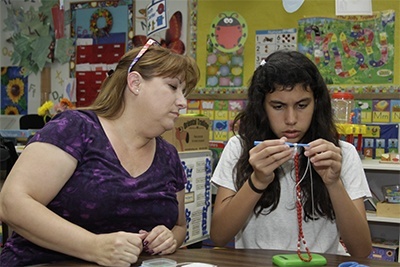 Our Lady of the Lakes teacher Alina Falcon helps sixth-grader Vanessa Perez-Robles make the knot that symbolizes the Our Father on the rosary.

MIAMI | More than just bits and pieces used for crafts, beads and strings knotted into rosaries are helping to bring people together and make a difference in the lives of others, locally and globally.
"It's incredible what a string, a knot, and the simple movement of hands can do â and we accomplished it," said Any Rincon, president of Hope for Kasai, a non-profit organization whose mission is to help underprivileged children in Kasai, a region in the Democratic Republic of the Congo.
Rincon had reached out to Sister Lourdes Serrano of Archbishop Coleman F. Carroll High School in Miami for assistance in gathering items for the children in Kasai. She initially sought help from the school's Key Club, hoping to obtain items such as pencils and paper to take to Kasai. But Sister Lourdes noticed the rosary Rincon wore around her wrist, which her mom had taught her how to make when she was young. Sister Lourdes saw it as an opportunity to help students from the school also learn how to make rosaries, and then sell them to raise money for Hope for Kasai.
"It's easy to give money," said Rincon. "I wanted them to give of their time and effort."
Since September of last year, Rincon has become a part of Sister Lourdes' senior year campus ministry class curriculum. She came in and told the students all about the mission, and they were motivated to help.
"It involves string, beads, knots, handwork and time," materials which she brings from her home country of Colombia and supplies to the students, said Rincon. "They get excited with each rosary they complete, knowing that each one sold would help a child eat or go to school." 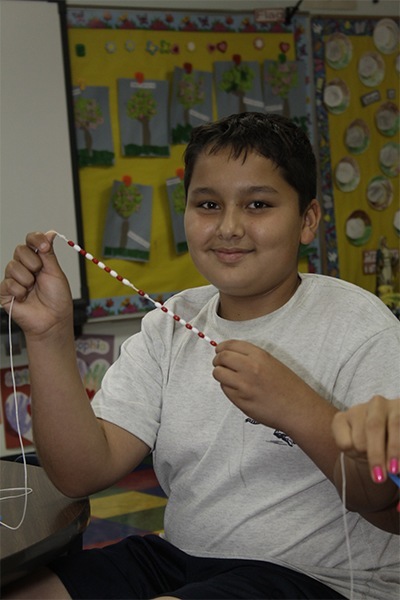 Our Lady of the Lakes sixth-grader Jonathan Colon holds up his partially made rosary.

The money raised helps fund mostly educational needs, such as school supplies, teachersâ salaries and building construction, along with meals for the students in a place where, as Rincon and Sister Lourdes recount, 10 kids share one pencil, and a sheet of paper is split into four pieces so they can all have something to write on. Maternity needs and medical supplies are limited.
"It fills their hearts to know that other people are thinking of them," Rincon said. "It gives them hope to know that kids in Miami are thinking of them and helping them, with their own hands."
Rincon says the participation of the students at Archbishop Carroll High goes far beyond giving a monetary donation to the kids in Kasai.
"When you touch someone's heart, even with a tiny grain of sand, that's what brings meaning and value to the efforts we're making," she said. "These kids are touching a lot of hearts."
"They really enjoy doing it. It's relaxing, has created a sense of camaraderie, and they're being productive while still being able to talk to one another," said Sister Lourdes. "It has created a bond within this class, which as peer leaders they need to have in order to be leaders on a retreat and work together."
The rosaries, which they began selling halfway through the school year after getting some initial practice, sell for between $3-$10 depending on the material used â from plastic to wooded beads and neon to pastel colors. They were sold at school events such as picnics and dances. At the end of the school year the campus ministry students presented Rincon with a $250 check, which she will take to Kasai during her upcoming visit this month.
"They're really excited to have raised so much in such a short amount of time, and they know where the money is going," said Sister Lourdes.
For senior Devan Cinalli, the highlight of this experience has been getting to know Rincon, whom she considers to be a giving, kind and touching person.
"She was always very humble, generous and patient with us," she said. "At first it was hard to learn, but she was very patient and very good at what she was doing, explaining everything along the way, and always enthusiastic about teaching us how to make a new type of rosary bracelet or if she brought new materials for us."
She said that all the students were very excited to purchase the rosary bracelets and wanted to help once they learned more about the mission.
With the help of the kids who have already learned to make the rosaries, they plan on continuing the project next school year.
Meanwhile, another rosary-making group in the archdiocese is using their work to benefit the local community. St. Bernadette Church in Hollywood recruits fourth to sixth grade students from their school to be a part of the Junior Legion of Mary.
They begin their weekly meetings by praying the rosary, discussing their assigned readings, and making rosaries to both give to the school and to send to the military, depending on the requests received.
âWe encourage them to learn about Mary and to spread the word of God to their families and peers, and to recruit others to join them,â said Melba Santilli, president of the Legion of Mary at St. Bernadatte. âIt teaches them how to get along with each other.â
Members of the adult group, which also meets weekly, teach religion at prisons and take rosaries to the inmates, which they make during their weekly meetings.
At Our Lady of the Lakes School in Miami Lakes, rosary-making is used as an activity to bond with students. Pre-kindergarten teacher Alina Falcon said she learned how to make rosaries by watching a video on YouTube. She wanted to give them to former students who were making their first Communion. She bought the rosary-making kit from Our Ladyâs Rosary Makers in Louisville, Ky., and mentioned her idea to Claudia Karlesky, a third grade teacher at the school. Karleskey loved it, seeing it as a great opportunity to reconnect with the kids they once taught.
âWe miss the older kids so we saw this as a chance to interact with them again,â said Falcon.
Since Easter, Falcon and Karleskey have met once a week after school with a group of 10 sixth through eighth-graders. They begin each session by praying the Chaplet of Divine Mercy, and they also provide snacks for the kids to enjoy. 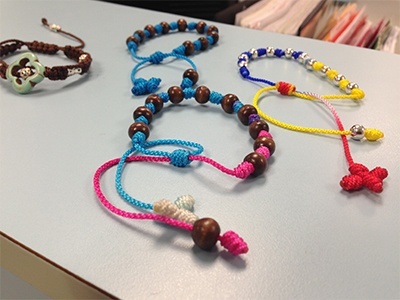 Archbishop Coleman Carroll campus ministry members create these rosary bracelets which they sell on campus to support the Hope for Kasai Project in Congo.

"We wanted it to be more of a prayerful ministry than a club, but also a safe place for them to hang out and have a good time," said Falcon, adding that the kids have caught on quickly and have really been enjoying the activity.
âItâs something new to do and itâs always good to have a religious club or ministry,â said sixth-grader Amanda Villanueva.
âI wanted to come closer to God â and teach my mom because she likes to sew and knit,â said sixth-grader Jonathan Colon.
Eventually, club members hope to send the completed rosaries to the missionaries. But for now they are still practicing the craft. They gave their first set of 40 completed rosaries to the schoolâs teachers, who sometimes stop by to try their hand at the ministry.
The next step is to give them to the pastoral care ministry at the church, which will distribute them to the sick and elderly of the parish. Eventually, club members want to send rosaries to their sister school in Haiti along with their monthly monetary donations.
"The goal for next year is to also make it more into a service learning project, which our principal strongly believes in, to learn more about Haiti and where the money and supplies are going," said Falcon. 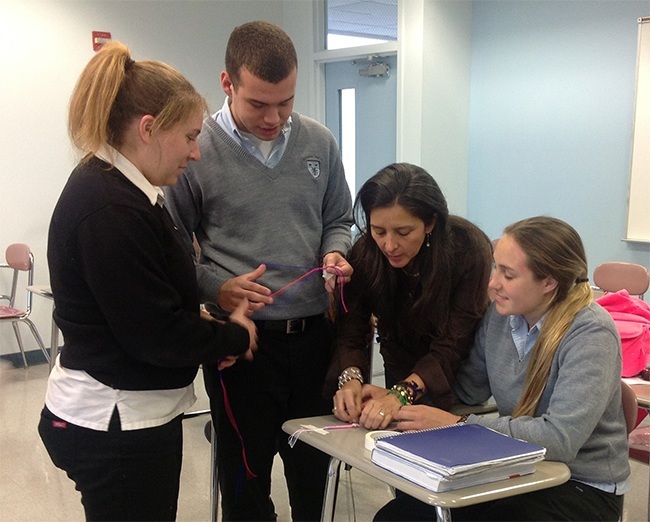