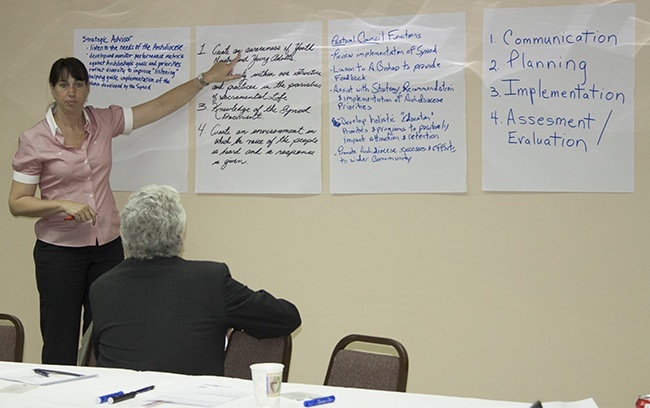 Synod Director Rosemarie Banich leads the discussion for members of the task force on the archdiocesan pastoral council.

MIAMI | With less than two dozen stops â that is, meetings â remaining, the Synod train is nearing the station.
The journey that began at the chrism Mass in March 2012, continued through 14 listening sessions last summer, and chugged through nearly 80 focus and SMART goal team meetings from September through April, will definitely end at a closing Mass and assembly set for Oct. 26.
At that time, according to Synod Director Rosemarie Banich, the final Synod goals will be announced â goals that have been winnowed down from hundreds of recommendations and suggestions; goals that have been put into SMART format, which stands for: specific, measurable, attainable, relevant and timely. Those goals will be key elements of the archdioceseâs three-year pastoral plan, and some may begin to be implemented as soon as the 2014-2015 budget year.
Right now, the meetings continue:
That integration team is âthe final step in the Synod process,â Banich said. 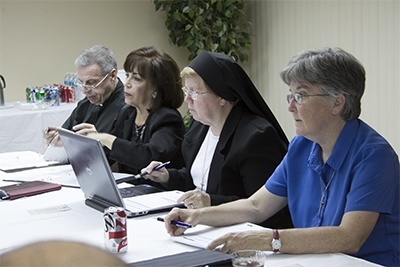 Members of the Synod task force on an archdiocesan pastoral council at their most recent meeting, from left: Msgr. Pablo Navarro, Vilma Angulo, Sister Elizabeth Worley and Sister Kathleen Carr, both Sisters of St. Joseph of St. Augustine.

The team is composed of just 10 people â three from the Synod leadership team, which ended its meetings in January; three selected from the focus teams; and four who are key employees of the Pastoral Center. Their job is, as their name implies, to look at all the SMART goals and eliminate duplication.
A good example, said Banich, would be in the areas of formation and leadership training, which a lot of the focus teams included in their goals. The job of the integration team is to turn those duplicated goals into one SMART goal that could apply across the board to the whole archdiocese.
Their other job is to look at those goals and determine the resources â money, people, time â each goal will require to be put into action. The focus teams were asked to weigh in on that âbut it was very preliminary in nature,â Banich said. The integration team will actually be âassigning those figures as far as dollars, man hours and other commitment of resources.â
Four other teams also are meeting concurrently with the implementation team. These are task forces whose role is to devise a structure, determine the role, and suggest the characteristics of the people who will serve on four archdiocesan boards.
One already exists: the finance council. Three more will be created as an offshoot of the Synod: an archdiocesan pastoral council, an archdiocesan school board, and an archdiocesan development council. These boards, as their name implies, will advise Archbishop Thomas Wenski on items of a pastoral nature, that is, ministries; on matters of education and faith formation; on money and budget matters; and on ways to raise new revenue for the archdiocese.
The goal of these concurrent meetings is not to have a five-year gap â as happened with the archdioceseâs first Synod â between the beginning of the Synod and the creation of a pastoral plan. The first Synod began in 1988 and the pastoral plan was published in 1993.
âThis integration period is meant as that bridge so that instead of taking five years to convert the Synod findings into an archdiocesan plan, that bridge is the integrated plan,â Banich said. âIn order words, weâre bringing everybody into the room during the Synod still, who is necessary in order to determine budgets, in order to be ready to move forward on these goals as soon as possible.â
The first archdiocesan Synod listed about 600 items in the pastoral plan. There will not be that many this time.
âMany wonderful things were accomplished as a result of the first Synod, many important things. However, when you have a list of close to 600 items, if 150 are accomplished, thatâs still a very low percentage rate. But 150 items is a tremendous amount of work accomplished,â Banich said. âOur format and our approach have been really different. Thatâs why we insisted on SMART goals as being the ultimate end point for each focus team.â
She stressed, however, that âthe Synod process is not to be confused with what Archbishop Wenski adopts as the operating plan for the next three years,â although the synod plan will greatly inform the archbishopâs plan.
INTEGRATION TEAM MEMBERS
From the Synod leadership team:From the focus teams:From the Pastoral Center:
âThe Synod is a process of listening to the people of God in order to provide counsel and recommendation to the archbishop in developing his pastoral priorities and plan,â Banich said. âCertainly it is the intention of everyone that the initiatives are going to be in a position where theyâre going to be acted upon within the next budget year (July 2014-June 2015). Weâll see some items being addressed right away.â
When she first took on the position of Synod director, she described her role as âconductorâ of the Synod train. Indeed, Banich has been conducting nearly non-stop for the past year-and-a-half. She attended all the listening sessions and moderated many of them; read the suggestions of the 4,000 or so people who participated, either in person or by mail; and led nearly all of the synod meetings â leadership team, focus teams, SMART goal teams, task force teams and integration team.
What will she miss most as the Synod winds down? The meetings, of course.
âI just miss the great minds working for the Church and (their) enthusiasm. This is the best part of my job,â Banich said.

Members of the Synod task force on an archdiocesan pastoral council at their most recent meeting, from left: Homero Cruz, Debbie DeLeon, John Cooper and Patrick McGrath.