As Havana's cardinal prepares to retire, when will replacement be named? 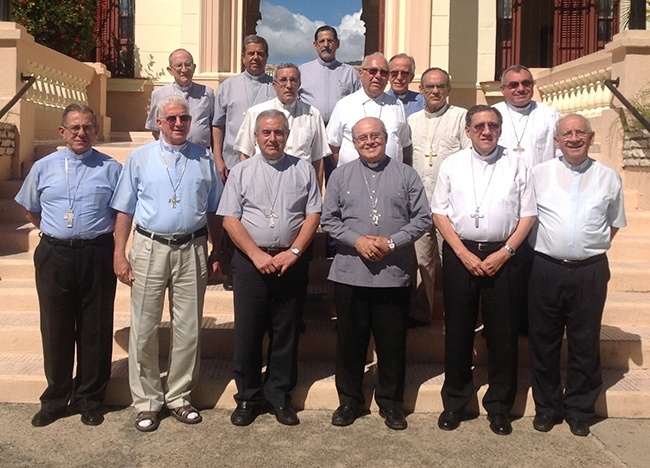 Pictured: The bishops of Cuba's 11 dioceses, including Havana's Cardinal Jaime Ortega, front row, third from right. Cuba has eight bishops, three archbishops (including the cardinal) and two auxiliary bishops, both in Havana. To his right is Archbishop Bruno Musaro, papal nuncio to Cuba.

HAVANA, Cuba | As new leaders took the helm of the Cuban bishopsâ conference after their regular assembly in November, the absence of the Archbishop of Havana, Cardinal Jaime Ortega, in any leadership position triggered speculation that he will be replaced soon â but perhaps not so soon.
When Cardinal Ortega presented his resignation two years ago, at the Vatican-mandated age of 75, the Church in Cuba was about to celebrate a Marian Jubilee year, commemorating the 500th anniversary of the finding in 1612 of the image of Our Lady of Charity in Cuban waters.
Friends at the Vatican
Recently, several Cuban bishops, including Cardinal Jaime Ortega, have made trips to Rome. In their visits they can find old friends from Cuba now serving in the Vatican.

One of them is Archbishop Giovanni Angelo Becciu, 62, who was named apostolic nuncio to Cuba in 2009. During his ministry in Cuba the Church played a significant role in the release of political prisoners. In 2011 he was called to be the substitute for General Affairs at the Vatican Secretariat of State and, as such, he is in direct contact with the pope.

Another friend of the Church in Cuba is the current head of the Vatican Congregation for the Clergy, Archbishop Beniamino Stella, who was apostolic nuncio in the island from December 1992 until the spring of 1999. His appointment encompassed the difficult years known as the âspecial periodâ that followed the fall of the Communist block and the subsequent loss of the Soviet subsidies to Cuba.

During Archbishop StellaÂ´s service, four new dioceses were created. He was a discreet and effective presence who helped improve relations of the local bishops with the government.

While it is the General Assembly of the Congregation of Bishops that must approve any episcopal candidate before submitting his name to the pope, the presence of these two men close to Pope Francis, their contacts with visiting Cuban bishops and their knowledge of the Cuban Church and country can be of great help in the process of replacing the Archbishop of Havana.
It is most likely that the pope â Pope Emeritus Benedict XVI â would have held off on accepting his resignation, and naming a new archbishop of Havana, until the end of the Marian jubilee and the Year of Faith.
But having presented his resignation in 2011, Cardinal Ortega could not be up for election to a three-year term of responsibility with the Cuban Catholic Bishops Conference (COCC by its initials in Spanish).

And now that both the Marian jubilee and the Year of Faith are over, is the archbishop of Havana to retire soon, as reports in the media suggest? Not so soon, perhaps. He will celebrate the golden anniversary of his priesthood in August 2014. If his good health holds up, Rome may allow him to remain archbishop of Havana for that celebration.
In the mean time, the search for his replacement has already begun, at least among Church analysts and members of the media outside the island.

Pastoral considerations
Eduardo Mesa is a Cuban Catholic who for years headed the magazine of the Archdiocese of Havana: Espacio. Now living in Miami, he believes that Cardinal Ortegaâs replacement will be chosen from among the bishops now serving in Cuba. In his blog âCuba Pluralâ he writes that given the complexities of the Havana archdiocese and of Cuba, it is not likely that a priest would be chosen for that job. The possibility of appointing a Cuban bishop now serving outside of Cuba always remains open, but is not probable.
The Church in Cuba has 11 dioceses, eight bishops, three archbishops (including the cardinal) who head each of the ecclesiastical provinces, and two auxiliary bishops, both in Havana.
In selecting the future archbishop for Cubaâs capital, Pope Francis could consider several aspects: his age and overall health, his pastoral profile and experience, and the complexity of the country and of the dioceses involved.
Among the Cuban bishops there are two who left the country in the 1960s, were ordained abroad and returned years later. Two bishops are late vocations and had professional careers before becoming priests. One is from Spain, and most have grown up in the revolutionary era and are well acquainted with the ways of the current political system.
The age of the candidates will determine their number of years on the job. It is unlikely that Ciego de Avilaâs Bishop Mario Mestril would be considered as he is now 73 and in two years will have to present his resignation to the pope.
Should the pope want a âtransitionâ archbishop, in terms of the number of years he could serve, he might select Pinar del RÃ­oâs Bishop Jorge Serpa PÃ©rez, 71, who served 31 years as a missionary in Colombia. Upon returning in 1999 he served as vicar general of Havana and as rector of the seminary â services which make him no stranger to the archdiocese. 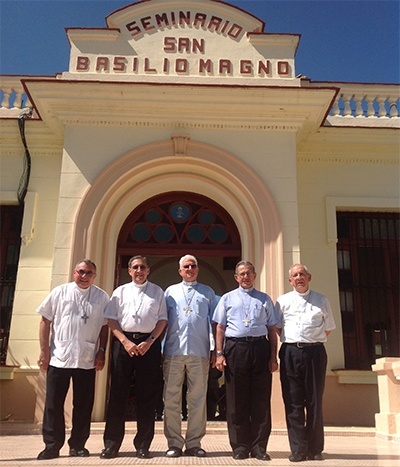 Matanzasâ current Bishop Manuel Hilario de CÃ©spedes would also be a transition archbishop. Now 69, he was born in Havana, emigrated to Puerto Rico in 1960, became an electronics engineer and later entered the seminary for late vocations in Venezuela, where he was ordained and served for 12 years. In 1986 he returned to Cuba, serving as chancellor and vicar general in Pinar del RÃ­o until he was appointed bishop of Matanzas in 2005. He is the great-great grandson of Carlos Manuel de CÃ©spedes, one of Cubaâs founding fathers, and according to civic activist Dagoberto Valdes, who worked closely with him in Pinar del RÃ­o, he is a man with a vision for the future.
One year younger is Santiagoâs current Archbishop Dionisio Garcia, now 68. Analysts say he has performed well during the past three years as president of the bishops conference. He pursued his vocation to the priesthood after years of professional life as a communications engineer. He is from Guantanamo, an eastern province, where he served as a priest before being named, in 1995, founding bishop of the Diocese of Bayamo-Manzanillo, also in eastern Cuba. In 2007, he was appointed to Santiago, the second most important city in the island.
Bayamo- Manzanilloâs current Bishop Alvaro Beyra, also 68, is from CamagÃ¼ey and one of the few Cuban bishops who did a portion of his studies in Europe.

Younger bishops
Beyond this group, the pope might consider a number of younger bishops. Among them is HolguÃ­nâs Bishop Emilio Aranguren, now 63, and the most senior bishop in Cuba after the cardinal. Born in Santa Clara, he became auxiliary of Santa Clara in 1991 and bishop of Cienfuegos, in Cubaâs central region, in 1995. Since 2005, he serves in HolguÃ­n, in eastern Cuba. For 14 years he was secretary general of the bishopsâ conference, with headquarters in Havana, a job that gave him ample opportunities to relate to representatives of the bureau of Religious Affairs in the Central Committee of Cuban Communist Party. He has also served as president of the Economic Committee of CELAM (Latin American bishops conference) and is well connected to other Latin American prelates.
According to Mesa he is a good candidate because âhe has great capacity for work, is a good administrator and has pastoral vision.â But this scenario would affect the Diocese of Holguin, which has already been subject to quite a bit of change.
Of the same age range are: Guantanamoâs Bishop Willy Pino, a native of CamagÃ¼ey, and Cienfuegosâ Bishop Domingo Oropesa, born and ordained a priest in Spain. Neither of these names has come up in the media reports as candidates for the Havana archdiocese.

Diocesan dominoes
One appointment that would be simpler in terms of its effect on other dioceses might be that of Bishop Juan de Dios HernÃ¡ndez, 65, a Jesuit since 1974 and auxiliary bishop of Havana since 2006. As such, he already knows the archdiocese, has good rapport with the clergy and, being a Jesuit, is well acquainted with the issues that religious life faces in Cuba.
New leaders at Cuban bishops conference
The new leadership for the Cuban bishops conference includes Santiagoâs Archbishop Dionisio GarcÃ­a who, as customary, was reelected president for a second term.

The other positions in the conference remain unchanged: Bishop Juan de Dios HernÃ¡ndez, SJ, auxiliary bishop of Havana, is the secretary general. The assistant secretary is Msgr. JosÃ© Felix PÃ©rez Riera, who is not a bishop.

Continuing to serve on the Permanent Committee are: CamagÃ¼ey Archbishop Juan GarcÃ­a and HolguÃ­n Bishop Emilio Aranguren.
Considered a âteam player,â his nomination would not cause a domino effect of changes in other dioceses. His appointment would only require the appointment of auxiliary bishops for the Archdiocese of Havana, but that will have to happen soon enough, given the health of the other auxiliary, Bishop Alfredo Petit, who is 77.
A name that rarely is mentioned by the media as a possible candidate is that of CamagÃ¼eyâs current Archbishop Juan GarcÃ­a, now 65. He is very much a bishop in the style of Pope Francis: known for his missionary spirit and as a man of prayer with the ability to remain calm in the midst of any storm.
He has served as president of the Cuban bishopsâ conference (2006-2009) and as such represented Cuba in the Latin American and Caribbean bishopsâ meeting at Aparecida, Brazil, in 2007. Quiet and reserved, he served as auxiliary to CamagÃ¼eyâs late Archbishop Adolfo RodrÃ­guez, whom he succeeded in 2002. And while his move to Havana would require that he be replaced, both the bishops of GuantÃ¡namo and Bayamo are products of the Archdiocese of CamagÃ¼ey who could well take his place. Replacing them might be easier because their dioceses are smaller.
The youngest bishop of all is Santa Claraâs Bishop Arturo GonzÃ¡lez, now 57. His appointment would mean 17 years of possible service in Havana before reaching the retirement age of 75. He currently has the important task in the Cuban bishopsâ conference of overseeing the relationships with Cubans in the diaspora but his appointment to Havana would mean bypassing other bishops with more experience and years of service.
According to Catholics in Cuba, who will speak only off the record, all of the above scenarios revolve around strategic and practical considerations. They add that the future of the Church in Cuba might require that these be ignored. 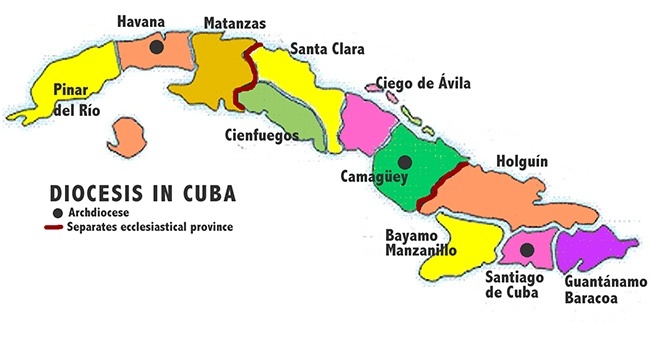