Catholic lawyers honor one of their own 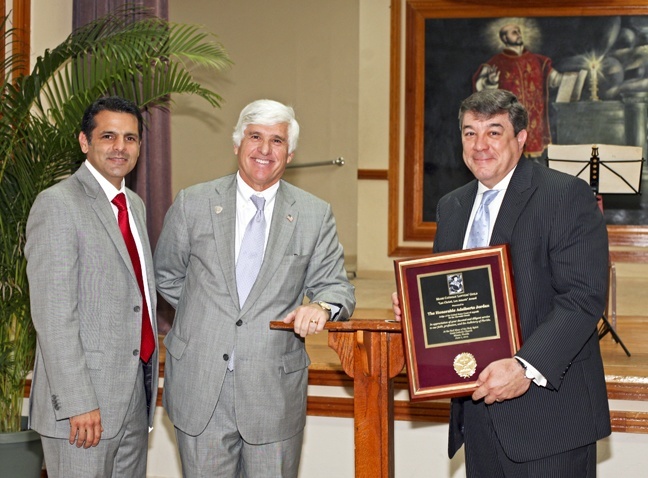 Posing at the reception that followed the Red Mass, from left: William Trueba, Jr., president of the Miami Catholic Lawyers Guild, Judge Federico Moreno, chief judge of the U.S. District Court for the Southern District of Florida, and Judge Adalberto Jordan, of the U.S. Court of Appeals for the 11th Circuit and recipient of the 2012 "Lex Christi, Lex Amoris" award.

MIAMI â In the late 1970s, a teenaged Adalberto Jordan served as an altar boy at Masses celebrated by newly-ordained Father Thomas Wenski at Corpus Christi Church. More than 30 years later, the two met again. Now, one is an archbishop, the other a federal appeals court judge. 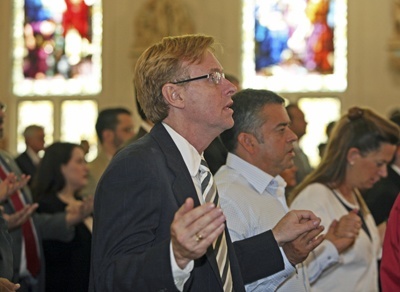 âItâs a special honor to receive the âLex Christi, Lex Amorisâ award with Archbishop Wenski here,â said Jordan, 50, who serves on the 11th Circuit of the U. S. Court of Appeals, during a reception following the Red Mass at Gesu Church. The Miami Catholic Lawyers Guild sponsors the annual event. The Red Mass started in the 13th century in order to pray for the wisdom of the Holy Spirit at the official opening of the European courts.

On Feb. 15, the U.S. Senate confirmed President Barack Obamaâs nomination of Jordan to the court. He is the first Cuban-born judge to be appointed to the federal court of appeals. The 11th Circuit includes Florida, Georgia and Alabama. In his 25-year law career, Jordan has reached a position which few â currently 167 judges â in the legal profession reach. 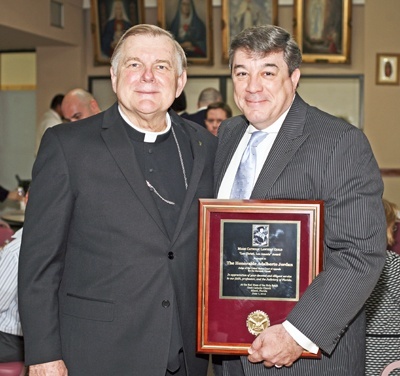 Archbishop Thomas Wenski and his former altar server Adalberto Jordan, now a judge on the U.S. 11th Circuit Court of Appeals, pose for a photo after the Red Mass reception, where Jordan received the "Lex Christi, Lex Amoris" award from the Miami Catholic Lawyers Guild.

Jordan received his law degree from the University of Miami in 1987. He clerked for U.S. Supreme Court Justice Sandra Day OâConnor from 1988 to 1989, and worked as an attorney for Steel, Hector and Davis from 1989 to 1994. In 1994 he moved to the public sector as an assistant U.S. Attorney for the U.S. District Court for the Southern District of Florida, becoming chief of its appellate division in 1998. In 1999, the Senate confirmed him as a judge on that same court.

Jordan has coordinated the retention of attorneys for the U.S. District Courtâs pro bono program for the past 10 years. The program serves poor litigants. He conducted a continuing legal education class for the benefit of the Catholic Lawyers Guild and he volunteers as a coach for the girlsâ soccer team at St. Brendan High School in Miami, where his wife, Esther, teaches. He and Esther are alumni of St. Brendan, as are their two daughters.

The Miami Catholic Lawyerâs Guild exemplifies the values of St. Thomas More, the patron saint of lawyers and politicians. He was a late 15th century to early 16th century attorney and statesman who refused to accept King Henry VIII as supreme head of the Church of England.

âSt. Thomas More was the kingâs good servant,â said Archbishop Wenski in his homily. âBut he was Godâs servant first. As Americans we do well to recall his example and to seek his prayers.â